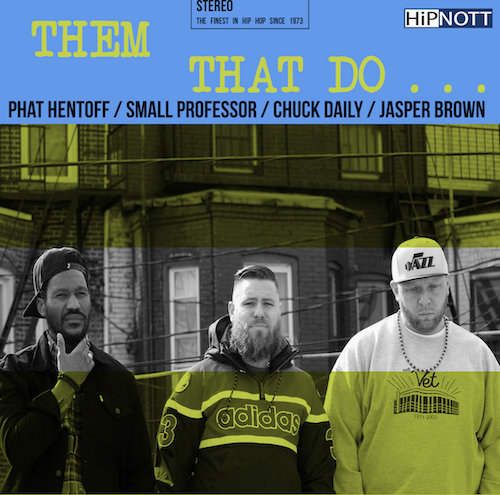 Do WHAT? Do WORK.

Them That Do is the latest rap group to form around the nucleus of a skilled production wizard, and happily in this case it’s the underappreciated Small Professor. I’ve said for years the only thing you could possibly say bad about Small Pro is that he needed to link up with some emcees and see how far his beats could go with the right rhymes. The gauntlet was thrown down and three men stepped up to meet the challenge — Phat Hentoff, Chuck Daily and Jasper Brown.

I’m going to nitpick a little bit about the term “supergroup” being thrown around in their bio, so if you don’t care about semantics you can skip ahead one paragraph, but I feel that it needs to be addressed real quick. The root words “super” and “group” may in fact be accurate when it comes to the talent when it comes to Them That Do, but them that follow the hip-hop scene for a long period of time know a “supergroup” means individual talents already well respected on their own coming together in a previously unexpected collaboration. Example: Joe Budden, Crooked I, Royce Da 5’9″ and Joell Ortiz were all dope solo, but when they formed Slaughterhouse it was a GROUP of rap SUPERSTARS who made each other better as they played off each other’s bars and simultaneously tried to one-up their cohort’s scene stealing performances. A “supergroup” should therefore have names that are already big in it. Would anybody have cared about the Damn Yankees if it was just four different musicians from bands nobody heard of before? Other than Small Pro, you won’t know Them That Do going in, so let’s pick a different word other than “supergroup” for it.

One thing I picked up on right away on Them That Do’s self-titled album is that Small Pro couldn’t resist riffing on The Pharcyde for the beat to “No Better Blues,” and I’m not mad at it at all. There’s probably even an analogy to be drawn between the two groups, in terms of the individual members being talented but little recognized until they came together as a unit. The hook references Langston Hughes’ “Montage of a Dream Deferred,” and although the group’s membership hails from Philadelphia, there’s certainly another analogy to be drawn if you want to compare their home to Harlem. To get ahead in either environment is equal parts hard work, charisma, talent and a good break. If you don’t get that break though it can all be for naught, leaving you singing those “No Better Blues” and watching as your dreams go passin’ you by. “Can I live? It’s not just a figure of speech.”

The group has enough cohesion that they don’t really need to bring in any big names, and with Small Professor producing the tracks there’s a baseline of quality you can rely and count on for all 59 minutes of the album. Therefore Them That Do have the rare ability to be choosy about who they do collaborate with, and you can see that like-minded hip-hop artists show up on the few guest appearances here. Curly Castro collabs on the aptly named “Supercool 223,” Jahdan Blakkamoore joins the Nas inspired “Four Fifth,” Georgia Anne Muldrow adds beautifully to “Trying to Say” and Muhsinah can be heard on the album’s first single/video “Arrowheads.”

A press kit accompanying “Them That Do” describes the group and their album as “jazz infused hip-hop,” and while I’d normally prefer to avoid borrowing from the hyperbole of a press release, there’s honestly not a better way to describe what TTD is doing or what Small Pro brings to the table for them. They take chances on this album with songs like “In the Wilderness,” singing (and most importantly without using AutoTune) instead of rapping, exploring the melancholy mood that Small Pro’s piano background creates. That’s the “jazz” element of this hip-hop – the artists follow the notes as opposed to vice versa – creating a genuine musical collaboration like a jazz ensemble. The emcees play off of the beats rather than overpowering them, and the lyrics are thoughtful reflections on life, not tired platitudes about achieving wealth and displaying it in the most ostentatious manner possible. That’s not to say Them That Do are They That Act Holier Than Thou, because everybody loves to drink and smoke sometimes, but there’s a Native Tongues aesthetic here that puts all of life’s elements into perspective and doesn’t just let one vice or virtue dominate all of the others. I’d say that makes Them That Do they who are worth listening to.