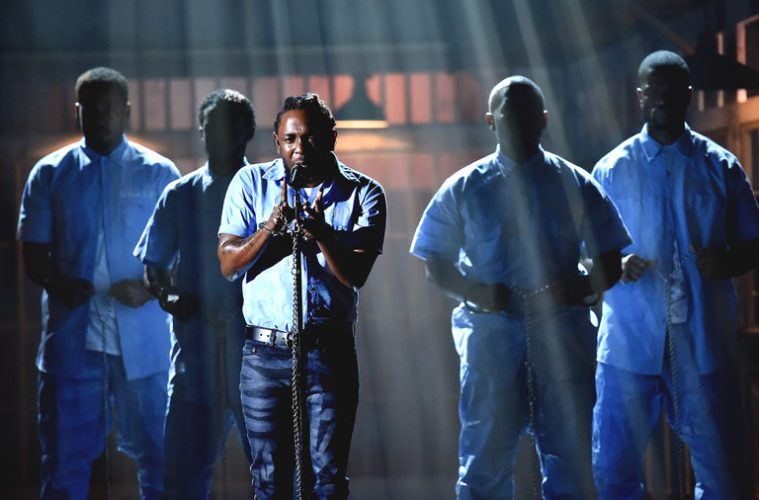 We’re a little more than a week removed from Kendrick Lamar’s explosive performance at the Grammys, and what struck me most wasn’t his powerful lyrics, or the eye grabbing visuals, it was the reaction many of his fans had to it.

Before Kendrick was even halfway done, my Twitter timeline exploded with people gleefully saying how angry white people must be at seeing his performance (this was actually tweeted by people of all races). A few minutes in came the real piece de resistance – a crowd shot on TV that showed a few white celebrities in the audience who each had a serious look on their face.

Twitter instantly became filled with attempts at memes lambasting these folks, claiming these white people wanted nothing more than to yank Kendrick from the stage. Unfortunately for Kendrick, those types of reactions by his fans are a huge hindrance to his ability to reach his full potential as an artist.

The image of the white celebs could have been an incredibly relevant one, but Kendrick’s fans, in our social media age which triumphs snark over smart, were quick to levy the worst of all possible emotions onto them. I imagine if those same white celebs had been dancing, or smiling, the reaction would have been, “How dare those white people not take this performance seriously!”

Therein lies the reality of what the looks on those faces more than likely were, a seriousness that was the appropriate response to the serious performance being witnessed.

Kendrick’s fans, who so quickly labeled the looks on those faces as anger, failed to consider all the kinds of anger it could be. A class clown is often reminded that there’s a difference between someone laughing at you, and someone laughing with you. Well, there’s a difference between someone being angry at you, and someone being angry alongside you.

It’s not all that difficult to imagine the Grammy audience, which hasn’t had nearly as much exposure to hip-hop as Kendrick’s fans, having the ideas Kendrick was rapping about spark some realizations in their heads, and the seriousness, or anger, they then displayed was an anger they felt alongside him.

Could there be any greater honor for Kendrick than knowing he sparked that kind of emotion, and thought process, in a person? On the night of the Grammys, his own fan base took that potential honor away from him, because it was more fun to snarkily label everyone a racist.

Think about why artists like James Brown, and groups like Public Enemy, and N.W.A., are legends. It wasn’t just their words, it’s that their words made an impact on America at large, and sparked national conversation, and social change. Kendrick might very well have the ability to follow in their footsteps, but if every time a person outside of hip-hop takes a performance of his seriously, and the reaction from Kendrick’s fan base is to bash that person, it won’t be long before the people who could learn the most from Kendrick’s words give up on listening to him entirely.

So the next time you see someone looking serious, or even angry, while viewing a Kendrick Lamar performance, realize there’s a very good chance that person is being serious because they feel the performance should be taken seriously, and they’re angry because a realization has been sparked inside them. Rather than ripping that person, why not turn to them and ask, “Do you want to talk about what we just saw?” It could inspire an important discussion, instead of cutting it off before it has the chance to exist. It would also allow Kendrick to reach a level of greatness I would hope his fans would like him to achieve.