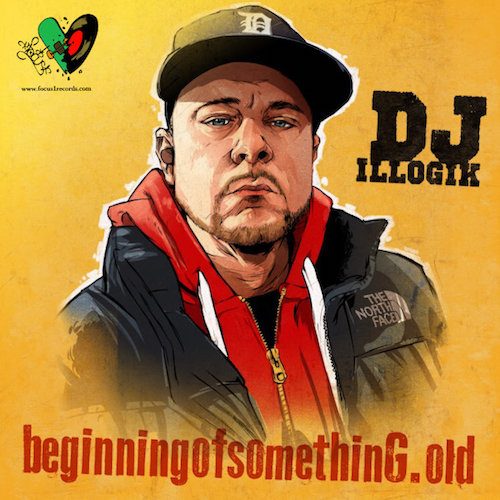 You know what’s really interesting about Midwestern America’s brand of hip-hop? The fact that most of that region’s artists have styles that are often amalgamations of styles from neighboring regions. When Common first came out, I thought he was an East Coast rapper given his penchant for wordplay-heavy lyrics and sampled beats that carried a New York influence. Producers like J. Dilla and Kanye West, though they certainly developed their own respective panaches, have influences from both the East and the South with their penchant for flipping challenging samples and transforming them into audio soul food. Yes the Midwest is not only influenced by its neighbors, but also by acclaimed eras in hip-hop. Enter Detroit’s DJ Illogik, whose third album, “beginningofsomethinG.old”, is both a love-letter to hip-hop’s highly exalted golden era and a jumbo jet that flies directly in the face of the present era’s lust-affair with trap sounds and nonsensical lyrics.

Produced mostly by FlexVocal with cuts from Illogik himself, the music is most certainly of the boom-bap persuasion. Some listeners may cringe at boom-bap’s sound, thinking of it as a bygone era in rap that should have had the final nail hammered into its coffin decades ago. But here, as the tongue-in-cheek album title indicates, Illogik managed to take an old concept and transmute it into something that is sonically auric.

He enlisted underground hip-hop artists from all over for this album, from known subterranean spitters like fellow Detroit native Guilty Simpson to the Maryland-based Open Optiks (of which Illogik is also a member). The aforementioned regional influence applies to the DMV rappers included here, as well. Sean Armstrong on “That Was Good” and the Maurice Daniel-helmed “Let That Thing Go” both have voices and flows eerily reminiscent of Jadakiss and Jay-Z, respectively.

Ozay Moore, a Lansing by way of Seattle transplant, was the earliest surprise. Admittedly, my knowledge of Christian emcees is pretty scarce, but this man rocked the mic over a sample-heavy production with high praises and unexpected wordplay on “RCK STDY”:

“A boss callin’ the shots is harder than you thought
If your department ain’t on top, it ain’t worth it to front
Soldier for the Gospel, renegade of funk
Like shaving with a razor, how I generate the bump”

The production and lyrics then take a dark turn with “Wits End” featuring Open Optiks and J. Scienide. With dusty drums, a scratched-in Eminem sample for the hook, and surreal samples, both Ak iLL and J. Scienide vent their frustrations with the world around them:

“Graphic Art” featuring Illtone has a similarly dark beat, but the production later segues into the smooth and atmospheric with the Isaac Leo-produced “Paradise Lost” featuring Ak iLL. Jamil Honesty provides the first storytelling narrative on “The Heist”, complete with horns and ’70s drum breaks. “Shots” didn’t do much for me, with Rochester, NY’s Hassaan Mackey having too monotone a flow for me to get into. The second half of the album contains two tracks that immediately stood out for me as testament to the album’s dichotomous title. “Waiting for Something Random” and its remix produced by North Carolina’s L’Orange.

Maurice Daniel produced the original with a jazzy feel to it, and emcees on it along with Pontiac’s One Be Lo, who outshined the former with an impressive double-time flow. The L’Orange remix has horns and more city feel to it. But both go in line with the album’s title because they’re actual remixes, with the same lyrics over different beats and not different songs altogether with the word “remix” or the term “(Part II)” thrown on the title when neither are actually applicable. “Pages (FlexVocal Mix)” features Guilty Simpson himself over a lush production:

What DJ Illogik did with this project is consolidate different emcees and producers from all across the country into a collaborative whole, drawing on their mutual love for hip-hop from a time when it was genuinely at its purest. Though some of the artists here have a stronger presence than the others, the collective effort is no doubt evident. Thematically, it’s similar to Daft Punk’s 2013 mega-album “Random Access Memories”: A veneration for the past with full-awareness of the present and a future sound that’s worth its weight in gold.