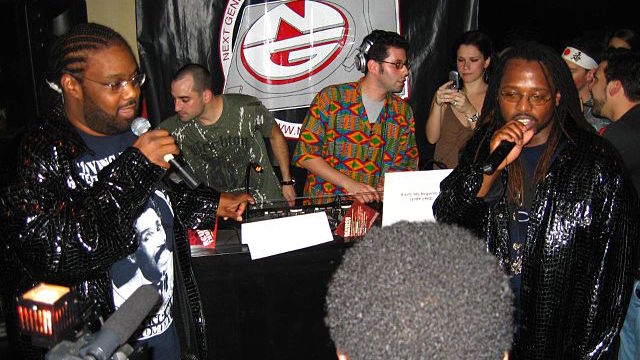 Rest In Peace to Prince Be of P.M. Dawn

There was a time in my life, chiefly in my impressionable teenage years, when I believed hip-hop music and culture was on attack from all sides – even from within itself. I was so adamant about this philosophy that I even thought hip-hop needed a “Committee Of Rap Excellence” to help protect it from the threat of being subverted by pop culture and those who would water down its cultural essence. This was some highly pretentious s–t that only a kid infatuated with all things hip-hop would come up with, but it did lead to me meeting some like-minded heads and starting a hip-hop newsletter, so flowers still bloomed from the fertilizer I was dropping. I wouldn’t still be here writing about hip-hop and rap a day after my 42nd birthday if it wasn’t for those heady times where I was trying to do everything a kid from the banal white heartland of America could to help – no matter how misguided that help might have been.

I was so adamant about this protection of hip-hop that I even believed “by any means necessary” was justified in keeping hip-hop out of the control of those who would subvert the music, the message, and the expression of the elements. I honestly would have even excluded MYSELF for the betterment of hip-hop. I didn’t operate under the naivete that I was anything other than the “cracker” or “cave dwelling devil” being discussed in the songs I listened to, and I didn’t use that old familiar line of rationalization that it didn’t apply to me. Ice Cube (paraphrased) once said of women that “If you’re not a bitch we’re not talking about you.” I knew my role and to play my part, so when others stood up to defend hip-hop, I cheered from the sidelines and encourage the call to action. Therefore when KRS-One tossed Prince Be and Doc.G (collectively P.M. Dawn) off a stage I cheered like I was supposed to. “That’s right. Toss those Spandau Ballet hippies the f–k out of rap. How dare they disrespect the t’cha and the culture! Get ’em OUTTA HERE!”

Time and perspective not to mention Patrick Taylor’s review last year have softened my respective a bit – I’m not as HardC.O.R.E. as I used to be. Sure some of that Prince Be (real name Attrell Cordes) said to Details magazine could be interpreted as disrespectful to KRS, but it’s also easy to see how an over-eager journalist hungry for the spotlight could have taken what he said out of context and only left the most provocative bits in. In hindsight it’s not even that bad at all. Cordes said “KRS-One wants to be a teacher, but a teacher of what?” His response was “I’m a teacher of respect” and I cheered for that, but if his response had been verbal and not physical I would have cheered too. Imagine if instead KRS had said “I’m a teacher of the elements of hip-hop. I’m a teacher of hip-hop’s history, and that’s coming from 1520 Sedgwick Avenue to where we stand today. And to P.M. Dawn, I’m a teacher that to be part of hip-hop’s future, you must also respect its past.”

Today we mourn the passing of Attrell “Prince Be” Cordes on June 18, 2016 from kidney renal failure and complications related to diabetes. There’s another lesson that can be taught here, not by KRS-One nor by Prince Be, but simply by the fact that we also lose hip-hop artists at a relatively young age in more ways than just systematic gun related violence. Rappers being shot down in their prime is an easy concept to grasp, and KRS-One himself called for the community to “Stop the Violence” in the wake of Scott LaRock’s death, but we also do violence to OURSELVES by not taking care of our bodies. Buffy, Big Pun, Big Moe and Heavy D all died of heart related ailments. It’s easy to take for granted that not being shot makes it another great day to be alive but we all need to think about more than that. I know that isn’t easy when life seems too short as it is, but who wants to be dead in their 40’s or in a wheelchair in their 50’s when it comes NOT from a bullet but from high cholesterol and diabetes?

As human beings we can all be our own worst enemies with our failure to eat right and exercise as often as we should. Prince Be’s condition may have been hereditary and to some degree unavoidable, but you can always fight back instead of simply surrendering to fate. I don’t know enough about his health to say for certain what his challenges were, but I am sad he’s not here to talk about them today. I’m also sad that I once cheered for this man to be physically assaulted simply for asking a question that I felt was unnecessary and disrespectful. I can now say in fairness we should all ask what we teach each other about what hip-hop is, what it should be, and what it could be. It is such a powerful force that we ought not take the ongoing hip-hop movement for granted, even 40 years removed from Kool DJ Herc getting the ball rolling. And let it be said that I’m no saint when it comes to my own health. I don’t eat right all of the time, and I don’t exercise as much as I should, but I go to the gym 2-3 times a week now. I’m trying to get better and be better, and if hip-hop gave one naive kid from Iowa anything in his teenage years, it gave him hope that things could always change for the better so long as someone was willing to stand up and speak the truth.