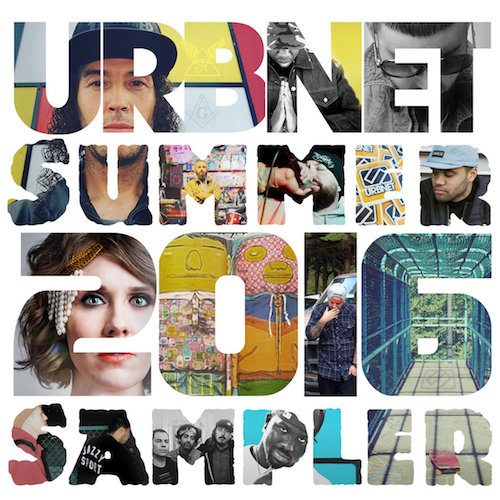 As much as I appreciate the service level of URBNET Records not to mention their relentless hustle – making them seem more like a major label than some actual “majors” that I know – I have to declare a moratorium for a few weeks after this review. Unless somebody else on staff picks up where I left off we can’t just have one writer covering one label every time they drop a new project. Besides the tendency for bias to creep in that should be avoided at all costs, it’s just monotonous for both the writer and reader, and for all of those reasons I think a break from covering URBNET for a bit is best.

To go out with a bang though I’m taking a look at their “Summer 2016 Sampler,” which given what I’ve already said about over-covering their label has a lot of very familiar material. Some of it actually dates back to last year like the Statik Selektah produced “Pop Off” by Bless but if you were going to make a variety platter and pile your best flavors on it, you’d include this cut given that it aged well. I’d have said the same in 2017 for “Friendly Vibrations” by BudaMunk & ill Sugi if they held it for a latter comp, but it’s definitely the definition of dope to showcase what these producers can do.

Some cuts aren’t quite as choice though. I may like Elaquent’s “Grimey & New” more than when I first reviewed the “Less Is More” album but I still think it’s a lesser track compared to better instrumentals from that album. I haven’t warmed up at all to Fortunato’s vocal stylings since I last heard his “Blue Collar” EP, but Sean One is a very capable producer and the guest stars on “Closer Look” (Murkules and Tachichi) balance out the track and make it a worthwhile selection. It may be addition by subtraction to say these “misses” are now “hits” but they actually benefit from being showcased outside their albums.

There are some parts of this compilation that leave me confused though. I realize that URBNET has their fingers in a lot of pies and can’t concentrate strictly on hip-hop music, but Geneva’s “When to Leave” feels like it still wants some swagger even though the minimalist beat better suits a Lorde or Adele. If you’re listening sequentially it seems even more disjointed when immediately followed by LMNO’s “Deadication.” It’s a dope track from “Motherboard” but the two songs have as little to do with each other as is humanly possible, and even by LMNO’s standards it was (purposefully) just a little bit out there and trippy.

In the truest definition of “sampler” then the “URBNET Summer Sampler 2016” is taking a little bit from everything URBNET has done over the last 6-8 months. It’s the great, the good, and the merely average all cobbled together in equal measure. You can’t go wrong with the throwback hip-hop stylings of Moka Only on “My Way” or the goth-hop swing of Swamp Thing on “Dark City,” but you may not have much call to play Brevner’s ” Chico” or Evil Ebenezer’s “Paralyzed” twice — I don’t. I guess that not as much bias creeped in as I was worried about.