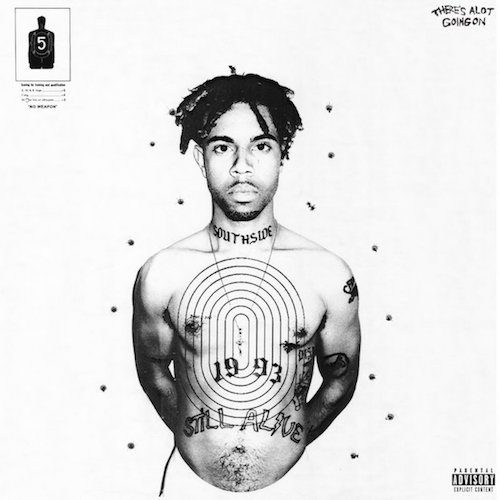 There’s a false binary in hip-hop where rappers are either supposed to be conscious or street, make protest rap or rap about women and money and liquor. Chicago rapper Vic Mensa shows just how false that binary is on his major label debut “There’s Alot Going On.” Over seven songs, he addresses serious issues like police brutality, mental illness, and the Flint, Michigan water crisis, as well as less serious issues like getting drunk in the club and chasing after pretty women. By doing so, he manages to make his own lane in hip-hop.

Mensa has been rapping since 2012, but he first came on the scene in 2013 mixtape “Innanetape,” as well as performances with the Gorillaz, J. Cole, and Wale. He also contributed bars to Chance the Rapper’s “Acid Rap,” which is where I first heard of him. While Chance went in a more indie and gospel direction, first with his collaboration with Donnie Surf and the Social Experiment, and then with his latest album “Coloring Book,” Mensa has stayed closer to mainstream hip-hop. Producer Papi Beatz keeps the snares snapping and hi-hats rolling throughout the album, and Mensa does his share of Auto-Tuned singing, which is a requirement for any rapper trying to break the Hot 100. What sets Mensa apart from his peers is that he hasn’t diluted his message even as he’s signed to Roc Nation.

There’s a trend in hip-hop towards minimalist, almost gibberish rhymes, and Mensa completely ignores it. Instead, he crams as many syllables as possible into his bars, sometimes not even bothering to rhyme. He starts off with “Dynasty,” giving some exposition-heavy bars to set the scene:

“The crazy man’s keeping me up, I’m not sleeping
My fit too fresh to be doing the housekeeping
The maids cost too much, started cleaning my own closet
Living childhood fantasies, dealing with grown problems
Got a brand new bae, she keep me G.O.O.D like the music
If the Roc is here, throw up your diamonds and hood cubics
No I.D. said it’s time to take these goofy ni***s out rap
Drop bombs over Baghdad on these SoundCloud outcasts
I stray away to say the way my days would be without rap
My mind drifts to back before the Chi was labelled Chiraq
Then Chief Keef dropped in 2012, now it’s a drill
I was waiting in the wing like a bird on a windowsill
Now I’m the fresh prince, I think I know how my uncle feel”

Then he goes into “16 Shots,” which addresses the 2014 murder of Laquan McDonald by a Chicago Police officer. The song calls out the mayor and the police force for how they bungled the case and tried to cover it up, but it also promises retaliation, in no uncertain terms. “This ain’t conscious rap, this shit’s ignorant,” he raps. “Ain’t no fun when the rabbit got the gun/When I cock back, police better run.” The song ends with the McDonald family’s lawyer reading a description of how the 17-year-old died that October night. It’s a harrowing description, and a harrowing song that is full of unrestrained anger.

From there, Mensa goes in a more radio-friendly direction. “Danger” is a banger with an Auto-Tuned chorus of “You know me, I like the danger.” “New Bae” is a melodic song about sex, followed by “Liquor Locker,” a guitar-led R&B ballad. Lest you think Mensa is going soft or selling out, he drops some real truth on “Shades of Blue,” rapping about the Flint Michigan water crisis:

“Now you’ve got toddlers drinking toxic waste
While the people responsible still ain’t caught no case
I don’t get it man, I just ain’t wit it man
They got Damn Daniel distracting you on Instagram
Back again with the all-white media coverage
They do it over and over like remedial subjects
The people with the least always gotta pay the most
We the first to go when they deleting them budgets
Can a n***a get his basic human rights?
Is that too much to ask? Should I say it more polite?
And everybody broke so we in the same boat
But would they let that bitch sink if we was white?”

The EP ends with the somewhat rambling title track, which is basically Mensa listing all the crazy ish he’s been up to these past three years. It’s interesting that a rapper who just spent several songs celebrating partying and living dangerously would close with a song that soberly lays out the trouble he’s gotten in through partying and living dangerously. He gives it warts and all, with self-awareness. He even raps about assaulting a woman who attacked him when he was high. He not only admits that he was in the wrong, he also understands how the breakup of his group and his drug use played into it. It’s a long way from Eazy-E or Biggie bragging about beating women up in their rhymes.

“She came out the room swinging, hit me in the jaw
I was really trying to fend her off
But I ended up in the closet with my hands around her neck
I was tripping, dawg
Too proud to apologize or empathize, I blamed it all on her
Saying that she hit me first, even though she was the one hurt
I was really just reflecting all the hurt that I was feeling from the band’s rejection
When Kids These Days split, that shit felt like a c-section
And my infidelity and jealousy with Natalie on top of the amphetamines
And the ecstasy had me trying drown face down in the Chesapeake”

Mensa’s honest lyrics and skills on the mic work well with his club-ready beats. He manages to represent the different facets of his life and his experience and makes it sounds convincing and not calculating. Just when you think he’s being too ignorant or hedonistic, he’ll drop some serious knowledge, and just when you think he’s being too personal, he’ll drop some bars about sex and drinking. None of us are just one thing, or an either/or proposition, and Mensa represents this complexity to the fullest. To paraphrase Walt Whitman, Vic Mensa is large and contains multitudes. He’s also released one of this year’s better EPs.