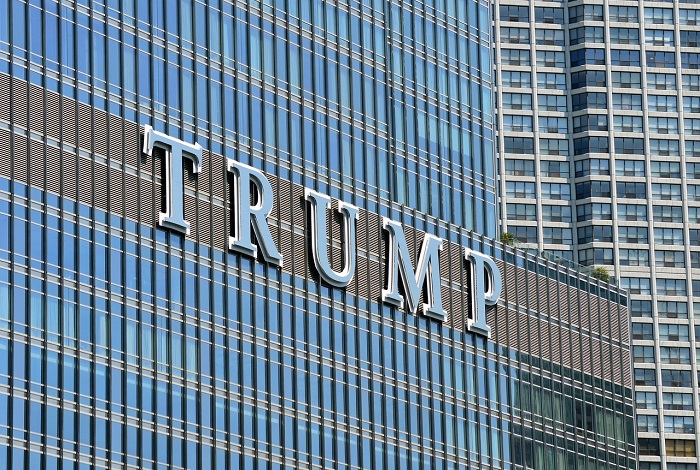 The brand that is Donald Trump has long radiated beyond the United States as a particularly flamboyant embodiment of American capitalism. They love that guy all the way in China, because if there’s one way to be in the right, it’s to be a “successful” “businessman.” And you get that wrapped in the package of a showman? Who could not be sold on such a figure? Trump has been who he is for so long that he actually comes across like a relic from ’80s New York, which doesn’t seem to bother the people who think it would be a good idea to make him the next American president. Regardless of who will hold the office after November 8th, the irony shouldn’t be lost on the hip-hop world that while eight years weren’t enough to fully warm up to Barack Obama, one of his potential successors has long been acknowledged by American rappers as a symbol for their own aspirations.

“Guess who’s the black Trump?” the Wu-Tang Clan’s Raekwon asked rhetorically on 1995’s classic come-up charter “Incarcerated Scarfaces.” And while he didn’t fail to remind black and white Trumps of the dog-eat-dog world they made themselves comfortable in with the warning “You rollin’ like Trump? You get your meat lumped” in the same song, the coinage became a tune of its own when Boot Campers Tek and Steele recruited Rae for the Cocoa Brovaz “Black Trump” single in 1998.

The Donald’s ventures suffering some substantial setbacks in the early 1990s didn’t prevent rappers from including him in their extended fellowship as they all imagined themselves in an executive chair of their own. If rappers knew one entrepreneur by name, it was Donald Trump. Instead of collecting chump change, E-40 was spending “Trump Change” (1998) and fellow Californian Rappin’ 4-Tay trumped Raekwon by declaring himself nothing less than the “New Trump” (1996). Texas rap crew 4 Deep cited his business acumen when relaying their illegal activities on “Another Day in the Jungle” (1993). Sympathy he would also receive for his marital troubles with wife Ivana from hardcore hip-hop avantgardists Ultramagnetic MC’s in the intro to “Dolly and the Rat Trap” (1992). (A sentiment later countered by Rah Digga with “Get loot like that Trump bitch Ivana”). Even Five Percenter King Sun boasted, “I’m livin’ large as if my last name was Trump” on “Once Upon a Time” (1994). And producer Pete Rock, typically not overly concerned with material conquests, was “in hot pursuit of Donald Trump rap loot” on his hip-hop heavyweight round “Tru Master” (1998).

It was also in 1998 when the real Donald Trump left a phone message on Method Man’s album “Tical 2000: Judgement Day,” certainly a point of culmination for late ’90s rap megalomania. Another rap act actually staged an appearance by Donald Trump as early as 1994, but for a higher purpose. On “Pimps (Free Stylin at the Fortune 500 Club)” Bay Area leftists The Coup let established magnates Rockefeller and Getty detail their schemes in rap form. Once they’re done, they don’t fail the draw a line between them and upstart Trump, who’s desperate to join their cipher.

By 1999 rap’s poet laureate Nas illustrated the increasing importance of the digital world when he declared on “New World”: “The new Don Trump is Bill Gates / Not because [of] his occupation, it’s cause we respect his cake,” also hinting at the main cause of the fascination with Trump types. A year later, in his breakout smash “Country Grammar,” St. Louis’ Nelly approached both men simultaneously in hopes to join their exclusive club, pleading, “Bill Gates, Donald Trump, let me in now!”

In the real estate tycoon’s case there would have certainly been many doors to knock at. During his early years he would have been found in the same New York borough that would soon bring forth a storied lineage of rap icons like Run-D.M.C., L.L. Cool J, A Tribe Called Quest, Nas, Mobb Deep or 50 Cent. ‘But the Jamaica Estates of Mr. Trump’s boyhood was an exclusive and nearly all-white place, resistant to outsiders and largely impenetrable to minorities,’ writes the New York Times, suggesting that the son of real estate developer Fred Trump (who helped shape the landscape of affordable housing in Brooklyn and Queens during the ’60s and ’70s), grew up in a sheltered environment. After ascending in his father’s company and gaining tabloid fame, Donald Trump definitely became the fat cat who couldn’t just walk any streets. Los Angeles rapper King Tee used him as an antipode when in the aftermath of the social unrest that befell his city in 1992, he rhymed on “Black Togetha Again” (1993):

“I’ll be damned if I get paid at a minimum wage
while they afford to eat like a smorgasbord feast
and leave us here down in the dumps
The place where Donald Trump would get his ass jumped
Slavin’ at Mickey D’s for 4 bucks and a quarter
and can’t afford a Big Mac with a soda
The biggest crooks, the biggest thugs there ever was
was the ones that they vote for, and hope for”

Perhaps this summary marks the point in this editorial where clouds appear over the uncomplicated bromance between rap music and Donald Trump. Nevertheless the reverence continued after the year 2000 with name-drops by Chingy, Jeezy, Diddy, Kanye West and Pharrell. Jeezy additionally teamed up with rap music mogul Birdman for the simply named “Trump” (2011), while fellow ATLiens Rae Sremmurd were “Up Like Trump” just last year.

Perhaps “Donald Trump” (2011) by Mac Miller with its over 100 million YouTube views helps put rap’s fascination with Trump into the proper perspective. The white rapper’s song is a travesty of the traditional rap narrative (of which Trump and similar references are part) as he’s under the assumption that he has the right to adopt the rags-to-riches rhetoric word for word just because he happens to rap, and that it can actually work with a very poorly executed song. In the spirit of Raekwon’s “black Trump,” Donald Trump typically serves as a colorful contrast to the reality of black America. When Jay-Z declares himself “the ghetto’s answer to Trump” and Jeezy as “Donald Trump in a white tee and white 1’s,” then that’s a manifestation of hope. Rappers “wanna be like Donald Trump” (Jayo Felony) precisely because it seems unrealistic. Like Rockefeller for Roc-A-Fella, Trump symbolizes the desire to make it the way white Americans make it, to get the same chances, to receive the same respect.

At the same time Trump is every bit the narcissistic loudmouth loose cannon as many rappers these days. Which was harmless as long as his antics didn’t affect too many people. Now that he’s secured the Republican nomination, we realistically have to consider a President Donald J. Trump, which understandably is a bit of a nightmare for some. The Republican primary campaign set a new low point for American politics, and even if there may have been worse candidates, Trump was still the most bizarre one. It shouldn’t come as a surprise that rap music is in the process of reconsidering its relationship with this man. Rick Ross was his usual confusing self when he pondered to “assassinate Trump like I’m Zimmerman” on “Free Enterprise” (2015), but YG has a much more thoroughly argued opinion of Donald Trump. It boils down to the sensationalist title “Fuck Donald Trump” (2016), but the Nipsey Hussle-assisted single is rap’s overdue official response to this candidacy: “Me and all my peoples, we always thought you was straight. Influential muhfucka when it came to the bidness. But now, since we know how you really feel, here’s how we feel…”