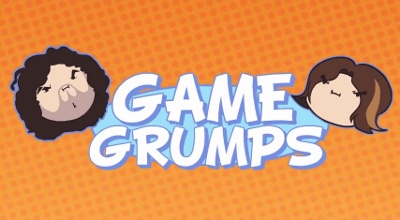 10 Videos From Game Grumps Animated (I’m NOT SO GRUUUUMP!)

Over the past two years, I’ve become an unapologetic fan of the Game Grumps channel on YouTube. It’s hard to imagine a day that goes by where I don’t watch one of their videos, even if it’s late at night after a long day of work is finally done. Even though the majority of that viewing is attributable to Leigh Daniel Avidan a/k/a “Danny Sexbang” and Arin “Egoraptor” Hanson and the comedic rapport that exists between them while playing video games, I’ve also come to enjoy the shows that spun off from the success of the Grumps – particularly Steam Train episodes with Barry and Ross. I’ve discovered a lot of other YouTube gaming personalities because of the Grumps as well – Jirard the Completionist, Commander Holly, Mortem3r, and so on. As a life long gamer their content is something I greatly appreciate.

Another thing I appreciate about the Grumps is the large and devoted fan base they’ve accumulated thanks to the humor and entertainment they offer us in daily 10-15 minute doses. Many of them are talented enough artists in their own right to produce animated versions of the Grumps using vocals from the videos of them playing video games, often creating surreal and outlandish parodies of the Grumps and video games in the process. Some are just fantastic voyages through a world of fantasy that doesn’t even have anything to do with the game they played, and some are just insanely funny clips that have me laughing until I feel like I’m going to cough up a lung.

Even though I normally feature hip-hop videos in this space, I wanted to share a little of my appreciation for the Grumps in general and their fans in particular, the talented animators who slave away for hundreds if not thousands of hours just to bring a minute or two of funny dialogue from these shows to life in cartoon form. It’s a lot of work, more than anybody should even want to do, but damn it just like the Grumps they make our lives better for it. I think it’s also an uniquely cool aspect of what the Grumps do that they actually commission some of these artists to animate their adventures – which isn’t that surprising given Egoraptor himself has a background as an animator and knows just how much work it is to produce animation. I don’t know the specific details about how they select artists or what those artists make, I just think it’s hella cool that even happens at all – the Grumps using their popularity to give back to the community. They do that in other ways as well such as charity drives during Twitch livestreams, so it’s kind of their thing in general, but I’m getting sidetracked on this topic. Here are ten of my favorite animated Game Grumps clips!