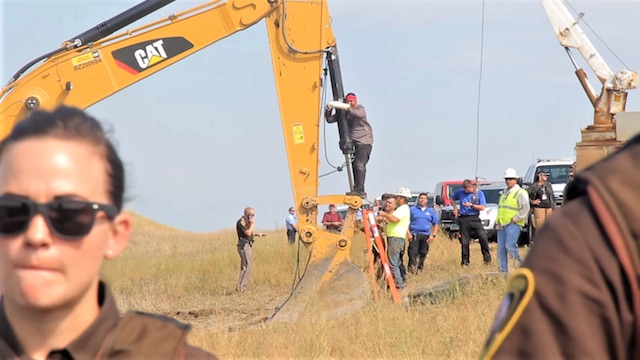 To begin this editorial I’d like to explain the picture which will be embedded in various places when this article is shared. What you’re seeing is a man named “Happy” American Horse from the Sicangu Nation expressing his solidarity with the Standing Rock Sioux Tribe, locking himself to construction equipment in a form of non-violent protest of what’s commonly known as the Dakota Access Pipeline. While concern about this nearly 1,200 mile pipeline dates back to the project being announced in June of 2014, the specific actions of Standing Rock Sioux Tribe in objecting to this pipeline date to April of last year, attracting a groundswell of environmental protestors, activists and even Hollywood celebrities to support their cause. I’m sharing a video which outlines the pipeline’s history if you’re new to this issue.

The possibility exists as of today (January 3rd, 2017) anything I have to say about the issue will be swept aside in 17 days by the administration of a new President elected by a minority of the voters for the fifth time in U.S. history. That may or may not be an editorial for another day as I feel I’ve already exhausted the topic and have to live with the inevitable (and likely ugly) four years to come. Before that inaugural ceremony takes place though I’d like to give my brief thoughts on whether or not I side with the #YesDAPL or #NoDAPL position on the pipeline, and given I’m neither conservative nor liberal, not Republican nor Democrat, this isn’t as clear cut as you might have thought going on. I will give a definitive conclusion and take a stand one way or the other at the end though – I guarantee it.

First let me state what I’m sure will be an unpopular position with the majority of protestors – I believe that the future of the United States lies in energy independence and we may need to make some unpleasant choices to get there. I’d love it if 100% of our energy needs could be addressed through green means such as wind power, solar power, harnessing geothermal energy, and so on. The short term problem is that achieving energy independence by those means alone is almost guaranteed to fall short of the growing energy demands of a growing nation with a growing dependence on technology. Are we all prepared to trade in our cars for bicycles, turn off our air conditioning in the summer and our heat in the winter, and grow our own vegetables? I didn’t think so. We have to be absolutely realistic that 300 million people are not going to change their lifestyle to make green energy a sustainable solution, and unless we want to be dependent on energy exports from other countries who may or may not be friendly toward the United States, we need to continually develop the resources we have here at home.

Green energy resources can offset some of our energy needs, but they can’t fully replace it and probably never will. And yes I’ve heard and read the argument that you could build an array of solar power panels in various unoccupied places in the world and meet 100% of the demand right now, but could it do so tomorrow and the next day, and for how long would it keep up? How long would those lands be fully unoccupied as the Earth’s population increases? And who would have the money and the will power to both build and maintain those solar arrays? Proposing simple solutions invariably ignores that there are complex problems in implementation and utilization long term – I’m not willing to be that naive. In fact I’d sooner accept nuclear power as a solution, and THAT is an unpopular idea, but if you’re looking for a “clean” means of producing energy it’s actually better than most ways we produce electricity today. Try telling that to people who are scared s–tless of nuclear technology though. When people need power and there’s not enough available for a half billion or more people in this country perhaps they’ll reconsider.

We’re getting away from the key issue though, which is a pipeline that carries oil from North Dakota to Illinois for processing, and while that is an energy need to address it doesn’t directly convert to electric power which is generally what I was talking about in the paragraph above. Oil production will account for 90% of automobile needs (when processed into gasoline) and 40% of our total energy needs, but 1% of less of the electricity we produce. Shutting down the Dakota Pipeline would have no appreciable effect on the quality of your life or mine short term. In fact while you might argue that not tapping into the abundant resources of the Bakken oil fields might hurt our energy independence AND raise the cost of a tank of gas, the reality of filling up at the pump is completely independent from how much oil the U.S. can produce. Since it’s a global commodity, bought and sold on a global market, the price of a barrel of crude has more to do with how much China needs and/or how much Saudi Arabia and its neighbors can produce. In other words external factors that no one in this country has any control over make the price of gasoline completely out of your control, and you can thank an oil consortium from the Middle East that was unwilling to cut production despite a Chinese recession driving down their energy demands for the relatively cheap price of gas you pay right now compared to a few years ago. We can’t produce enough oil to make a dent in the price of any appreciable amount and we never will.

So if the Dakota Pipeline isn’t enough to make a dent in our energy needs, or lower the cost you pay for them on a personal basis, what the protest comes down to is the trade off between doing something that’s only marginally beneficial to our independence as a nation compared to the harm it could do to an EQUALLY sovereign nation. I need to make that last point clear – “equal” – because even though the Standing Rock Sioux Tribe may be wholly surrounded by the United States, tribal sovereignty guarantees indigenous/native people and the lands the occupy the right to self-governance which can be completely unique as compared to state law, but still run in parallel with federal law. You’re probably already familiar with this in practice due to reservations in states that prohibit gambling establishing casinos as a tourist draw, reaping the financial benefits that come along with it, but “parallel” implies that they can act independent of the states they’re in while not overriding the COUNTRY they are in. Sovereign tribes do not print currency that supersedes the U.S. dollar and do not represent the country in negotiations with foreign powers. It’s incredibly complicated and I don’t want to oversimplify the relationship but just take it to mean that native rights are as insoluble as U.S. citizen rights – separate and equal yet not wholly transferable.

As such it’s hard for me to not be sympathetic to the Standing Rock Sioux, nor to any sovereign native tribe, especially in light of the long and often entirely negative relationship indigenous/native people have with the people who colonized this country. Need I say more than “Trail of Tears” to cover this issue? I think not. Hundreds and hundreds of years of injustice have been heaped on people who deserved none of it, and if they feel this pipeline could potentially affect their drinking water if there’s an oil spill (a real foreseeable possibility – pipelines do regularly fail) or that it tramples on sacred lands that have a deep abiding spiritual connection to those who live there, it’s hard to justify shoving one more injustice down their throats in the name of producing more carbon spewing fossil fuels. Even if global warming was a myth (which clearly it’s not but we have four years of climate change denial to look forward to) and gasoline wouldn’t hurt a thing, the one thing that no one deserves is to have their home or their drinking water polluted.

Bottom line – if you care about Flint, Michigan you should care about the Standing Sioux too. I’m not convinced there’s any safe way for this pipeline to cross the Missouri that doesn’t potentially put them in harm’s way, and while I’m not going to pitch a tent in the cold or chain myself to construction equipment, I believe in their right to protest and address their legitimate and historical distrust of anyone who says “this can only benefit you in the long run and won’t hurt you at all.” There’s too much precedent for anybody of indigenous heritage to put blind trust in the fair dealings of state or federal government. That trust has been violated far too many times, and far too many treaties have been broken, so in this case I can’t blame the Standing Sioux for drawing a line in the sand. If in the future the tribe decides it is in their interest to allow a pipeline in or around their territory, that’s their choice, not mine. Until they agree to it I’ll be in the #NoDAPL camp out of respect for their wishes and concerns, no matter what our current President-elect and future President may think.