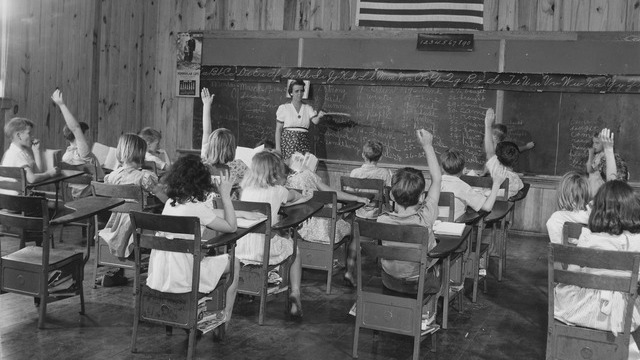 98% of U.S. Citizens Are Immigrants

If the old saying “a picture is worth a thousand words” has any merit, I think this one will suffice. You might think this was any classroom in any school anywhere in the United States in the 20th century. In a sense you’d be right. There’s a specific detail that’s not evident in this photo though – everyone in the classroom is the child of an immigrant farm worker. This is generally not what people who are opposed to immigration think of, and to be frank about it, that’s because a lot of them assume “immigrant” = “not white.” I’m not saying everyone opposed to immigration is a racist, but I am saying most of them are hypocrites, because 98% of us are not native to the United States anyway.

You might think of yourself as an “American.” You might think that your children, your neighbors or your friends are “American” too. The overwhelming odds are that your ancestors did not. You may be more than a few generations removed from when they emigrated to the United States, but if you go far enough back in your genealogical tree, you’ll find a direct ancestor who wasn’t born here. It doesn’t really matter which continent they came from – Europe, Asia, Africa, South America, or even Australia (which is another overwhelmingly immigrant country). Unless you have Native American/indigenous or hispanic ancestry, you’re not from here.

Let’s be clear – not everybody came here by choice. Many people came here in shackles thanks to the evils of slavery. That ignominious part of this nation’s history is never going away no matter how much we all try to sweep it under the rug. People also came here under false promises and outright lies. Chinese laborers took job offers hoping to provide for themselves and their families and often found themselves in conditions scantly different from slavery. And make no mistake about it, many people came to the United States because they had no other choice. They faced persecution back in their native country because of their ethnicity, or their religious beliefs, or for daring to speak out against an oppressive regime. The founding fathers knew a little something about that too. They and their ancestors came here because of persecution back home, and then found the tyranny of a foreign king they had left behind too much to bear, which is the whole reason this country called the United States even exists. We are in fact quite literally “a nation of immigrants” whether by choice or by force.

The whole reason the Bill of Rights exists and is considered the highest law of the land as Constitutional Law is because a nation of immigrants of differing beliefs and values wanted to enshrine their right to practice those beliefs and values, allowing no elected official nor governing body to usurp those fundamental rights. I put forth to those of you who would have a “religious test” or a “Muslim nations ban” for immigrants that you are not only morally wrong, but fundamentally anti-American, for you are betraying the very values that your ancestors treasured. It is understandable to fear terrorism in troubled times, yet it is easy to forget the suspicion your own ancestors must have been viewed with when they came here (such as N.I.N.A.) too. If America truly is “great” then it’s “great” because of the tired, poor, huddled masses yearning to breathe free – and not because of walls or religious tests. Whether you like it or not, you’re an immigrant, the same as those you’d ban.