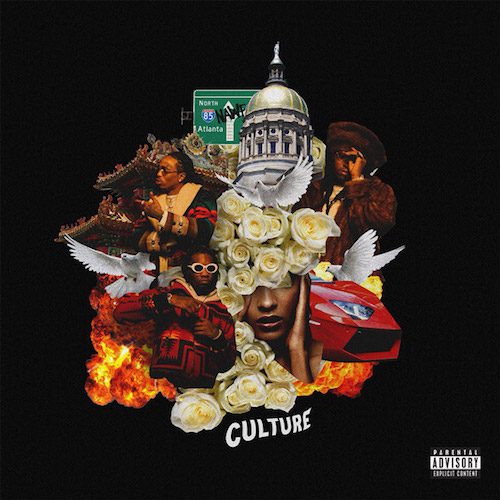 Since their formation in Georgia in the late 2000’s, Migos has steadily been on the rise in both the hip-hop landscape and increased pop culture appeal. The tipping point to Offset, Quavo and Takeoff going mainstream was undoubtedly the “Versace” single in 2013, a bumping Zaytoven produced track which got an unexpected endorsement from a Drake remix and Justin Bieber lip syncing to the track on Instagram. Since that time you just can’t escape Migos’ presence whether you’re a hardcore head, dabble part time, or just listen because your partner really likes the way they swang. The only thing that’s slowed them down from rocketing even higher into the atmosphere is their own legal troubles. Offset spent the majority of 2015 behind bars, but thankfully a clean sheet in 2016 gave the group time to work on “C U L T U R E” and drop the Metro Boomin/G Koop produced “Bad and Boujee” featuring Lil Uzi Vert. I like the mellow melody and the heavy bass hits but I have to admit the “remix” which turns the song into one long performance by Vert cracks me up every time.

All kidding aside Offset has developed into a charismatic storyteller who holds your attention when he keep the stories on wax rather than behind bars.

“Raindrops, drop tops (drop top)
Smokin on cookie in the hotbox (cookie)
F$%kin on your b–ch she a thot, thot, thot (thot)
Cookin up dope in the crockpot (pot)
We came from nothin to somethin nigga (hey)
I don’t trust nobody with the trigger (nobody)
Call up the gang, they come and get you (gang)
Cry me a river, give you a tissue (hey)
My b–ch is bad and boujee (bad)
Cookin up dope with an uzi (blaow)
My niggas is savage, ruthless (savage)
We got 30’s and 100 rounds too (grrah)”

Don’t confuse “charismatic” for “profound” though with any of the group’s members. “We came from nothin to somethin” is pretty much where it starts and ends, trading an illegal life of whipping up rock to a legal life of whipping up raps. The group stands out from their peers of similar topics in three ways. First the members all have distinct personalities. Quavo is the joker who “floats on the track like a Segway” and wants the ladies to “show me boobies” when he’s on stage. Takeoff has the deep voice and likes to modify his flow with a choppy delivery and little hints of AutoTune. Offset is the glue who holds them together – not as deep as Takeoff, not as much of a comedian as Quavo, just holding down his own lane with his laid back confident swag, occasionally busting into song as heard on the XL/Nard & B laced “T-Shirt.”

Secondly the production Migos’ enlists on “C U L T U R E” really puts them over the top. The aforementioned Zaytoven is still a factor on tracks like the piano laced “Big on Big” and the big bass bottom of “Brown Paper Bag,” but that’s only two cuts out of over 58 minutes. The other talent on deck handles their duties equally well. Cash Clay Beats and Deraj Global actually making vocal screams an effective part of the instrumental on “Kelly Price” featuring Travis Scott. Murda Beatz knocks around some glassy keys and interjects lilting wind instruments on “Get Right Witcha.” If you want something to absolutely pound the block with while you’re driving with the top down look no further than Cardo’s “Deadz” featuring 2 Chainz. Put simply the tracks on “C U L T U R E” bang like hell.

Tracks like “Deadz” also show their limitations though as 2 Chainz has never been known for his lyricism and nobody here does anything to outshine him, even though Takeoff tried like hell to win me over with a reference to a freakin’ Olympic gold medalist. When Offset rhymes “one in the chamber” with “Wilt Chamberlain” though I was like “nah nah nah nah” instead of Vert’s “yah yah yah yah.” That leads me to the third and most important thing about Migos though – I just ain’t mad at them for being young and having fun and neither are their fans. I know we live in serious times with a lot of very serious issues that need to be addressed, but life also has to be worth living and not just a non-stop relentless and depressing assault on your spirit. “Call Casting” is just about as gritty as it gets.

There’s nothing inherently harmful about the fun Migos is having and their sense of playfulness comes through in their videos. I’m not giving them a pass on being a little misogynistic, nor in the casual manner with which they seem to brush off drug selling as just another way to get by, but I’m not counting on them to change the world and you shouldn’t either.