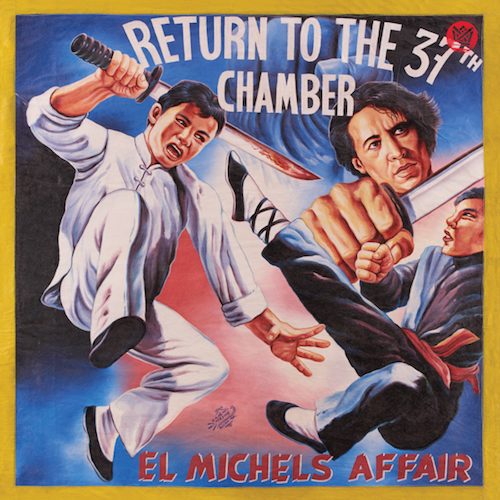 “Return to the 37th Chamber” is the follow up to El Michels Affair’s “Enter the 37th Chamber,” and is another (mostly) instrumental take on Wu-Tang songs done with a live band. It’s a little darker and more daring than “Enter,” which has its pros and cons.

Where “Enter the 37th Chamber” was mostly mellow, funky music you could put on as background music, “Return” is a little less smooth. There are definitely several tracks that are straight forward instrumentals (“Iron Man,” “Shadow Boxing,” bonus track “Iron Maiden,”). Most of the album, however, is darker and weirder. The album starts with the dark, dirty guitars of “4th Chamber,” and continues on that vein. “Shaolin Brew” tempers its 70s blackspoitation soundtrack vibe with crazy guitar squall. “Wu Tang Clan Ain’t Nuthing ta F’Wit” adds dissonant keys to the familiar organ refrain. It all feels a little creepy, like the songs of the Wu-Tang as experienced on a bad drug trip.

The “Michels” of the El Michels Affair is Leon Michels, a musican/songwriter/producer/label head whose resume made me feel lazy. In between being in several different bands and running a label, he’s produced albums by Aloe Blacc and Lana Del Rey and got a songwriting credit on Adele’s “19.” More recently, he’s stepped away from the Truth & Soul Label to start Big Crown, which moves away from Truth & Soul’s retro-soul sound. Several Big Crown artists and former Michels collaborators show up here, including The Shacks, Lady Wray, and Lee Fields. The Shack’s haunting voice on “Tearz” is one of the highlights of the album, as is Lady Wray’s vocal on “You’re All I Need.”

As much as I appreciate the adventurousness of this album, it ended up being too dark for my tastes. The source material is inherently limiting: they are songs based around seconds-long samples looped over and over again. I understand the urge to go more experimental, but at least to my ear the end result is an album that isn’t as easy or enjoyable to listen to as its predecessor. That said, it’s an interesting take on the Wu-Tang’s legacy, and worth checking out.