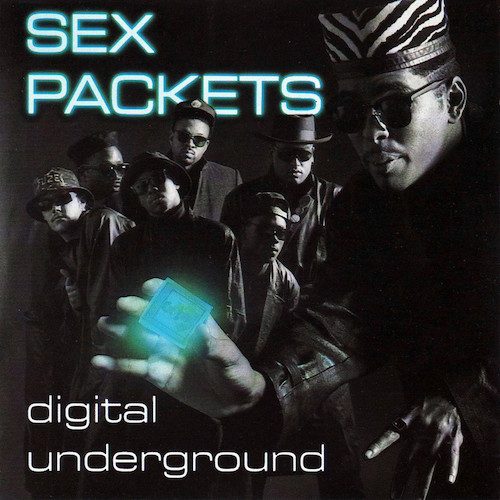 As a young teenage punk in the pre-internet (and even pre-web browser) era my friends and I could get into some pretty weird arguments. I had a subscription to The Source, one which perplexed me both then and now by coming with a mailing label that said ALL FOR IOWA, making me think I was the only one in the state reading the thing. Nevertheless I felt as though it made me “more informed” than my peers when it came to rap music and hip-hop culture. I’d try to elevate the discussion to a higher level about who had the better style, whether or not gangster rap was taking over, how the Bay Area was being overlooked because of the L.A. versus New York rivalry, and so on. That wasn’t what my peers wanted to discuss though.

Friend #1: “So I heard a rumor that Shock G and Humpty Hump are the same person. What’cha know about that?”

Friend #1: “They don’t sound the same though. I heard he wears that over his real nose because his face was disfigured in a grease fire.”

Both at once: “So are Sex Packets real or did they make that s–t up?”

That’s the level of discourse I was dealing with. I’m not mad about it though. In fact it’s probably one of the few things I look back on from my time in high school and remember fondly — the fact people used to get into arguments about the “Sex Packets” album. One friend even seemed convinced that Digital Underground were some kind of “underground” street pharmacists who could hook you up with real sex packets if you saw them in concert. (I saw them in concert at the Ranch Bowl a decade later, and I have firsthand knowledge you can’t, although Shock G did pass a joint to the crowd.) If you’re confused as to what I’m talking about though, the glowing condom shaped object on the album cover was their designer drug of choice. It promised to give users the ultimate thrill ride — a mind-altering and pleasant trip where you believed you were actually engaging in intercourse with a partner of the opposite sex.

“Oh ohh girl
You look so good to me, you’re fine
And oh ohh girl
You whispered in my ear, said ‘Not tonight’
You just won’t get with me, and you think that you dissed me
But now I can still be gettin busy — with any girl I like
No more will I ever have to jack it
Cause instead, I can just take a packet — real nice”

“Excuse me trooper, will you be needing any packets today?
(Yo B, don’t be droolin on my jacket, okay?)
Cool, just trying to get your attention
so you can take a look at this invention
Now peep these, I got some more in my jacket
(Man, what are these, condoms?) Uh uh — sex packets
It’s like a pill, you can either chew it up
Or like an alka-seltzer, dissolve it in a cup
And get this: see the girl on the cover?
You black out, and she becomes your lover
(You’re trippin) No, I’m serious, these are authentic
(Yeah, well I don’t take hallucenogenics)
Wrong again, my man, this is way more real
But since you know everything, I’ll make someone else a deal”

Honestly though neither of these songs had anything to do with why “Sex Packets” was one of a handful of rap albums that most people in my high school were familiar with. This was essentially a crowd that only knew something if it got on the radio, was in heavy rotation on MTV, or wound up being played at a high school function “Humpty Dance” was all three of these things and to this day is one of the easiest ways to get a party started. The signature bassline is unmistakable while Shock’s performance as Humpty Hump was convincing enough to start those aforementioned debates. Hump was like the hypersexualized alter ego of Shock G who was also funny in a self-depracating way. He’d mock the size of his nose, he’d mock how skinny he was, and yet he was such a ladies man that they couldn’t wait to get him home and had to handle business in a Burger King bathroom (best unintentional endorsement of a fast food chain ever). It was and still is an amazing mixture of swagger and absurdity — much like the outfit he wears in the music video.

As a side note this was the song that made me learn how to spell “Hennessy” even though it would be at least five more years before I got my first taste of the stuff. That wasn’t the only monster hit that pushed “Sex Packets” to platinum and beyond though. Digital Underground captured lightning in a bottle a SECOND time with the smash hit “Doowutchyalike,” a song which outlined a libertarian platform long before I could even cast a vote in any election. Theirs was the ultimate message of freedom outlined in the simple philosophy that you could eat, drink, smoke or DO anything you wanted to that brought you pleasure so long as it didn’t harm anybody else. What teenager wouldn’t love that notion? Rap fans or not they all bought in and swayed to the hypnotic sound of the Underground as the record spun around.

In some ways this song exposed a lot of hypocrisy to me. The same people who called me names for liking rap music and hip-hop culture were the very first ones who ran out to get down when this song came on at a high school dance. It gave me an inward chuckle to know that the Stetsasonic reference went completely over their heads, but it gave me far more satisfaction to listen to the entirety of “Sex Packets” from start to finish. There were plenty of great songs on this album that never came anywhere close to being played at a party, such as a song I later learned was EXCLUSIVE to the cassette tape I owned. I bought a CD expecting to upgrade my sonic experience only to wind up pissed off that “Hip Hop Doll” had been LEFT off.

To this day I’m left wondering how many people missed out on this hilarious ode to macking on a pretty lady while gambling in Atlantic City. I also didn’t know that Money B’s solo track “Sound of the Underground” was left off the CD, along with an extended mix of “Gutfest ’89” and the Sugarhill Records era style “A Tribute to the Early Days.” If this is your first time hearing the track, sit back and enjoy their affectionate tribute to hip-hop’s commercial roots.

Even without the cassette only exclusives this is an album that never gets old to me. From the cautionary tale of “The Danger Zone” to the fun P-Funk “Flashlight” sampling “Rhymin’ On the Funk” to the unapologetically raunchy “Freaks of the Industry,” this album covered all the bases and got back to the plate for another swing. The one thing that bogs this album down is honestly that they overdo the “Packets” theme on the B-side by carrying it on for five straight tracks — they even end the album with a “Packet Reprise.” It was a novel concept then and I’m sure if a legal version of sex packets existed in the manner they described, most of this country would miss work for at least a week straight. I can look back and reminisce about how silly some of those debates were when I was young, but the silly moments in Digital Underground’s songs are well balanced by the musical ambitions of the entire D.U. crew and still hold up today.