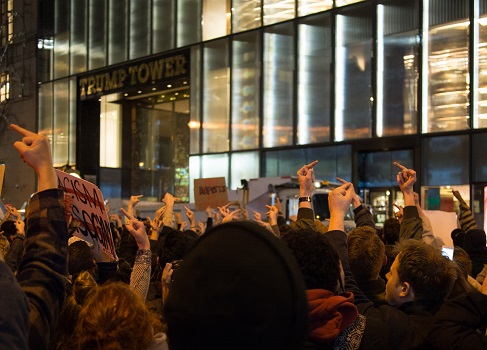 How Are We Not All Tired of Donny’s Antics By Now?

You’re undoubtedly weary of hearing about POTUS 45 by now. Many of us are equally tired of writing about his stupid, divisive, embarrassing comments at public appearances and on social media. A day without Donny sticking his foot in his mouth would be a great day for this country and would certainly raise the esteem of the United States in the rest of the world. That’s all it would take — a single 24 hour period without this buffoon opening his mouth and making us all look like jackasses. Unfortunately he dragged us right back into the mud last Friday with his “son of a bitch” remarks at an Alabama rally for Luther Strange, who must now regret that his event was hijacked by an unpredictable and reckless President who once again managed to make himself the focus of attention — and nothing strokes Donny’s ego more than that.

Even as Puerto Rico suffers a humanitarian crisis POTUS 45 continued to bash athletes who protest his Presidency by refusing to stand for the National Anthem. This really shouldn’t come as a surprise though as Trump is more interested in bad mouthing a black sports reporter who called him out on social media as a white supremacist than in doing the actual business of being President of the United States. It should go without saying that she (like the NFL players who take a knee) has the unqualified 1st Amendment guarantee to say whatever they want about a sitting President, because all Presidents swear under oath to PROTECT AND DEFEND THE CONSTITUTION including ALL of its amendments. That means Jamele Hill is allowed to criticize you Donny, as well as Colin Kaepernick and any other “son of a bitch” you don’t like.

A President should focus on the welfare of the country (and its territories) as a whole, not using the office as a bully pulpit to punch down at people with less power, but apparently the only “son of a bitch” entitled to free speech is the one in charge of our nuclear weapons, so might makes right in the end. This POTUS 45 not just an ignorant loudmouth but a dangerous, volatile one as well. He doesn’t care who he demeans or insults, whether it is honored military veterans from his own political party, political analysts from his favorite news channel or black athletes tired of his crap. Even though major sports organizations like ESPN have chided their reporters to keep politics and sports separated, POTUS 45 spent an entire weekend ensuring that the two are now inseparably intertwined, causing even normally reticent NFL owners to speak up for their players and join them in solidarity.

At some point the madness of Donny the Lunatic has to come to an end, but none of us can see when or where that moment will come, so long as his own party refuses to question him and his outrageous behavior. Even as he inches us closer at every passing moment to an actual NUCLEAR WAR with North Korea, no one seems to be willing to reign in his unlimited ability to run his mouth. That freedom he reserves only for himself and no one else — particularly if you happen to be black, transgender, or an immigrant to the U.S. He is not upholding the duties of a President and has even had to coin the term Modern Day Presidential to justify his abdication of the moral authority the office commands.

Very few people have ever made me fondly wish for the days of George W. Bush or Ronald Reagan, but our “Modern Day Presidential” POTUS makes me want them back. Both seemed to care about more than the headlines they could make by insulting everyone, and both recognized that absolute power also requires temperance in attitude and action. Even their follies and mistakes came with admittance of their failures and apologies to those whom they had hurt. POTUS 45 never apologizes to anyone, for anything, and never will. Donny is a broken record that will just keep on skipping.