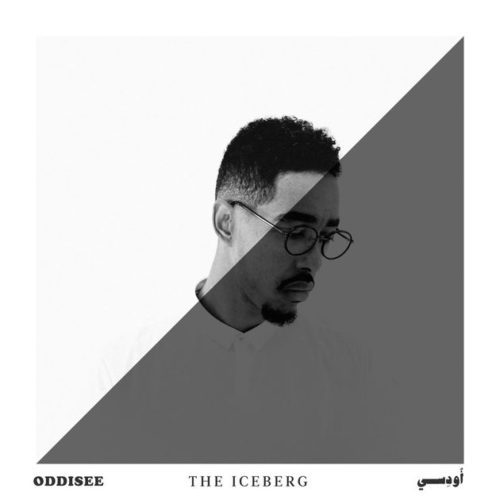 I’ve thought long and hard about why Oddisee named his latest record “The Iceberg”. There’s very much a colder sound to this than his last LP, 2015’s “The Good Fight”, but it also has hidden depths that reveal themselves over time. The global warming effect on icebergs is another angle – the white man (a.k.a. the USA) has overlooked and often ignored the impact of melting icecaps despite contributing 14% of the world’s pollution with only 4.5% of the world’s population. The record industry has similarly overlooked Oddisee (or at least his style of hip-hop) for many years now, and years later, when society has been flooded by water (or in this case, music) people will reflect and realise that this album is special and should have been treated as such at the time. Then there is the movement that is Mello Music Group, the record label that Oddisee helped start back in 2009, his album “Oddisee 101” being the first full-length to be released under the MMG moniker. They have become a force in the underground, and unless you submerge yourself in to the genre fully, you won’t realise just how deep their catalog is (and how great it is!).

What’s scary about “The Iceberg” is how Oddisee keeps improving with each passing year. When year-end lists are compiled, there is always the same name that pops up each time. Sure, Kendrick is there every year, but not for a decade straight. Whether it’s an instrumental project, an EP of leftovers, a group effort, producing another artist’s album, or one of his own solo offerings, the quality is often unmatched.

In true RapReviews fashion (let’s say we’re ‘fashionably late’), this review is telling most people what they already know or have read elsewhere. The album is dope, but it’s the depth of lyricism that continues to impress, months after release. An impressive flow is often part of Oddisee’s skillset that doesn’t get the credit it deserves and “Things” is an uptempo number with a sleight, funky house influence running through it. The way the words weave between the kicks almost negates the content of the rhymes – he could just be rapping about random ‘things’ and it’d still sound dope.

Learning from television, “Built By Pictures” talks about the underlying mistruths some view proof of wealth. Debt and the need to show others how well you’re doing when your priorities are backwards is something Jay-Z mentioned on his latest album, but the lines “Why do my people spend more and have less than / no seat to eat the meal that I’m responsible for cheffing” and “A race with the have nots / Broke but the moat’s where the Jag’s parked” are particularly relevant to a generation that frequently lives in debt. Pay is also covered on “Hold It Back”, a thumping, organ-driven look at gender equality where Oddisee shares some themes that have been bugging him but can no longer “hold it back”:

“May I never meet the people I’m inspired by
and find out that they’re really, really fake or they just kind of lied
Kind of surprised I was able to keep my mouth shut
This long, but
On this song, I’ma tell how I feel being quiet is a crime
Not enough fake G’s doing time
I’m not the only one to notice that”

Brother Ali’s “Dear Black Son” remains a standout moment in Hip-Hop this year, but “You Grew Up” runs it close. Telling the story of a young black boy’s friendship with a white boy, it not only highlights the innocence of youth but the sheer ignorance and miseducation of a generation that didn’t grow up with people of other races. The story of the boy’s father being fine with his son having a “black friend”, and then banning the son from seeing him after losing his job is not just a perfect example of miseducation, but also the generational divide and how racism is learnt. Oddisee articulates how growing up doesn’t necessarily make you more mature or necessarily informed, but can highlight how a disdain for anyone different is taught (directly or indirectly). Barack Obama’s recent tweet (that became the most “liked” tweet in history) is an example of how racism is learnt, and “You Grew Up” shows (just as Ali’s “Dear Black Son” does) how dumb this mindset really is.

On a more positive note, if you ever get to see Oddisee perform live, look out for the bass solo at the end of this track as it is much better than the recorded version.

Never afraid to try something different, “NNGE (Never Not Getting Enough)” sees Oddisee embracing his local music history by spitting to a Go-Go style instrumental. DTMD’s Toine delivers the lone guest verse and holds his own:

“I used to do it for the fist bumps and applauses
But caring about respect started making me nauseous
You walk into a room, and bammas speak to you cautious
Like employees trying to figure out who the boss is
So now I just kick it for, the most divine
Working overtime
Sitting with an open bottle, looking for an open mind
Trying not to be aggressively jaded
Because I find myself just getting faded
And I know that ain’t quite me
I step up for whatever it might be
And RSVP when inspiration invite me
Because who else gonna look out for those who look like me
Another disenfranchised boy in a white tee”

2015’s “The Good Fight” certainly had more of a positive, toe-tapping vibe than “The Iceberg”, and with “Want To Be” Oddisee delivers a snappy, feel-good number to add some balance to the album. No matter how oppressed he may feel in the United States; no matter how difficult things get in Trump’s vision of America; when it all boils down to the life of Oddisee, he just wants to be happy. That sentiment echoes throughout the album, which could have proven drearier and altogether less fun, yet Oddisee tackles such serious messages with a jazzy, almost live-feeling selection of beats. The drums are crisp and loud throughout, the finger-snaps on opener “Digging Deep” are crystal clear – this is definitely a record best experienced with a good pair of headphones. “Like Really” also highlights this, which when performed live is typically throwback in its crowd-interactivity, yet carries plenty of potent messaging aimed towards a certain Mr. Trump. The way in which Oddisee goes off on the second verse is reminiscent of an Esoteric or Big Pun in full flow – it’s a beautiful thing.

Oddisee takes the latter part of the album towards more tender tales of behaving like a gentleman for the lady in his life. Before you reach for the sick bag, it’s all done without an ounce of soppiness and makes clever use of the tried-and-tested metaphor of hip-hop being a woman (ie. Common’s “I Used To Love H.E.R.”). Many have tried to update the classic Common Sense track, and Oddisee takes it in interesting directions:

“I got a lover but it’s complicated
We’ve been off and on, trying to keep the fire warm
But a brother jaded
I’ve even moved up to Brooklyn so that we could bond
Feel like I see her even less then when I lived away and
Suffocated by the city she ain’t ever home
She in LA or any other place that ain’t my arms
Can’t say she cheating because she was never mine alone
I just think I’m better for her than the drug dealers and the lie tellers
Yeah am I wise but I could be wrong”

You’re not wrong Oddisee. As Masta Killa once said, “the dumb are mostly intrigued by the drum,” and yet Kendrick’s numbers don’t lie. J Cole’s number don’t lie. Continuing to fight the good fight, the lack of any curses only adds to the appeal for a wider audience. Back in 2001, former RapReviews writer Noixe cited The High & Mighty’s “Home Field Advantage” as the album to recommend to someone who is new to hip-hop music. As good as that album is, in 2017, Oddisee’s “The Iceberg” is that album, particularly if you’re an adult.