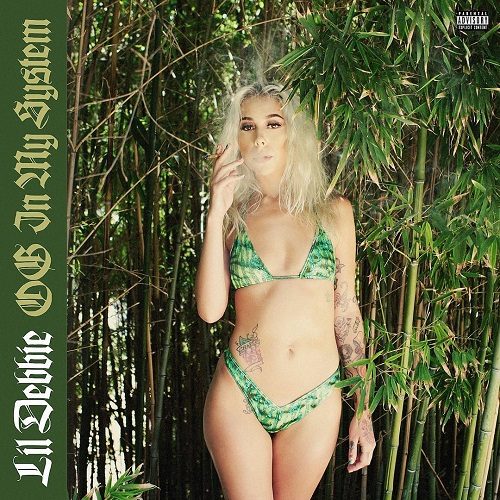 Lil Debbie :: OG in My System

It’s unfortunate that this review cannot overlook gender and color of skin, particularly when the artist herself chooses not to make them an issue. But when the same artist doesn’t offer anything of essence to discuss, that’s where you will end up. Plus I seem to remember that today’s subject used to be part of a White Girl Mob. So there.

To get to the bottom of this, let us consider the fact that white female pop stars, notably some of the most famous ones of the past 30 years, are susceptible to burst into short segments of rapping. We’ve heard it from Madonna, Lady Gaga, Gwen Stefani, Avril Lavigne, Miley Cyrus, Taylor Swift, Lana Del Rey, Ke$ha, Meghan Trainor and Pink. It is something of a break of character, not just because it happens unexpectedly and is sonically and technically so different from the sung parts, but also because it destroys the illusion the recital tries to maintain. It’s a fracture, a disruption of the steady flow of melodies and harmonies. It’s insubordinate, sassy, provocative, an act of liberation, or comic relief even. It, at least momentarily, wrecks the image of the gifted singer, the romantically occupied artist, the well-behaved young lady. They’re not supposed to do that, but they do it anyway.

But why are they not supposed to do that? Am I not just perpetuating an old myth based on stereotypes about gender, color of skin and ultimately rap music? In most cases these rap breaks are part of the pop package, a calculated misstep that only reinforces the message that the character was conveying anyway. Can Madonna really shock anyone with a rap part? With a really good one, maybe, but in any case that woman wrote the book on pop provocation. And for the record, Madonna was already semi-rapping as early as 1984 on Jellybean’s “Sidewalk Talk,” performed her fashion world shoutouts for 1990’s “Vogue” in rhyme form and conjured up her earliest hip-hop connections (“I threw my tag around, let B-boys take me for a ride”) alongside Nas on 2015’s “Veni Vidi Vici.”

Since we’re going back in time, why not go to the very beginning when Debbie Harry rapped on Blondie’s “Rapture,” a song that, released as a single, in early 1981 earned the distinction of becoming the first Billboard number-one hit with rap vocals (which, for the record, doesn’t make it the first ‘rap record’ to do so – those honors went to Vanilla Ice’s “Ice Ice Baby”). Yet “Rapture,” while undoubtedly historically significant, is perhaps not the ultimate precursor to every rap performed by white women. Blondie’s Debbie Harry and Chris Stein were part of the in-crowd that helped clear hip-hop’s way from the Bronx to Manhattan. It was something they had picked up personally, the mentioning of Grandmaster Flash and Fab 5 Freddy by name a nod to the hip-hop scene they had witnessed themselves in its early stages.

More than anything, “Rapture” is a symbol of the cultural crosspolination in cosmopolitain New York that also got under hip-hop’s skin. On the part of Blondie, it was an artistic appropriation that happened on the same arch where the ideas of German electronic pioneers Kraftwerk deeply imbued one of hip-hop’s most historic singles and drum breaks were discovered on records by white rockers like Thin Lizzy, Billy Squier, The Rolling Stones and The Beatles. After the aforementioned namedropping, Harry continues with surreal, space-placed stanzas, which share some similarities with “Planet Rock,” “Adventures of Super Rhyme” or “Beat Bop,” but also follow the trajectory of postmodern art. “Rapture” is definitely not the template for any fake blonde who spits a few bars.

One major difference between that crucial period of hip-hop’s formative years and now is that rap wasn’t yet so rigorously defined as a black male thing. Obviously the variety in rap is greater than ever, but the symbolism of a long lineage of black male rap superstars is hard to shake. A white woman rapping, whether in jest or serioulsy, still makes the audience sit up. Although they don’t have to go against a singer image, that goes double for female white rappers, a concept that was irregularly exploited by the record industry until it hit the jackpot with Iggy Azalea a few years ago.

That’s why the very small subgenre of white female (American) rap is populated by often curious characters that can’t even begin to be all things to all men – and women – who are into hip-hop and rap. Not having to or not being able to fit a norm potentially offers a world of possibilities. But what if it is not within someone’s realms of possibility to step into that world? That’s when you end up with something like “OG in My System.”

In all fairness, Lil Debbie delivers a fully functional modern album. On the plus side, there’s the production, which incorporates tropical and trap touches without too openly pandering to radio. On the surface, the individual songs have meaning and purpose (at least by today’s relatively low standards). “Gimme That” is noteworthy for expressing desire without a single sexually explicit expression. “Real One” is fairly realistic in terms of what kind of love she expects. And the Clinton Sparks-produced “All We Need Is Love” is a well-meaning plea for a more peaceful world, which sees her taking account of the very basics of our social fabric that as a white female rapper she perhaps isn’t mindful enough overall: “Cause we all been the victims of division / like race, class, sex and religion / It’s a prison.”

For the majority of “OG in My System,” however, Lil Debbie is eager to confirm a sort of status that she may only be imagining or that at least hasn’t hit the rest of the world. Or did you know that Debs is “a boss bitch”? Want more quotables featuring the b word? “Bitches talkin’ ’bout they new shit, but I’m the blueprint.” “Most of these bitches be amateur, I’m like a vet in this bitch.” “Bitches ordinary and we nothin’ short of legendary.” Given how little else there is to report, it is unfortunately as bad as it sounds. On her new album Lil Debbie is a trapping, rapping cliché come alive indulging in emceeing mimicry. “Name a bitch that’s tighter, name a crew that’s colder”? Let’s keep that question rhetoric.

But let’s not fool ourselves. We’ve seen thousands of rap artists who who aren’t white and who aren’t female who were just as unoriginal. As mentioned, however, the possibility presented itself to this particular specimen to embark on a search for artistic identity. The NorCal-originating, SoCal-operating artist has shown her cool and her bubbly side on and off record. She has it in her to come up with something more exciting. But at least this time around she lacks charisma, let alone star power. The music, as if aware of the failure ahead, doesn’t waste energy to change anything about it. There’s a certain understated quality to it overall. “OG in My System” doesn’t really want to be more than a small-sized indie project. Which is not out of tune with current trends. It’s just that it lacks the sophistication to elevate it to at least sleeper status.

There may not just be OG Kush in her system, she might also be an OG within her system, in the sense that she’s not new to this. At least not as new as others. Even moreso she should act the part. Someone like Debbie could normalize the situation for white female rappers. She won’t achieve it by doing common clichéd rap in a way many people sadly will perceive as normal. I’m not denying anybody’s right to use rap as a pressure valve or form of escape, to create a superhero (or superheroine) character for whatever reason. Male MC’s do this all the time. This is about the specific creative choices she makes. Which are just lame and lazy. It’s been a long way from Debbie Harry to Lil Debbie. Thankfully there have been many interesting stops in between – as there will be further down the road. Maybe even for Lil Debbie.