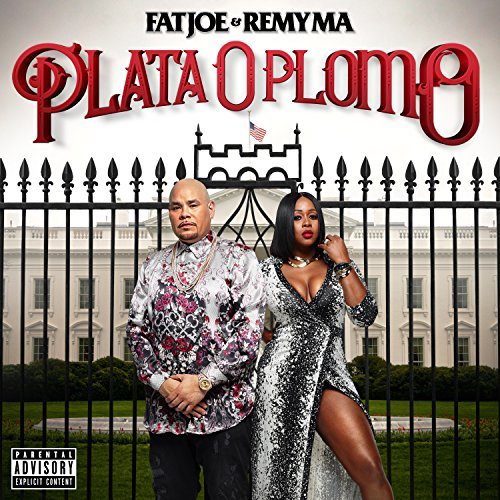 Fair play to Fat Joe. No matter how many purists knock his career post-Pun for leaning towards club-rap in the vein of French Montana, it’s helped him remain relevant in a sea of jaded New York emcees struggling to transition through the ringtone era in to the South’s dominance and the mumble rap era we have now. Ten years ago, I was the type of fan Joey Crack called out on Twitter recently that wished he would just do tracks with D.I.T.C. and DJ Premier, seeing as that is often where his classic material has stemmed from. Joe’s done well to ride the waves and deliver popular party tracks every few years to keep the pockets full, and with “All The Way Up”, momentum increased in 2016 just as Remy was lining up her attack on Nicki Minaj.

“Plata O Plomo” was better than I expected. A lot better. Remy Ma is vicious throughout the record, reminding us all why she has the reputation as a fire-spitter. Ever since I heard her on the “Ante Up (Remix)” by M.O.P. I was never keen on her delivery – it cut right through me much like the awful Roc-A-Fella alumna Amil. Thankfully, Remy has developed a mildly deeper, more precise delivery since then and it’s made her rhymes much more impactful. The viciousness that her Nicki Minaj diss showcased is here (if used sparingly) and is often the best part of this record. Lines like “If I liked your man’s face I would’ve sat on it” hark back to the heyday of Kim and Foxy when the ladies could embarass any man with their putdowns. There are further jabs at Nicki on the nod to Pun, “Spaghetti”:

“Y’all bitches got fat while we starved
Shots in your ass, pads in your bras
Y’all some liars it ain’t no facts in your songs
And yeah that crown is coming back to the Bronx
Take away they stylist, they don’t know what style is
I’ve been fly since junior high, bitch
You the biggest bird on Sesame Street
And I’ma scramble ya egg, keep running your beak”

Fat Joe albums have always been reliable, particularly for those pounding street anthems. “My Lifestyle”, “Take A Look At My Life”, even his 1993 single “Flow Joe” that had snares to wake the dead; they all showcased Joe’s strengths. Direct, aggressive, and a wry sense of humor (the bluntness of the name ‘Fat Joe’ still makes me smile), there’s no denying Joe is underrated as far as emcees that have been around for 25 years. He held his own on “Twinz (Deep Cover ’98)” against one of the most talented lyricists to grace this planet, and he holds down a similar role on “Plata O Plomo”, with Remy often stealing the show.

Just like the club these tracks are designed for, guests are spilling out of the door. Sevyn Streeter kills the hook on “Go Crazy”, Kat Dahlia does her best Rihanna impression on opener “Warning”, but the (literal) unsung hero is Kent Jones with his butchered AutoTune vocals. “Swear To God”, “Spaghetti” and “How Can I Forget” all utilise the hench, typical Fat Joe kinda beat, and when the duo stray from this style, the album returns to the blander New York rap we’re used to hearing from Khaled and co. Given the lyrical content is bordering on corny, Joe does a good job of maintaining his respect despite, like Ja Rule’s autobiography, his attempts to steer away from 50.

With the recent support for Puerto Rico and his work alongside Jay-Z in getting aid to the island in the wake of the devastating hurricane Maria, it would be good to hear some more introspection and shed some light on what is now a legendary hip-hop career. For now though, keeping New York in the ears of the masses whilst his partner in rhyme drops some rabid bars, is more than welcome and “Plata O Plomo” ends up being one of the better Terror Squad releases in recent memory.