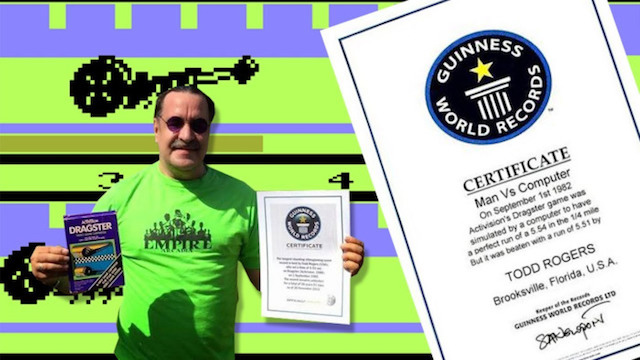 I’m once again indulging my enthusiasm for video games to tell you a little story about Todd Rogers. Back when I was a kid Rogers was known “Mr. Activision,” a nickname he earned for holding multiple world records in various Activision games made for the Atari VCS, which most people refer to as the Atari 2600. In a time before the internet was widely available outside of collegiate settings or military installations, word of Mr. Activision’s fame spread through print magazines like Electronic Games, who conferred this fame upon him after noted video game record keeper Twin Galaxies allegedly confirmed the high scores and world records he set on multiple games.

Now I say “allegedly” because many of Todd’s records have been questioned over the years, most famously the time of 5.51 he supposedly achieved in Dragster. Dragster is a fairly simple Activision title but the fun comes from trying to do better than your best. You’re supposed to rapidly shift gears at precisely the right times to emulate what a real drag car racer does, and by Atari VCS standards this not only looked but sounded good, which made it even more appealing to set a time and then try ONE MORE TIME to see if you could do it a little bit faster. The only problem is that 5.51 is mathematically impossible according to the actual way an Atari VCS works and the programming code the game runs on. This has been tested by a method called “TAS” short for “Tool Assisted Speedrun.” A computer simulation playing the game doing the absolute best that a real person could do with perfect reflexes at the precise moments in the code one could make said moves has never beaten 5.57.

Now growing up having idolized “Mr. Activision” as a video game superstar, I didn’t want to debunk my icon. In fact in several discussion threads about this topic I would argue that it’s unfair to make Rogers try to revisit this high score today, because nobody would have reflexes as fast as they were over 30 years ago. Father Time is cruel like that. The question still daunted me though – could Todd Rogers really have done better than the game’s own maximum possible best under a perfect test? I framed the issue in my own mind as “man versus machine,” much like Deep Blue versus Garry Kasparov, without even considering that Occam’s Razor applies. The colloquial version of Occam’s Razor is “the simplest explanation is always the best” and the simplest explanation would be that Todd Rogers was just plain lying. How then did Twin Galaxies, a supposedly reputable score keeping body, accept his scores as the truth? THAT is where it gets interesting.

As both Apollo Legend and Omnigamer have documented, Rogers had an “inside man” at Twin Galaxies, one with a history so sordid and ugly that I don’t even want to report on it here. Seriously. I’ve covered Suge Knight on this website and I would sooner talk about HIS misdeeds by comparison. Anyway to make a long story short most of Todd’s records that were allegedly verified by a Twin Galaxies referee actually weren’t. A record would be entered with a note that it was verified by video tape, only when somebody looked for the tape surprise surprise it didn’t exist. In some cases it has been documented that Rogers actually entered the scores into the database HIMSELF during the time he was a Twin Galaxies employee (talk about your conflict of interest). Still I wanted to believe in “Mr. Activision” and kept trying to convince myself it wasn’t possible. I’ve been down this road before. I tried to convince myself Bill Cosby might be innocent of the accusations against him but ultimately he admitted in a sworn deposition that yeah – he actually did do at least SOME of the despicable things he was accused of. Eventually you have to let your childhood naivete go and accept the truth.

Today is that day for me as gaming historians and gaming websites are all simultaneously reporting that the pile of evidence against Mr. Rogers got too large to be ignored, and as a result Twin Galaxies has formally removed all of his world records and banned him for life from further entries. This only makes sense in the light of the mounting evidence. One particular Atari game called “Wabbit” had an alleged Todd Rogers high score of 1,698 but the game actually becomes unplayable at a maximum of 1,300 when the on screen enemies move too fast to interact with. This is known in gaming lore as a “kill screen” – achieve a point in the code of a game that the programmer never anticipated thus causing the game to unceremoniously and sometimes graphically come to an end. Here’s an example of 1,698 being impossible to achieve under any circumstances, with or without a TAS.

Now just to backtrack a little bit and make sure nobody gets the wrong idea, I’m not saying that lying about getting some high scores and subsequently becoming famous is equivalent to allegedly drugging and raping numerous women enamored with you because you’re ALREADY famous. They are in no way shape or form equivalent. The only equivalence here is that somebody I once looked up to is not what they appeared to be, and it’s yet another reminder that placing faith in idols can blind you to the obvious truths about them. Perhaps there’s an even better observation to draw though.

The thing I’m reminded of over and over again is that human beings are flawed. I’m flawed, you’re flawed, we’re all flawed. Even the saints among us must have sinned so badly at some point that they swore to never sin again. None of us are perfect, and when we look for perfection in others, we only set them and ourselves up for an eventual fall. Instead of looking for perfection, or seeking to lionize those who seem to achieve it, it might simply be better to say “anybody on any given day can do a great thing one time.” Some of those things may truly amaze us, like Michael Jordan winning a playoff game while suffering from debilitating illness, but the fact he could get sick ultimately just proves he is still human and flawed. The flaw in Todd Rogers was that he wanted so badly to be famous that he concocted a lie and convinced others to spread it as the truth so they could be famous by association. That house of cards has finally come crashing down and “Mr. Activision” reigns atop it no more.