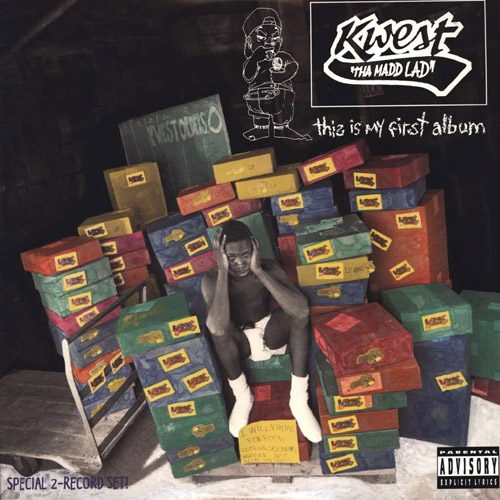 Kwest Tha Madd Lad :: This Is My First Album

This is one of those rare albums that could have been a Back to the Lab review TWICE over. The original edition of Kwest Tha Madd Lad’s aptly named “This Is My First Album” came out back in 1996 on American Recordings, originally known as Def American when it was started by Rick Rubin. It got a re-release back in 2013 as “The Deluxe Edition

,” adding seven new tracks – mostly instrumentals and remixes along with a new song called “Traumatized.” For the purposes of this review I’m going to be talking about the original version I still own, but if you’re interested and click on the album cover it will take you to the deluxe joint on Amazon. It’s cheaper to come by and includes more so you might as well go for the lower cost upgrade.

You won’t be able to glean too much information from Kwest by the traditional methods like Wikipedia, so to tell you the story I’m going to take you on a trip down memory lane. For a few years in the 90’s I had ambitions of being a disc jockey fueled by easy access to working at college radio stations, and I was so eager about my hustle I volunteered to do just about anything including taking on made up titles like “director of urban contemporary.” That was a glorified name for opening up all of the free promo records that were mailed to the station, crossing out the songs we couldn’t play due to their profanity, and calling labels to ask if they’d hook us up with radio edits and twelve inches. The height of that inglorious job may have been when I got the moxie to call up Duck Down and wound up speaking to Dru Ha or Evil Dee (God’s to honest truth I can’t remember who answered the phone, it was one of the two) and hearing the shocked reaction that a college radio station in Iowa wanted their joints. They hooked us up lovely. With American Recordings though I never had to ask. We were already “on the list” when I started and routinely got everything they put out from rock to rap, including Kwest’s first single “101 Things to Do While I’m With Your Girl.”

Over time my radio ambitions faded and it was largely my own fault. I took my made up title too seriously and thought I was hot shit when I really wasn’t, then learned the hard way that even my edited radio friendly playlist for college radio wasn’t going to make the airwaves anywhere else. In fact to be frank it wasn’t going to get play ANYWHERE in Iowa. If I was willing to move to Chicago, Minneapolis or Kansas City and start over again at the bottom rung maybe I could have hustled my way back up to my previous level, but I was quickly figuring out that I’d have no chance to program my own music even if I did and would have to play what somebody else wanted, all while making less than a living wage to do so. I unceremoniously “retired” from being a deejay and refocused my efforts on being a writer instead, something I had already been doing since the early 1990’s anyways. That less than radio-friendly Kwest joint stuck in my head though, so when I moved to Michigan a few years later and found the full album on CD for eight bucks at Encore Records, I copped it.

I could turn this whole review into a trip down memory lane if I wasn’t more restrained, because “I Met My Baby at V.I.M.” actually led me to seek out the store for myself on a trip to New York in ’99 – I had to see this legendary joint for myself. Anyway I was hooked on Kwest between these two tracks alone, because “101 Things” was a mad funny song set to a great loop of Brick’s “Living From the Mind,” while “V.I.M.” came from a direction I never would have expected with The Deele’s “Shoot ‘Em Up Movies” from 1987 and did so in an INCREDIBLY smooth ass way. Both songs were produced by Dan Charnas, not too surprising since he ran the rap division at American for a while, but there’s quite a diversity of producers and very few whack songs on this album. In fact you’ll probably notice a lot of familiar loops that Kwest freaks as well as anybody else did. Take “Disnexone” for example, where Erik Romero jacks the same Bobbi Humphrey song that Brand Nubian did for “Love Me or Leave Me Alone.”

If you’re an aficionado of Bob James samples you’ll undoubtedly appreciate “Lubrication” as well, a co-production between Romero and Madd Lad that borrows from “You’re as Right as Rain” and also features scratches from the legendary Kutmasta Kurt.

And even though he’s little discussed these days Tony D was as dope as they come in the 1990’s on the production tip and he blessed Kwest nicely on the story “Herman’s Head.” Even though Kwest had a reputation as a freestyle rapper with mad funny punchlines, this song (much like “V.I.M.”) really showcased his growth as a storytelling emcee who could draw you into a deep narrative.

“I felt like f–kin him up myself after he got back his health
But put aside all that, when he admitted he needed help
Checked himself into a center for drug abuse
and started turnin his life around without all of the cocaine use
As soon as he got released he hopped on a plane and went down South
Said he needed time to think, and finish straightening things out
Came back up North a little bit bigger and a lot more wise
Gave me a black man’s hug and cried as he apologized
Told me the cocaine had really taken over his life
One night when high he almost slit his wrists with a butcher knife…”

I don’t want to spoil the story for you so listen to it yourself to find out what comes next. Now the $64,000 question is “Why didn’t Kwest blow up? All these joints are butter.” I think there are a lot of reasons for that actually. Kwest was caught in one of those “too big to be small and too small to be big” situations. He had a great underground reputation as noted, and he was signed to a big label with a lot of clout, but in the 90’s American was starting to shift focus away from hip-hop, something one couldn’t help but notice when they dropped the “Def” in Def American and became just plain old American Recordings. It’s not like they didn’t have some clout with artists like Chino XL and Sir Mix-A-Lot, but it always felt to me like they only wanted to cash in on hits (see “Baby Got Back”) and didn’t care so much about helping hip-hop artists grow or promoting their full length albums. I should read Charnas’ book “The Big Payback” to see if my take on it is right or not, and that’s a project on my “to do” list now that I’ve written this review. The irony for Kwest is that he delivered a full album – well produced, a wide variety of topics, lots of flavorful humor and some really interesting slice of life tales that you could either relate to or learn from. Once they pushed “101” and “V.I.M.” as far as they could, they gave up on Kwest, or at least that’s my take on it. He never got as big as they wanted, which is why you can’t find a Wikipedia page for him now, but I still remember “This Is My First Album” fondly and in my opinion it holds up to this day.