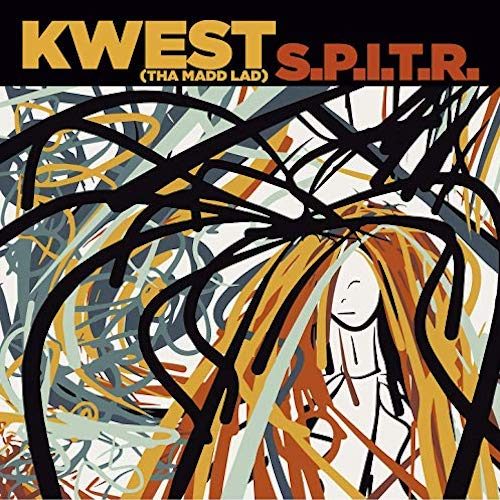 A couple of years ago I took the TARDIS back in time for a nostalgic visit to the 1990’s, when one of the most slept on dope albums of the day was Kwest Tha Madd Lad’s “This Is My First Album“. There was absolutely no reason he should have bombed. He was signed to the label legendary producer Rick Rubin started (American Recordings a/k/a Def American), he was MAD funny with punchlines, and there was a serious buzz around the single “101 Things to Do While I’m With Your Girl“. So in the words of Matt McMuscles, “WHA HAPPUN?” Everybody failed to do their job. The label serviced it to college radio but didn’t push it to major stations. The PR people didn’t get him interviews in print and on TV. The so-called “taste makers” who flipped tapes didn’t do their research. Kwest made a great album no one heard except for me and a few other diehards. Oh well.

I thought my review would be the beginning and the end of the story but to my surprise Kwest read it and reached out to me! He was surprised to see how well received and memorable his first LP had been for me, and he let me know he had just recently dropped some new shit. I had no idea he had a big comeback in mind but 2019 surprised us all as the original punchline “S.P.I.T.R.” was back for another go. X-Ray Da Mindbenda was as much of a fan of the original album as I was and he coaxed Tha Madd Lad to step back into the booth with Aneeway Jones providing the beats (except for track five which X-Ray did himself) while X ex-ecutive produced the whole affair. To reintroduce him to a new generation the album starts off with “Kwest Loves Questlove’s Kwest Love”.

Things are off to the races after that on “World Premier”. Built on a hook constructed from Psycho Les’ verse on The Beatnuts classic “Off the Books” featuring Big Pun and Cuban Link, the song feels as appropriately East coast NYC in its architecture as its delivery. Kwest’s vocal tone has changed surprisingly little over the last two decades. You can hear a little bit of his age showing through, but other than that the inflection makes you smile even as he throws stinging lyrical barbs without mercy. They’re not just funny raps though they’re clever. Kwest eschews simple rhyme structures and makes you hang on a little bit longer ’til he hits you with the uppercut.

“My notebooks is possessed – to open, consult reverends
And my phone holds fire like a Galaxy Note 7, see?
Time is an anomaly; +Inspect+ then +Deck+
Disconnect your head from neck when ‘I bomb atomically'”

It feels like I just stepped back in time all over again in more ways than one. “Bourbon Street” reminds me of the days I hit rewind over and over again to write down every ill line someone said, eager to break them all down to organic compounds. Kwest rewards the listener for paying attention on these tracks because he’s got “more bars than Bourbon Street” and casually flips his own nostalgia into the lines knowing that heads from that era who are checking for him today will be into pressing rewind too.

“Been M.I.A. from the M-I-C for a minute
Now the O.G. ready to G-O EPMD Back to Business
Create heat on breakbeats and beat breaks like a sadist
My tongue come with boxing gloves, and you’re rockin with the greatest”

I hate to sound critical when I’m having this much fun listening to something but there are a few notes about “S.P.I.T.R.” I’d be remiss for not sharing with you. This EP is only 20 minutes long, and if you take out the intro and the previously mentioned track five (which is just X-Ray talking over the beat on some “respect the culture” vibes) you’re down to 16 minutes. In addition to that you’re here to hear Kwest but he’s sharing the spotlight with other cats like L.I.F.E. Long on “SPIT (Speaking In Tongues)” and Darc Mind on “Power of Three”. In addition “Thoughts” seems like a inconsistent way to end the presentation if you listen to it sequentially. Kwest still has bars, but there’s very little to hold them up, so it feels more like a stream-of-consciousness freestyle than an intricately built song.

Don’t let any of that dissuade you from picking up a copy of “S.P.I.T.R.” It’s a true pleasure to know that Kwest Tha Madd Lad is still ill as hell after all these years, which makes me want to clap like wrestling fans at an awards ceremony and chant “YOU’VE STILL GOT IT!” Indeed Kwest, much respect. Please don’t make us wait another 20 years for the next chapter.