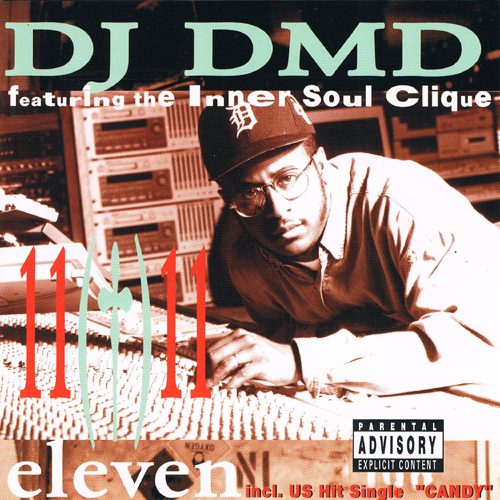 We tried to retrace DJ DMD’s history on occasion of our look back on his best known album, “Twenty-Two: P.A. World Wide.” It’s a little known fact, however, that “Twenty-Two” was actually the mid-part of a trilogy of albums whose denomination built upon DMD’s special relationship with the number 11. “Eleven” was therefore the name of his first album, although its actual release status is uncertain. There’s some indication that “Eleven” saw a fairly limited release (if any at all), an impression backed by the promo-like design of all American copies in circulation (manufactured by Ichiban). The artwork pictured above belongs to the edition that was licensed in Germany to Blue Flame Records.

“Eleven” is set up similarly to its successor, D handling the bulk of the production with the help of studio musicians and assuming the lead vocally. It’s not entirely clear who comprises the accompanying Inner Soul Clique, but rappers Lee Masta, Bluelite, Bull and Momo are all featured several times (while Boonie Loc was a guest of the state).

Looking back on the time when they were teens grappling with this new artform in Port Arthur, TX, early collaborator Pimp C ascribed DJ DMD an advanced understanding of the technical side of rap music. He was basically the small scene’s frontrunner. But once the erstwhile Disc Master D was finally ready to proceed with his own project in 1996 (the year most of the tracks here were recorded), he had to align his sonic vision with the people who were leading by a wide margin. The “Intro” recalls Rap-A-Lot’s mid-’90s sonic structures, with a dash of Dr. Dre’s constitutive Aftermath period. As is customary for the era when southern records (at least those outside of the Rap-A-Lot universe) were primarily influenced by the West Coast, DMD also employs spooky, sporadically long-winding synths, as found in the more gothic currents of G-funk.

But, and that’s where the man establishes an identity of his own, the linchpin of DJ DMD as a producer is the live instrumentation. He creates solid streams fed by inflows from funk, blues and jazz sources. DMD has literally everything on lock with a lean but strong rhythm section, but it’s the subtleties that put a distinct complexion on “Eleven”. While subsequent southern rappers from Young Jeezy to Rick Ross banked on heavy musical artillery to bolster their claims, DMD and the Inner Soul Clique prove there are other ways. Tony Draper’s Suave House Records is a main influence on this album not just sonically but in terms of the stealthy nature of its approach. Check the first regular song “Holdin’ Fire” where every instrument appears scaled down but the sound is still rich. Lee Masta goes about it in the same careful manner:

“The city I live in ain’t home to that many haters
Mostly muthaf–kas known for bein’ players
Not hoes’ lifesavers; rollin’ on candy
Not flaggin’ with bandanas but they sayin’ Lee’s the bandit
Man, we need to spread our wings, I got the juice
I’m holdin’ like I should be, ’bout to let the lions loose
Quicker than Bruce, I’m feelin’ stronger than Zeus
Rippin’ knots loose, breakin’ free, throwin’ up the damn deuce
Now – I call that puttin’ in work:
I’m underground, my foot, my ass and my dick in the dirt
I couldn’t do shit but come out with my pants down
The rap depression over, feel free to dance now”

Bun B (opening with a Chuck D reference) being brought in for the second half is not that much of a surprise, but the following “So Real” is quite a stunner because it features (the strictly slowed down) DJ Screw and his brother Al-D. From the Isleys interpolation to Ronnie Spencer’s golden vocals, this is classic Texas slab music, right down to DMD acknowledging Screw’s considerable operating range:

“I represent P.A., down for my block
Been rappin’ since the 7th grade, still won’t stop
I’m down with O.G.’s pumpin’ nothin’ but them O’s
Ballin’-ass niggas keepin’ me in studios
I puts it down tight, tight like white
These gangsta-ass beats keep my pockets feelin’ right
My click so real, ’bout to make a mill
I got to pack the steel in the Land of the Trill
Been listenin’ to Screw since nine-two
Niggas talk s–t, well, what you wanna do?”

The region has traditionally not been shy about its influences but also always had a knack of repurposing things for its own purposes. When DMD remakes L.L. Cool J’s “Kanday” to confess to his sweet tooth for sugary car coating on “Candy”, best believe his version may be a bit on the fried and funked out side, but it’s still close to the original (down to the James Brown vocals).

Although having fallen into oblivion, “Eleven” is clearly a product of a thoughtful era for rap below the Mason-Dixon. Expanding a tried and tested break with slight G-funk textures, “Time Served” does the exact opposite of glorifying street life, the whispered wake-up call (borrowed from Marvin Gaye) pronounced more explicitly by a Brother from the Nation of Islam, as DMD criticizes: “You don’t even know what yo people died fo’ / Treatin’ yo freedom like a 2$ hoe / Geekin’ offa cold-blood money to fold / One slug and you end up cold”. Immediately after, Lee Masta concedes, “I don’t see nothin’ wrong with hustlin’ if you’re strugglin’ and gotta feed yo peeps”, but “Raise the Sky” makes the point even clearer than the previous song – nobody is untouchable.

More boxes are checked. “Hope Ya Got the Kite I Sent” features the only guest beat (by Crumbz), “Legalize and Advertize” the aptly named Superb Herb, “All These Niggaz Crazy” singer Reggie Cooper pulling out all the stops, and “What’s Up Now?” DMD boasting, “You niggas can’t fade my beats” (and repeating André 3000’s historic Source Awards assertion from the year before that “the south got something to say”). At least in spirit, DJ DMD was right there by OutKast’s side, and although he protests his due props on key track “Ghetto Gold”, like many artists before and after him he realizes that respect is priceless:

“One for the money, two for the bass
Tell me what the f–k I gots to do to get my face in the place
I don’t understand why this game is played this way
When niggas be bumpin’ my shit from here to L.A.
I got them O.G.’s bangin’ off my beats from dubs
And that really don’t upset me cause a dub equals love
in my hood, it’s all good, but what gets a nigga
is the fact that my bank account be readin’ zero figures
I must admit, this shit ain’t feelin’ right
Blowin’ up, then bein’ broke, it make a muthaf–ka wanna fight
But then I hear my s–t pumpin’ out some Pioneers
And my tears and complaints turn into weed and some drank
And ah, I never loved them white charts anyway
I’ma chose the ghetto over pop charts any day
So it don’t matter to a nigga how many records that they say I sold
I know I’m goin’ gold in the (ghetto)”

“Eleven” is a curious release, because it could and should be more than a footnote in Texas hip-hop history but apparently it’s not. Not as much as bootleg tapes of it may have circulated in the Lone Star State. In the interim it’s available on streaming platforms, to anybody interested to hear the all-star ‘Screwed Up Click Mix’ of “So Real” or the incognito appearance by Pimp C on the “Candy” remix. Representing a particularly classy sounding period of southern rap, “Eleven” deserves a decent sound system for consumption, because that’s where it will find complete expression. Its impact remains hypothetical (ironically, given the availability in Germany, not necessarily with regard to the claim “Goin’ overseas […] showin’ Europeans how these southern niggas act”), but that doesn’t make it any less entertaining or interesting.