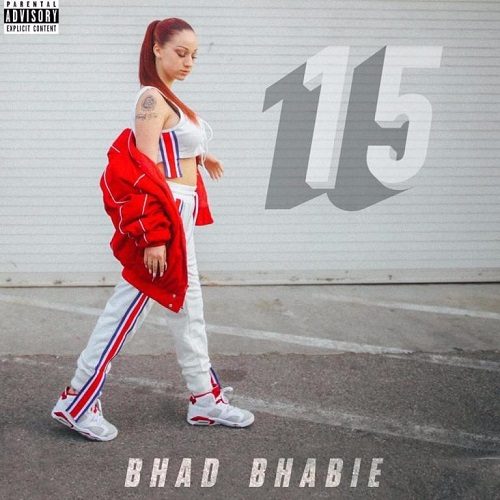 Sometime in the near future, when what we currently call the internet will be a mass grave of dead, irrelevant data, “15” will long be buried underneath. To claim that the net never forgets is to ignore that people’s attention span continues to drop further and further below the ten-second mark. If our online navigation is geared towards instant gratification, virtues such as contemplation, consideration and internalization are a thing of the past, whether something resembling an actual gratification awaits or not. There is always the tease of the next trending thing.

Bhad Bhabie is the rap moniker of American teen Danielle Bregoli whose 2016 appearance on ‘Oprah’-spinoff talk show ‘Dr. Phil’ got condensed into the viral phrase “Cash me ousside, how ’bout dat?” There’s no word of whether or not someone took her up on her invitation (which had to be translated by her overwhelmed co-starring mother), but outside of amused live audience members and beyond ensuing Instagram piss-takes and YouTube parodies, there seemed to be something about her, if only the vaguest of potentials to entertain people.

The internet may be good at public shaming, but it also provides the possibility to strike back. Suppose you wanted to replace those people who laugh at you or shake their heads at you with sympathizers who don’t exclusively take you for a joke, who let you go on, who let you explain yourself, who take a more substantial interest in you than your average TV therapist is willing to invest. How can you gain at least some kind of control over yourself (and the life that’s ahead of you) and leave behind that personality whose buttons are so easily pushed? The girl could have submitted herself to her own reality show and fully surrendered to good old TV exploitation.

What’s a girl to do when her rebellious, even rambunctious temper suddenly brings her the flattering but conceivably fleeting attention of online fame? What are some actually valid options to make it last a little bit longer? A rap career, of course! And I say this with only the slightest hint of irony.

Former Secretary of State John Kerry had to find out that you can’t cite “the insecurity of a teenage girl” these days, not only because serving as a reference to some political pyromaniac’s fundamental character deficit would be an insult to teenage girls worldwide but because this type of gender generalization is sure to be met with opposition in this day and age. (That would be a positive role the internet and its misbehaving offspring social media would occupy.) If the person who now stands before us as Bhad Bhabie once might have been overcompensating her insecurities (as well as deeper issues), she is now overcoming them (if perhaps not the deeper issues). Rap allows newcomers to establish a confident persona from the very beginning. Other genres don’t necessarily offer the same option, especially to young, inexperienced artists.

That doesn’t mean that she wrote her own lyrics, organized the album’s contributors and went out to get a recording contract herself. She didn’t. A debut like this doesn’t happen just like that, but it’s reasonable to assume that the people who undertook to mold Bregoli into a rapper made their decision based on the fact that the defiance and determination she displayed publically would go some way towards defying the odds (on personal and commercial levels).

From her slurred speech back in 2016 you would expect Bhad Bhabie to mumble-rap, and while she’s partially affected by the negligent vocal styles of the local rap variations she latches onto (South Florida SoundCloud, Chicago drill, Atlanta trap), she makes an effort to make herself understood despite clipped words and abstract language. Tonally Bregoli is naturally inclined to her rap role. The flow is less reliable, still in its experimental phase on efforts like “Geek’d” and “Hi Bich”. More experienced guests also tend to expose her shortcomings, on the technical side specifically the City Girls duo on “Yung and Bhad”.

But she manages to not get completely steamrolled in her duets with YG and Lil Yachty and even interlocks tightly with Asian Doll on “Affiliated.” The problem with the Bhad Bhabie project, of course, was never to teach her how to rap, it was negotiationg an acceptable approach to appropriating the cultural codes of rap. And in that regard “15” is the expected embarrassment. As market-tested with her first single “These Heaux” (not included here), Bhad Bhabie and her prompters parrot popular internet rap music. Take the insipid “Juice”, where not only the ‘bitch’ count is high and the blaccent thick, there’s also the disturbing threat “I beat the braids off that bitch” while YG’s characterization of prospective sexual partners could be construed as describing minors, simply a poor choice given the context of his guest verse. And “Affiliated”, which at least tries to explain the artist’s belligerent frame of mind (including the rare concrete reference to the streets she allegedly “graduated” from: “This how Boynton raised me”), shoots itself in the foot with the titular gang language.

As a rapper, no matter how irrational your venture, you have to be able to score at least some points in your presentation. The rap debutante starts off ambitiously with “15 (Intro)” and its opening salvo “My 15 minutes [of fame] stretchin’ some hours late / Bring me 15 bitches, I make ’em salivate”. She packs some potent retorts with “They watchin’ the kid like a nanny / I’m cookin’ that shit that gon’ get me a Grammy” (“Count It”) or “Wanted me to stay up in a child’s place / But I just put the down payment on my own place” (“Famous”). She’s on a learning curve, making plans, learning to deal with fame (“Wanna love me cause I’m famous / wanna try me cause I’m famous”), fending off detractors (by name: radio personality Charlemagne Tha God), and even addressing her temperamental issues. Plus the music that she makes, taken by itself, is not all the way bad. “Gucci Flip Flops” is playfully ominous, “Count It” doesn’t even have to turn up the gunshots all the way to ear-shattering to sound menacingly, and “Famous” is a most delicate trap variant with floating somethings that might or not be flutes. There’s even some expressive moments to take off the edges like “No More Love” and “Trust Me” (with Ty Dolla $ign).

All this is largely forseeable, including the final moment of truth, “Bhad Bhabie Story (Outro)”, which contains everything from age-appropriate advice like “Don’t believe everything you see on the internet” to an Eminem reference. Calculated it may be, but it’s still a necessary reality check for everyone present. If rap is a controversial act of emancipation (at least for a teenage girl), this matter-of-fact monologue is the conservative one, where Bregoli reclaims authorship over her story. All these hoes laughing like something funny (to quote her 13-year old viral self) should take a listen at least at this point.

I believe the days are gone when you could easily blast the audacity with which celebrities big and small take up rap careers. And with grown men available giving into the urge, I see no reason to pick on a teenage girl. In order not to victimize her I will also refrain from calling out the people behind her. Call me idealistic, but I give each and every rapper the benefit of the doubt. Any idiot can gain a following on social media, but when such attention is parlayed into an actual rap project, I consider that a productive and even potentially constructive pact. There are worse ways to monetize ‘being someone’ on the internet. As a rapper you will always have some degree of individuality and independence, or at the very least the appearance thereof. Culturally, “15” walks right into the traps that were laid out before it. But on her level of responsibility, at this moment, that’s largely due to her not being given enough time to learn the basics of rap, which, as everyone should know, go beyond mere technical aspects. Ultimately both Bhad Bhabie and rap can take the credit that she still manages to notch a win for herself – if not necessarily for rap. And that’s why “15” may be quickly forgiven but will also be quickly forgotten.