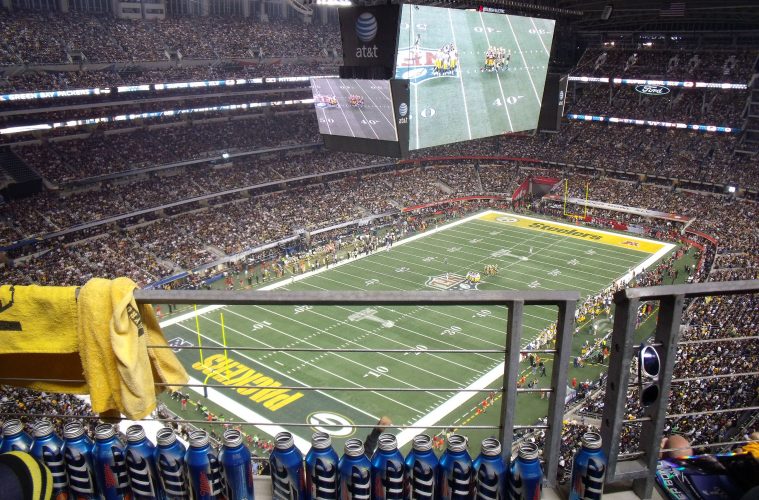 The Rams, the Patriots and the ‘Big Game’

In a little under a week on February 3rd, 2019 over one hundred million homes in the United States alone will tune in to watch Super Bowl LIII (53) on CBS. It’s an annual tradition that is almost a holiday in theory and certainly in practice. Even people who have virtually no interest in the NFL during the regular season will stop what they are doing for a few hours on a Sunday to see all of the spectacle. Host cities spend multi-millions to accommodate the event, and this year’s host city Atlanta is no exception. Tens of thousands of New England Patriots and Los Angeles Rams fans will flock to the city, many with tickets to the “Big Game” and even more without who just want to be part of the frivolity. It’s a carnival of food, fun and “FOOTBALL!!!”

It’s hard not to get sucked into the maelstrom, though my friends and I have invented our own annual tradition we call the Sushi Bowl. It’s exactly what it sounds like and not the least bit complicated — we get a bunch of sushi and we eat a bunch of sushi. There’s usually a bit of beer and sake involved, some interesting “I dare you to eat this” foods, and a lot of time between plates spent watching anime and playing video games. Honestly the fact I can get together with my buds is more meaningful to me than the food OR the football. We take the whole weekend and make it our own.

This year perhaps more than any other in recent memory I have “no dog in the hunt” as far as who wins the game on Sunday night. My beloved Chicago Bears were knocked out by a “double doink” field goal gone awry. After they fell to the wayside I joined camp with the New Orleans Saints fandom to see if Drew Brees could keep up the torrential pace he set this season, but a blown pass interference call knocked THEM out of contention as well. I have no lover for Tom Brady and never have, though I will (reluctantly) acknowledge that he’s the greatest quarterback in modern times and PERHAPS NFL history. I’ll cheer for the Rams by default but have no vested interest in the winner either way.

One of the things I enjoy most about this time of year is actually watching OLD Super Bowl highlights courtesy of NFL Films, particularly those featuring narration by John Facenda, or other announcers doing their best imitations OF him. Facenda was affectionately called “the voice of God” by football fans during his prime for his deep baritone and signature inflection of every syllable he spoke while recapping the on-field action. To say Facenda is to NFL Films what Howard Cosell was to Monday Night Football may if anything be an understatement. Combine that with the signature orchestral music that NFL Films use for their recaps and it’s a true joy to behold.

As much as I thrill to this time of year for the food and the fun surrounding the “Big Game” I recognize that this is a tradition that MAY not last. Much like any other physically punishing sport, concussions are both a short term AND a long term problem due to the lasting physical and mental impairment they can cause. While it’s self-serving of the NFL to say concussions were down 24% this season and pat themselves on the back for it, that nearly one quarter drop is down from what had to be considered an unsustainable amount of brain injuries — not that ANY amount should be considered sustainable. There’s already growing evidence that people under the age of 18 should be limited in the amount of full on collision contact they have in mixed martial arts, hockey, football, and even soccer. That makes it a bit difficult to create the future generations of players who will continue these football traditions.

As I do in my own job covering combat sports I’ve generally relied on the maxim “the athletes know the risks and choose to accept them” for whatever reason — the fame, the glory, the money to support their family and friends, or all of the above. I don’t have a hard time imagining a scenario though where society might ultimately decide that the risks aren’t worth the rewards even to those who would willingly take the risks. That would come with its own headaches though, pun most certainly not intended. I speak from experience when I say that unsanctioned MMA is far more dangerous than sanctioned MMA. You need trained athletes, trained referees and trained medical personnel there to ensure the safety of everyone involved. At the end of the day you can’t stop people from wanting to fight (go to any bar on a Saturday night and there’s a good chance you’ll see an “unsanctioned fight”) but at least in a sanctioned environment it can be stopped when someone’s health or life is at risk. Banning football would just create underground “unsanctioned” football with no one there to look after the athletes when they take serious concussive blows.

I’m not saying there isn’t an argument to make the sport safer or that the NFL hasn’t at least made an effort to make it so, even if it comes across like an answer to their critics and a protection of their bottom line rather than out of vested human interest in the welfare of their athletes. What I am saying is that while you enjoy your beer and nachos (or sushi and sake) this weekend, have a thought for the health and safety of 200-300+ pound men who crash into each other with the violence of car collisions. If you’re the praying type maybe say a prayer too for their well being. And if I can ask one favor of you, no matter which team you may be rooting for, don’t be “that fan” who screams and cheers when an opposing team’s player suffers a serious injury. Imagine if that was a friend, family member or loved one laying there on the field with a broken leg or a concussion. Every player is that to someone too.