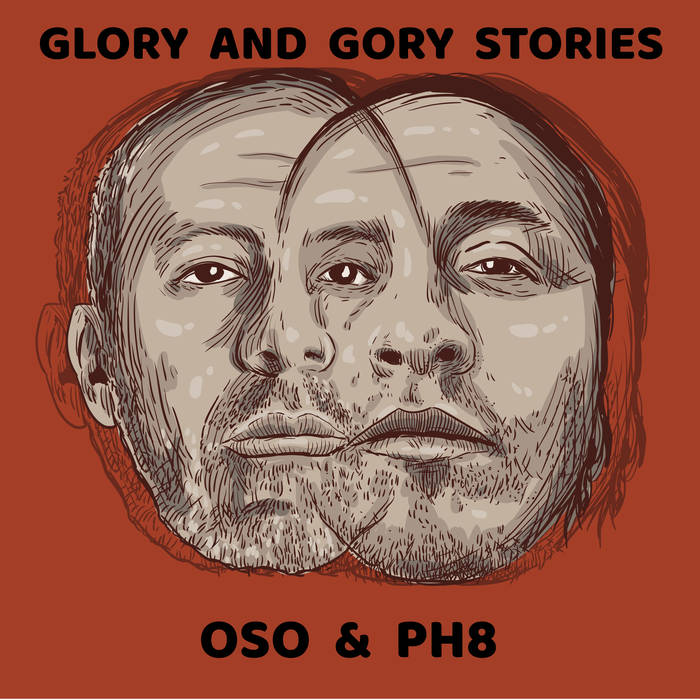 Oso Negro reached out to RR after our review of Gajah & Mute Speaker’s “Vent” CD. He was the featured guest artist on the song “Bottle In the Sea,” and since I neglected to mention that song in said review, I’m going to go ahead and share it with you now.

The Boise, Idaho born Oso has been busy with his own career since that time. He’s linked up with Pueblo, New Mexico producer PH8 to form a tag team for this seven track, 20 minute long release entitled “Glory and Gory Stories.” I choose the word “release” very purposefully because it feels like a LP to me. It’s a physically pressed disc, professionally mastered by Uncommon Nasa at Nasa Labs. Length-wise however it’s shorter than most “extended plays” you find today, and certainly far shorter than most free mixtapes you can download on the internet. Call it what you want — YMMV.

Even though it’s a self-distributed album, “Glory and Gory Stories” has the feel of a Rhymesayers release. “Trajectories” in particular strikes me as the kind of track you could hear Aesop Rock or Slug flowing over. PH8 provides a pleasant mixture of boom bap beats and soulful background samples while playing with distortion effects on Oso’s vocals. It’s too clear to be recorded over the day phone, but too dirty to be taken into a clean room where microchips are being made. It’s almost a cliche of the underground rap scene, but certainly not an unpleasant one to listen to.

Another of those cliches is tracks that are experimental and/or a bit weirder than you’d hear on commercial radio, and “It’s All Geometry” fits this category too. Oso Negro and PH8 both play with the speed of the beat and the speed of the lyrical flow, and the music itself feels like beats and samples were thrown in a blender set to puree. I realize this wouldn’t be everyone’s cup of tea (or “the butter (that) melt into her crumpet” as Oso raps) but in the context of this album it works.

Oso’s vocal tone actually reminds me of Chicago more than Boise, which is doubly odd given that he just recently moved to Florida. It goes to show you can’t necessarily identify someone by their flow all of the time, nor can you peg a style to them based on where they come from OR where they live. “Sirens” breaks the mold by having a Caribbean swing and mellow melody which even features Oso singing on the hook. I wouldn’t mind if he dropped a few more tracks like this if he avoids the high notes. It honestly fades out before I’ve heard as much as I want.

In fact my biggest takeaway from “Glory and Gory Stories” is that after only 20 minutes I really haven’t heard as much of Oso Negro as I want, which is why it’s worthwhile to include another track he’s been featured on in this review. Oso Negro is a fair to above average storyteller with good breath control and an inoffensive delivery. I can’t say any single lyric struck me as “dopest rhyme of the year” material but neither was I bombarded with anything absurdly simplistic or ridiculously misogynistic or xenophobic. Oso Negro & PH8 serve as another reminder that there is good independent hip-hop being made if you take the time to look around for it.