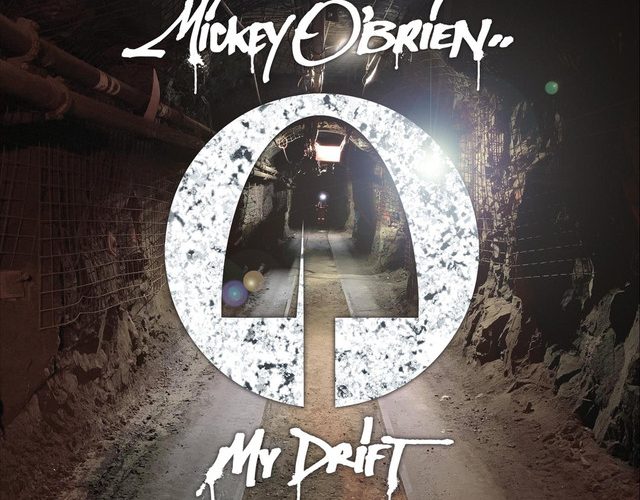 It’s that time again — time to review a Canadian rap album released by Hand’Solo Records. The irony is that Mickey O’Brien’s “My Drift” would have been a great album to review for St. Patrick’s Day, but I didn’t get it until two days AFTER March 17th. The album opens with the song of the same name, and the hook sounds exactly like what you’d sing at the bar after you’ve had a pint or two (or two too many) with a bunch of rowdy and fun Irishmen.

From there the album settles into a more traditional hip-hop format, with the boom bap banger “Beg Borrow Steal” which opens with samples of Busta Rhymes’ crooning from the opening of the “Woo-Hah!” remix. The head bopping beats are no surprise given that Fresh Kils produced Mickey’s album, but it’s the lyrics of the Copper Cliff, Ontario born O’Brien that are the eye opener. For my first time reviewing him he’s not only highly polished but drops some lines that really wake you up — pun intended.

“My art mimics life, but my life mimics my art
Where do I start? This is more than a coincidence
So constantly my consciousness questions my confidence
Coulda, shoulda, woulda, man these people so vicious
Bobby f—in Brown, it’s +My Prerogative+
My only advice is to learn, love, live, forgive
If you were really woke
You’d throw your cellphone in the trash and speed the f–k off Facebook”

Mickey’s publicist describes him in his bio as “a hard rock miner by day” noting that he LITERALLY explores the underground. Perhaps that also accounts for the gritty smoky sound of O’Brien’s flow, but amazingly that lends itself well to creating a uniquely pleasant vocal tone. Mickey combines rhymes that he clearly put thought into before recording them with a self-deprecating humor and a general sense of anxiety about the future of both hip-hop music and human existence as a whole. This all comes to a head on the lead single and video “Groundhog Day”.

As you might expect from a Hand’Solo (or URBNET) Records release, the featured guests are also by and large Canadian. I’m certainly not going to be the person to knock a feature from D-Sisive on “Terminally Unique” or The Mighty Rhino on “Listen” because these are both artists you should go out of your way to listen to more of. Rhino’s message on the latter is particularly inspirational and not in any kind of cornball cliche way — he genuinely wants those who are hurting to feel better and fight the good fight.

There’s so much to like on “My Drift” that it’s actually hard to single individual items out to highlight. O’Brien and Kils aren’t afraid to push the album in directions that other hip-hop emcees wouldn’t go. “Don’t Be Like Them” featuring Nadia Costanzo is a mashup of hard rock and top 40 urban pop. “Parasite” featuring Jor’Del Downz has an ominous layering of piano samples and a story befitting of the song’s title. “Vedder Than You” immediately wins me over with Uncle Fester’s scratching and samples of the late Ol’ Dirty Bastard and Guru. Wherever you turn this album has good surprises.

One more note from Mickey’s publicist before my final summation — he describes O’Brien’s album as “hard-hitting raps that touch on class struggle, love & loss, and the daily trials of life”. From some people I’d find that statement a little bold if not outright pretentious, but from a man who literally digs in the dirt by day and still has the inspiration to drop bars like this at night, he’s got an authenticity to his lyricism and flow that’s hard to knock. By partnering with one of the most underrated producers in the game in Fresh Kils, Mickey O’Brien’s “My Drift” is a certified hit.