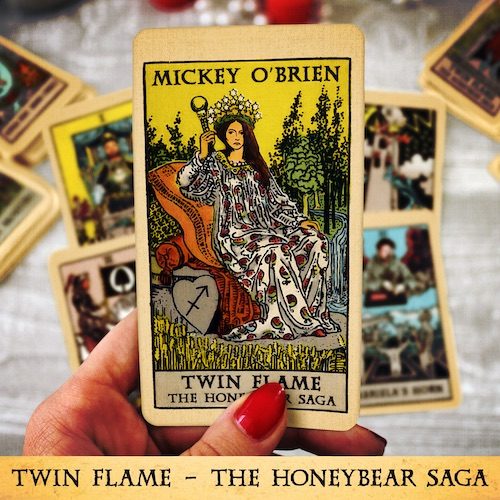 We previously checked out Mickey O’Brien in 2019 with his full length album “My Drift“. The Sudbury, Ontario, Canada native has returned in 2020 with the much shorter (22 minutes) long “Twin Flame – The Honey Bear Saga” but that’s no reason to not be excited. As with the last project acclaimed producer Fresh Kils is on board to provide all of the beats for O’Brien’s rhymes, so the GZA motto “keep it half short and twice strong” might be the perfect way to describe the plan from both men here.

True to the title this EP release is in fact a “SAGA”, with O’Brien telling a tale of a relationship gone bad. On “Tower” you can tell things are all kinds of fucked. “For once, remove the mask! Show your true beautiful self, forget the past. Let go of the hurt, let go of the trauma/let go of the violence, forgive yourself, I’m not your father!” Unfortunately she can’t do that so he “break(s) the funk out.” It’s depressing to see that she couldn’t love herself or her significant other but just like a sad movie, you can’t tear your eyes away.

Things don’t get any better on “The Perfect Storm” though as O’Brien admits he’s just as much at fault because “that pussy’s like heroin” and he can’t quit the “Break Ups 2 Make Up” cycle (word to Method Man and D’Angelo). Even though O’Brien chides her because “you’re supposed to grow and level up” it’s clear that it takes two to tango. His inability to walk away from a toxic relationship proves that no matter how much experience he’s gained he’s not leveling up either.

There’s a dope switch of beat and flow before the end of the song though that implies musically and literally that change is possible for O’Brien. That leads beautifully into “Gabriel’s Horn” where jazzy ivories meet a scratched in hook asking “Can we please have a moment of truth?” O’Brien both croons and raps on this one before frankly stating “Let’s start the next chapter of the saga.” The lack of facade is what makes the story so compelling here. He’s put together a book of rhymes to show love won, lost, and fought for over and over as they “play each other like chess” trying to win — not realizing they could BOTH win if they stopped looking to score points with an unseen trio of judges scoring each round.

I don’t want to spoil the rest of the story for you by going note for note through the last two tracks — I just want to tell you that “The Honey Bear Saga” lives up to its name by being a romance novel and a rap album all rolled up into a big fat blunt. If that’s not your high then cool, I get it, but as for me I want the smoke. Mickey O’Brien’s not a rapper willing to settle in his rhymes or his relationships as raps for his girl that “your intelligence is the sexiest thing I ever seen you wear out” — and that kind of admiration makes you want to root for O’Brien and “Sophia” to succeed. Do they? Hush sweetie, spoilers.