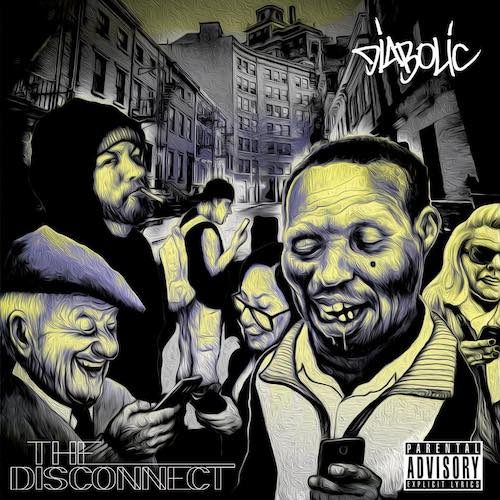 Since his 2010 release, “Liar and a Thief“, the aggressive Long Island rapper known as Diabolic has been showcasing the exact kind of emcee he is: The battling kind. While not an angry rapper, he is most certainly hard-hitting. When attacking a song or track, the man is armed-to-the-teeth with belligerent lyrical weapons loaded with ammunition so heavily laced with clever references, cutting wit, and an unpredictability in rhyme schemes that listeners have to rewind his verses a few times just be sure they caught all of it.

Diabolic’s sophomore album, “Fightin’ Words”, was one of hip-hop’s strongest releases of 2014. Though complete with complex rhymes and urban sounds characteristic of a New York battle rap album, it was also sprinkled with insightful dabs about American history, politics, and social commentary. Five years have gone by, but he’s kept himself busy by providing guest verses for the Snowgoons, Apathy, and being a centerpiece in several of the Grind Mode Cyphers. “Collusion”, his joint record with Phoenixville, PA producer Vanderslice, was released in April, however it’s been his third solo album, “The Disconnect”, that’s had its cover touted since late 2017 with feverish anticipation. Despite the year-and-a-half wait, it was worth it. He’s kind of eased back on the battle raps on this album and has chosen to deliver several narrative songs. But no matter the topic, one of Diabolic’s strengths is keeping his raps interesting by playing hop-scotch through bars with his polysyllabic rhymes.

While the album cover depicts a painting of several people, except for ‘Bolic himself, as drooling, moronic zombies happily addicted to their smartphones, the album isn’t necessarily a commentary about humanity’s growing tech-induced detachment from reality. As stated earlier, ‘Bolic includes more narrative, storytelling tracks this time around and they stand as a departure from his usual metaphor-laden verses.

Case-in-point, the album’s second single, “The Story”. Produced by B.P. (who laced the beats for half of the album), Diabolic reminisces about his youth over a soulful urban groove. In three verses, he gives the listener an account of his younger self’s discovery of hip-hop in New York City of the ’90s. What’s interesting about this track is the level of detail he includes, from fashion trends of Tommy Hilfiger, Karl Kani and Nautica to the music references of Wu-Tang, Heltah Skeltah, and even the Jerky Boys. Continuing the theme is “Pyrex”, which is like an all-access pass into the mindset and origin of Diabolic as a rapper. The B.P.-laced beat is one of menacing dusty boom-bap, allowing ‘Bolic to spin lyrical yarns about how he became the threat on the mic that he is.

With “Collide”, the marching band drum patterns that the beat takes in certain parts is dope. The stress of his domestic life takes center stage in the song, but it feels like a sequel to his 2014 track “Bad Dream”, in which he also rapped about his trouble with his children’s mothers and his frustrations over it. B.P. provides a pretty dark beat on “Holy War”. A highly pensive track similar to songs like “The Convo” by DMX, “Death” by Cam’Ron, or “A Talk With Jesus” by Copywrite, Diabolic injects his own brand of black humor in the spiritual conversation by adding a chat with Lucifer in the second verse (the line where he threatens to have ‘Bolic “trampled by a race of overweight swollen apes who’ll run your nuts over wearin’ roller-skates” was imaginatively ill) and a surprise ending. His list of guest stars is surprisingly small. Singer Maggie Burns provides the hooks on both “Fable” and “Dirty”, while Tones and Taboo are the sole guest rappers. His sense of humor about his life shines through on the Evil Genius-produced “What I Want”, with the cartoonish beat providing a good backdrop for ‘Bolic to drop some tongue-in-cheek lyrics about what he likes.

If there’s any track on the album that’s in-line with the album title, then it’s “Enough”, a three-verse narrative about a good girl named Josephine who gets turned out and the effects that her transformation has on those around her. As the song indicates, the story isn’t connected to ‘Bolic, it was just news he came across on his phone and he decided to write on it. One line in the song (“enough to make a man go crazy, numb to it ’cause of everything I’m seein’ lately”) is what encapsulates the theme of disconnection. “Roundhouse” has thumping drum beats and animated horns, a “Billy Jack” (1971) dialogue sample to start it off, and features Taboo who spits a verse of Cappadonna “Winter Warz” length. ‘Bolic himself lends a hand behind the boards with Engineer on “Buddy Lembeck”, and the title feels like a page out of Action Bronson’s book: Taking a character from the bowels of pop cultural obscurity and giving them some new (albeit transitory) relevance as a hip-hop song title.

“Lumberjack” was the last of the three singles released prior to the album dropping. While Nightwalker laces a slow, almost syrupy beat, it doesn’t really go with Diabolic’s hardcore style. It’s the very first single, “Marvel”, that’s garnered the most attention. Though it bears similarities to “Secret Wars Part 1” by The Last Emperor, this isn’t a lyrical version of what would happen if you pit rappers against comic characters. “Marvel” is what happens when Diabolic makes clever references to Marvel characters utilizing layered metaphors and jaw-dropping wordplay (“All I need is a bag of weed and I spaz / Burning +Mary Jane+ like Spider-Man’s penis with crabs” DAMN!). What’s even more amazing is that he stayed on topic over Shaolin Beats’ production the whole time:

Though Diabolic takes shots at Talib Kweli stemming from their 2016 Twitter beef and subtle jabs at former friend Immortal Technique, “The Disconnect” is hardcore NYC hip-hop lyricism and production through-and-through. The title evokes connotations of being untethered, a theme pervasive in the Jordan Peele horror film “Us”. While I won’t make any deep comparisons between the film and this album, I WILL say that a disconnect implies being unfettered. In such a state, anything’s possible. His alluded conflicts with former label Viper Records notwithstanding, Diabolic isn’t an emcee wrapped in restraint. That’s part and parcel what makes him a gifted rhymer with continued replay value. As he stated on the eighth track, he does “What I Want”.