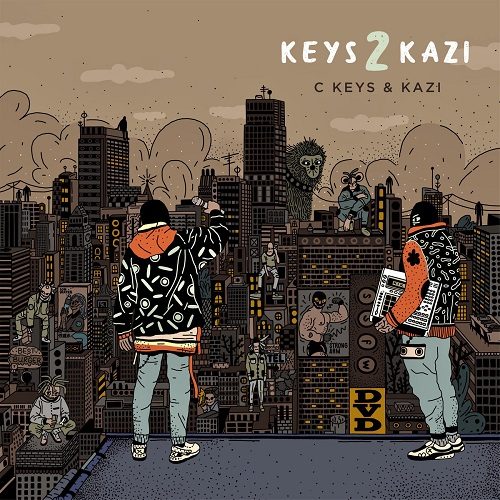 Steve recently uncovered the lost gem “Blackmarket Seminar” from Oxnard (California) artist Kazi, who snapped up Madlib before he became the most in-demand producer in hip hop. It’s a great little record, sounding decidedly modern given it was assembled in 1996, but Kazi has also released new music in 2019. Madlib’s collaborators tend to have unique voices – Freddie Gibbs, MF Doom and Guilty Simpson all boast an immediately identifiable presence. So where does that leave Kazi? “Keys 2 Kazi” is a curveball in that respect, as while he’s perfectly capable of holding down an album, Kazi steps behind the boards for this record. And you know what? He’s really talented.

“The Streets” connects effectively, thumping bass driving home the cut-throat nature of the lyrics as Kazi and Hexsagon share their survival tactics. The decision to include vocals overlaid on the hook isn’t so satisfying but does grow with repeated listens. Detroit’s Guilty Simpson appears on “W.Y.M.” (Watch Your Mouth), a cut-and-paste duet consisting of mostly braggadocious lines like “You’ll have a horse head in your bed, and it ain’t My Little Pony” but it is undeniably enjoyable for what it is.

The sampled crisp snares are a common trait in Kazi’s production, elevating “Barburyem” and “To Whom It May Concern”, but “The Drive Home” operates on a different frequency to the rest of the album. Two minutes long, and printed as “The Drive Home Home” on the CD, I wouldn’t be surprised if Kazi stole this from the Jaylib recording sessions. It’s utter filth.

C. Keys combines the battle raps of Cymarshall Law and the introspection of Trek Life, sitting sonically somewhere between both. While Kazi does jump on the mic for a few tracks, it is his production (not the ten skits) that impresses. A knack for memorable melody and killer bass lines, the influence of Madlib, Oh No and even J Dilla, is evident throughout, yet never sounds copycat.