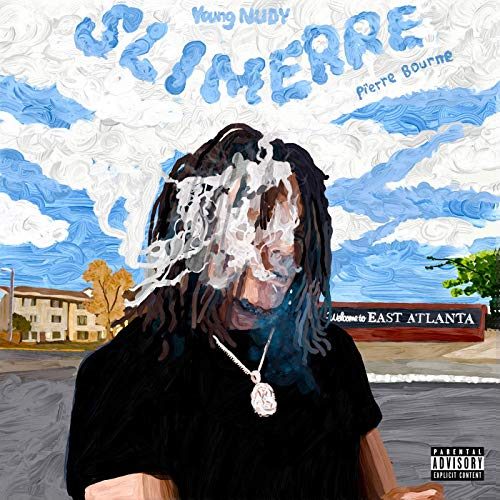 “Young Flash” here to talk about Quantavious Tavario Thomas b/k/a Young Nudy. The East Atlanta rapper has been in the news lately for reasons other than his music. His cousin 21 Savage was detained by ICE after both were arrested in February on charges of aggravated assault in DeKalb County. Both ultimately got out on bail, but questions still linger about whether or not 21 will ultimately be deported. That hasn’t stopped the two from working together on Nudy’s latest album “Sli’merre“, an album whose title is a portmanteau of Nudy’s “Slimeball” mixtapes and rapper/producer Pi’erre Bourne. Two tracks in they’re rapping together on “Mister”.

Owing to the fact I don’t have a physical copy I can only guess that Pi’erre produced most (if not all) of the tracks since he gets co-collaborator credit. If so I’ll give him props for the track here. It’s a light, whistling, relaxing beat which has almost nothing to do with the artists declaring themselves “Mister Trap House, Mister Dope Boy, Mister Slimeball” and so on. That’s typical for this album. “Sunflower Seeds” was one of the first hits that came up when I searched for this album and while the name might have you thinking of Swae Lee x Post Malone, it’s actually WAY more mellow.

It wasn’t until I got to “Shotta” featuring Megan Thee Stallion that I started to hear some darkness and menacing overtones to a Nudy track. Megan has been blowing up lately so I’m surprised she wasn’t put on one of the more pop friendly beats, but she certainly plays her role on the song: “That street s#%t make me wet/Ooh, bae go get that check/Ya, niggaz wanna smoke with me?/What, bae go get that Tec”.

Most of Young Nudy’s output sounds interchangeable with Migos‘ output musically, lyrically and topically. “Black Hippie, White Hipster” could easily be mistaken for a bonus track from their catalogue — he’s rapping about trapping, he’s using the “beat, word, rap a few words, pause, start, rap a few more words” cadence they so often do, and he’s equally unapologetic about the hustle it took to get where he is. It shouldn’t come as any surprise then that one of their most popular collaborators in Lil Uzi Vert also features on Nudy’s track “Extendo”.

If I completely numb my brain and just listen to the bass, beat and melody it’s a fine track. Paying attention too closely will cause a migraine. Words that don’t exist are invented to rhyme with words that do just to make the song work — “extendo” because “you pretendo” so they can “play with you like Nintendo”. That’s some A+ level commitment to making s#%t work that really shouldn’t, but that kind of effort should have been put into making better quality rhymes.

That’s where we stand with “Sli’merre” as a whole. It’s not a bad album, nor is it a classic album, but it’s entirely a typical album. It’s the perfect slice of the Atlanta rap scene in 2019 for all its good and not-so-good qualities. I don’t find Young Nudy to be more or less qualified to do what he does than any of his other contemporaries, but the biggest deficit to “Sli’merre” is that I just don’t hear the kind of catchy imitable hits that artists like Migos make on this album. The potential is there but the songs largely blend together into a mostly forgettable effort with a few isolated bright spots.