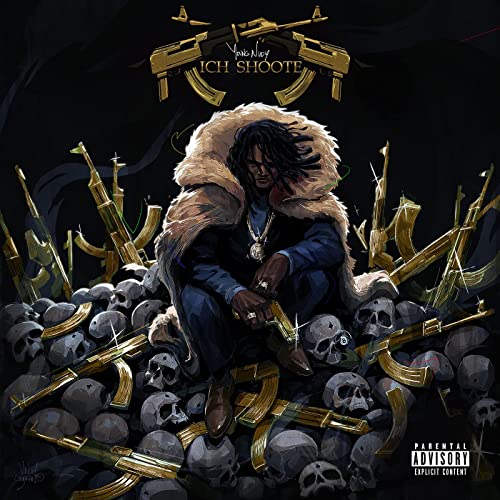 If you don’t know Young Nudy (Quantavious Tavario Thomas) from his own music, then you may know him from being arrested along with 21 Savage back in 2019. He was released on $100,000 bond and legally speaking has had a relatively low profile ever since. Musically speaking though he’s been busier than ever as “Rich Shooter” is his second album of 2021 following “Dr. Ev4l” just a few months ago. True to his Atlanta roots he’s got Future on “Trap Shit,” one of the fastest to blow up tracks from his latest release.

The “Rich Shooter” album is so new he hasn’t even shot any music videos for it yet, although he’s busy with the “Rich Shooter vs. Dr. Ev4l” tour, so he may not have any time to do so for a while. The most profound Young Nudy gets on the song “I got ice on my chain/touchin the chain, we touchin your brain” and “you is a hoe and yo’ partner’s a hoe.” At least it’s fairly indicative of Young Nudy’s style as a whole. Pitch corrected vocals, excessive threats (“I got my steel, keep my steel, ain’t scared to squeeze on no nigga”) and conspicuous consumption are the order of the day on “How They Label Me.”

“I’m tryin to catch a nigga slippin, he got something we want, we take.” It’s a literal non-stop barrage of posturing about how “real” Young Nudy is and how “fake” or “soft” or “pussy” everyone else is. I suppose it’s to Nudy’s benefit that he keeps these feelings on record instead of on the streets or he’d wind up facing more charges before long. Is he apologetic about his relentless negativity? HELL NAH. “I Can’t Change” may be about how many women he wants to sleep with, but it sums up his attitude on the whole. Honestly I respect that about Young Nudy’s persona on record. If you’re going to be a heel, be completely ruthless and savage (no pun intended). Don’t show mercy or weakness, and always be out for number one.

It’s appropriate that the album ends on “Fish Scale” with Gucci Mane, the original unapologetic heel of the Atlanta rap scene, and a man who has faced far more charges (fairly or unfairly) and jail time than just about anybody in the A-T-L. “The hood gon’ treat you like a vet where I’m from” raps Nudy, and Gucci has certainly paid enough dues to get that respect.

That doesn’t really make him a role model or a man worth emulating, and Young Nudy certainly isn’t either, but since when are we asking rappers to be role models anyway? I don’t mind if some are, and I wouldn’t be upset if more were, but listeners are going to live vicariously through the exploits of artists who drink, smoke, and fuck too much regardless of how upsetting some people might find their words. It’s just more dangerous to some racist ass conservatives because it’s a young black male living well and selling music to their WASP kids.

On the one hand I’m saying “fuck the haters Young Nudy, live your best life.” On the other I’m saying “Rich Shooter” doesn’t exactly make me a fan. At best I can say I understand why he’s succeeding. The production is as slick as fish grease, his musical lyrical delivery is the predominant style of the last half decade+, and he’s well connected on the scene thanks to his cousin 21 Savage and the successful Atlanta rap empire. I wish I enjoyed “Rich Shooter” more. I don’t hate it, but I don’t think it adds anything new to the conversation, because there are so many rappers saying and doing the exact same things Nudy does. If you like interchangeable trap rappers who have swagger for days, Young Nudy is your man.