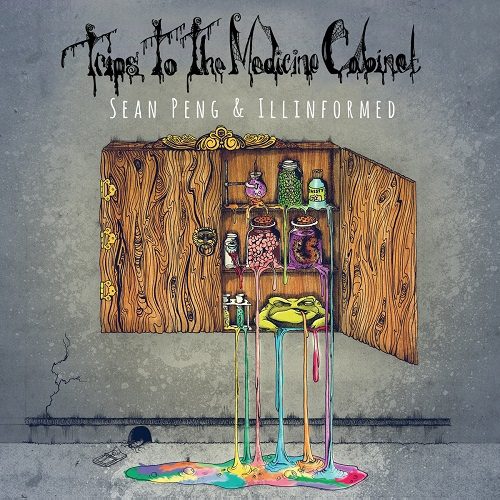 What has Illinformed been up to since we first inhaled the spores of his “Mould Tape” in 2015? I count eight full-lengths entirely produced by the man. Not to forget more exclusive beat placements like those on Reef the Lost Cauze’s latest. “Trips to the Medicine Cabinet” reunites two thirds of Creatures of Habit, where Sean Peng shares the mic with Ill’s brother Eric The Red.

Artists at that level are refreshingly anonymous, compared to their more famous contemporaries. Both appear to be in their twenties, Sean Peng seems to be from Bristol and Illinformed should be based London, but don’t be surprised when search results on the latter include a London mayor correcting an “ill-informed” American president and guests of a coffee shop chain complaining about a “very ill-informed and impatient” staff. If Illinformed’s name is the opposite of well-informed, it’s because that vintage hip-hop ‘ill’ informs his work. In other words, he’s sick with the beats.

With “Trips to the Medicine Cabinet”, he reaches into the Creatures of Habit compartment where light and nimble beats wait for Sean Peng to hop aboard and surf around town with. It’s a proven combo. What’s a bit weird is that on the first track Sean proclaims, “We only rock on beats that bang real hard” when in fact Illinformed’s beats here don’t really bang all that hard. These are mostly delicate designs that would be crushed by vocally sturdier rappers (who seem to be all but extinct, sadly).

Nevertheless the characteristics of the duo grant us a number of entertaining moments. The album is off to a promising start with “Danka Sean”, marked by jittery xylophones and cuts by DJ Buzzword sliding in and out just at the right instances. There is not an overabundance of vocal samples on “Medicine Cabinet”, but the few times a DJ flicks his wrist, the cuts liven up the joints. As far as his source material goes, Illinformed doesn’t limit himself to the two standard options – strings or pianos – less resourceful boom bap beatmakers always seem to be faced with. And when he does pick either one of those, they’re not always readily discernible (“Elixer”). With its clanking chimes, “Humming” comes closest to the aesthetics of free-form ’90s rap (while the viscous “Rotten Seeds” and the cut-driven neck rub “Paradigm” are almost too archetypical). “Bug House” is centered around opera vocals and “Bitter Sweet” around a wailing soul sample, “Green God” is classic boom bap informed by classical instrumentation, and for those who think today’s version of the genre neither has enough boom nor bap, “Continuum” kicks up more dust with its heavyweight drums. Maybe Sean Peng has this reunion with his erstwhile crew NLP in mind when he claims, “Bangin’ beats in the basement / got the neighbours complainin’ about the noise that we’re makin'”, because he couldn’t possibly be talking about the percolating piano and swishing drums of “Third Eye”.

Speaking of the project’s MC, Sean Peng shouldn’t be mistaken for a bloke who sees the world exclusively through the lens of mind-altering substances, in fact seeing the consequences of such substances (and chemicals in general) has a sobering effect on him. On “Dr. Doctor” he vehemently voices his distrust in anything but cannabis (whose impact on public health will never be just entirely positive either). “It’s a devastatin’ situation / to see your friends facin’ / procrastination and drug fascinations” is a statement not heard every day on rap records. Peng also promotes a traditional work ethic, especially because he may be familiar with the other side: “It’s the sofa-surfin’, doja-burnin’ loner wordsmith / Clothesline throats when I quote the sermon (…) You won’t get any props if you’re not puttin’ the work in”. All play and no work makes Jack a dull rapper, is what he seems to say.

In the following “Elixer” he links the fact that he turned his life around directly with picking up a mic. It seems Sean Peng wants to leave the listener with a few words of wisdom. He may not rap ecologically and emission-free yet but he’s aware of the polluted environment (perhaps also in a figurative way), pointing to “acid rain and pesticides”, adding warningly, “And don’t say you couldn’t see the signs”. And while he may deem his own aura as not pure and radiant enough, “Bitter Sweet” with Life MC sounds like he told the veteran to spit the most positive verse possible for this one.

Sean Peng is an artist who honestly tries to make sense of it all, to “find a meaning to the plot” as he puts it, even though it proves difficult. The majority of the songs don’t last longer than two verses, mirroring his uncertain aspirations (something along the lines of “tryina live happily”). It’s up to the listener to decide if songs like “Cryostasis” make sense to them. Peng’s rhyming literacy prevents him from going where his mind will take him, to wit, off track. His performance is not devoid of lyrical clichés and rhetorical self-sabotage, but with the help of Illinformed’s never banal beats he reaches the level of authority that justifies his first leading role on an album.