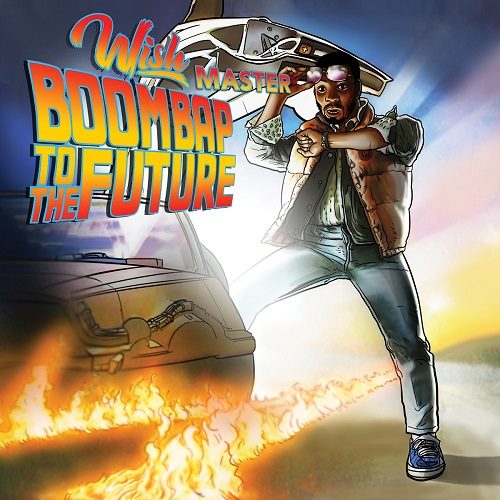 Wish Master :: Boombap to the Future

Wish Master sounds like the name of a metal band, but this here master of wishes is quite likely more the headnodder than the headbanger type. “Boombap to the Future” is the name of the Bristolian’s full-length debut, which makes him a coincidental compadre of international, London-based conglomerate Sons of Boombap, who, also accompanied by ‘Back to the Future’-inspired artwork, put out two volumes of “The Past Is the Future” in 2016.

The message, it seems, is that the key to the future lies in the past. Apart from the fact that the argument unwittingly acknowledges that ‘boom bap’ is a thing of the past, generally speaking it reveals a rather conservative frame of mind.
And given that conservatives prefer to dwell on what’s been rather than what’s to come, how does the future fit in here? Turns out, Wish approaches the concept rather undogmatically, spending equal time on past, present and future. On opener “Destroy and Rebuild” he ponders that “life’s just a cycle” yet still insists on making progress. Which is not easy in these times, as he explains in the following “The Big Oppression”, when not much is left after rent, taxes and “saving for the pension”. These concerns of the European middle class currently move the political climate to the right, and by turning the historic phrase ‘the great depression’ into ‘the big oppression’, Wish Master himself provides his deliberations with a distinct political overtone and even claims to unveil “the reason why we’re so aggressive”.

Before we start to read too much into an unsuspecting local rapper’s retail debut, what can be said with certainty is that Wish Master strives to be in control of his own destiny. He motivates “Children of the Ghetto” to do the same in “I Can” fashion and on “The Big Oppression” declares that he sees himself as a captain rather than a mere passenger. As a rapper, Wish Master is the thoughtful type, but what really stands out about him is that he talks to the listener rather directly. Still this is the Master’s show, a point he gets across a polished flow on “Jupiter”:

“I’m from a place where options are minimal
Postcodes and flags got the ends all political
People need upliftin’, dark clouds and they miserable
I’m tryina leave a legacy, so I could have residuals
It’s such a digital world I’m livin’ in, but I’m spiritual
Spiritually enhance and advance into my physical
I put my pen to practice through the mic and now I’m lyrical
And some say I’m technical but I say I’m original
Some say unorthodox but I say individual
The missing piece of the puzzle, so that means I be critical”

Here and there he dwells on the obvious and the choice of words doesn’t always seem entirely natural, but ultimately Wish Master simply takes time to make his arguments. Take “Grinding”, where a pedestrian opening like “You don’t need Twitter to follow me” sets up a deeper reasoning:

“It’s best that you study me, rather than copy me
Cause that there will make you only look like a mockery
Life’s hypothesis, call me Socrates
So better know that I create my own philosophy”

It’s not surprising that “Boombap to the Future” is anything but spectacular. Main producer Baileys Brown initially revisits the Justus League brand of beatmaking but is also capable of emotionally more committed tracks. Real bangers are absent, while the only evident clanger is “North East to South West” sounding like sample-free homemade hip-hop from the 2000s. When tracks start out simple, they quickly grow in density. “Jupiter” takes you on a nocturnal journey, “Science” on a mystic trip and “Motive” would easily fit into the High Focus Records catalog. It’s easy for Wish Master to criticize contemporary rap (“Games Gone Weak”: “No one’s teachin’ a lesson / and no one’s sendin’ a message”), as it is for everybody else, but he also offers a valid alternative, perhaps not with unremarkable tracks like the Simiah-produced pair that closes the album, but with the superior “Sometimes”, which features the heartfelt confession “I don’t do this cause I’m black, I do this cause it’s f–kin’ life (…) Hip-Hop keepin’ me alive, I’m hip-hop till I f–kin’ die”.

So how do future and past exactly interact, according to the Wish Master? He makes an interesting observation in the course of cautionary tale “Billy”: “Tell stories through my rhymes, so they live on”. Although this album doesn’t establish him as an elite storyteller, this is a wonderfully simple instruction how you can preserve the past for the future.