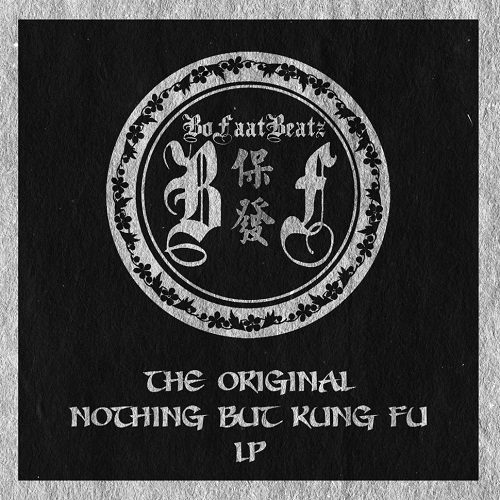 BoFaatBeatz :: The Original Nothing But Kung Fu LP

If I see something called ‘The Original Whatever LP’ on a label specialized in making available the ignored and the overlooked, I’m going to assume I will be presented with a lost gem from a glorious past, perhaps the director’s cut of a cult classic or some similar super nerdy rap ish. So what is “The Original Nothing But Kung Fu LP”? To get an answer we may have to rephrase the question: What is the other “Nothing But Kung Fu” LP that’s ostensibly not the original one? It’s a 22-track release that dates from April this year with beats by BoFaatBeatz and verses from Rock Mecca, Nine, Kwest Tha Madd Lad, Smoothe Da Hustler, Killarmy, and more. The allegedly original version followed a mere four months later.

Either we are dealing with a see-through marketing scheme or some forgetful gearhead who winds up with multiple versions of his beat tinkering. Be that as it may – “TONBKFLP” is a comparatively lean 14-tracker hosted by Hannover-based beatmaker BoFaatBeatz. Both “Kung Fu” LPs have 7 songs in common, all in assumed original form present here.

Nine and Smoothe Da Hustler meet again on “Bronx-Brooklyn Express”. The mid-’90s alumnis haven’t lost their individual passion, and you certainly couldn’t say that they phone it in. BoFaat however for some reason clips one of his samples so that it’s recognizably chipped, which could be the reason the beat was remodeled for the second edition.

First impressions are important why? Because they influence to no small degree ensuing opinions. The consequence of a less favorable first impression will be that I will be less forgiving of what follows, simple as that. On a mission to “Deflate Egotism”, Milwaukee MC Taiyano Denku comes out swinging with insults like he was trying out for the Demigodz, but he handles the mic rather clumsily and the drunken piano-pounding beat isn’t helpful either. If you sound like an uneven mixture of Esoteric and Vinnie Paz, you probably should refrain from random put-downs like “You got a cigarette-talkin’ voice like Miley Cyrus”.

As a longtime rap fan, I always make time for new names. As a matter of fact, they often possess more appeal to me than old acquaintances, particularly when it comes to producer projects, compilations, vintage mixtapes and such. Knucklez (a/k/a Bloody Knucklez) from Philly is such a new name, but “Trigga Breeze” being another blend of piano-sampling beatmaking and heavy-handed emceeing, does nothing for me, although the beat per se is certainly a much smoother ride than the one for “Deflate Egotism”.

Chicago representative Harry Fuche leaves a longer lasting impression, and not only for the fact that his song “Fallacy” appears twice on the disc. If Taiyano Denku is a poor man’s Thirstin Howl III, then Harry Fuche is a poor man’s Freddie Gibbs. The latter comparison is more flattering than the former, and Fuche’s bluesy undertone is especially effective on “Shots at Them”, which BoFaat equips with an almost UGK twang.

The producer also does a decent job with “Fallacy”, a backdrop that exudes innocence and calm. Harry Fuche continues to write his hustler’s diary (“All the dollars make sense / so from henceforth / I’m explorin’ how to get more”), but at the same time you only have to imagine Curren$y on the same beat and the modern touch he would be able to give the tune. “Fallacies” (same lyrics, different take, different beat) presents the same findings in a sneakier environment, offering valuable insight (for the remix-deprived modern audience anyway) into how important a beat can be in the overall impression a rap song creates.

But there should be a science to it. “Movements” (featuring Rock Mecca) could have passed through the hands of K-Def with its back-alley Blaxploitation groove, while the unexpected Cardi B scratches are something that you would probably not encounter on a K-Def beat. Still BoFaat’s beats tend to be simple, at worst simply the result of him feeding his sampler with uhm, samples. With drums strictly in supporting roles. You will also find examples of the kind of ho-hum underground hip-hop that by chance gets elevated by the vocalist (Kwest Tha Madd Lad on “S.O.I.L.”).

“The Original Nothing But Kung Fu LP” is the sort of album that makes you realize that if you’re drawn to this kind of sound, you listen to yesteryear’s music. This can’t and will never be current again. The project’s saving grace is the almost spiritual musical vibe shared by a number of tracks. Frequently the guests broadcast on the same wavelength, whether it’s Tennessee’s FeelPeepz delivering a street preacher sermon on “Variety Show” or veteran Aslaam Mahdi riding the “God Frequency” in older god fashion. Even a potentially more martial tune like “Fly Swordsman” (featuring Recognize Ali – the new Ali Vegas: everywhere, but going nowhere) is levitating above ground thanks to angelic voices.

Finally BoFaat picks up the mic after a longer hiatus himself under his rap moniker Egocentrik to state his mission. On “Old to Da New” he commits his preference for the ways of old to a lyric sheet. Admitting that it’s “way too late to be the new hype” but adding, “I truly don’t give a shit about what these dudes like”, he nevertheless hopes to contribute to a renaissance of traditional rap. “Let the old teach the new”, he suggests (notably with a British accent, for family reasons) even adding fire to his ire when he pledges to “purge this Earth from mumbling worms”.

BoFaat has more projects in the pipeline (or already released). A word to the wise would be to attain a higher profile not merely through proliferation. In conclusion, if you came here for the kung-fu references, they are as good as absent. If you came here to discover new – actual – talent, there’s nothing new to discover here. I’ve been critical of these medieval rap fairs hosted by German-Danish production team Snowgoons, but they usually have a good mixture of new and old and maintain a certain standard. In that light BoFaatBeatz’ “The Original Nothing But Kung Fu LP” is notably below the Snowgoons standard.