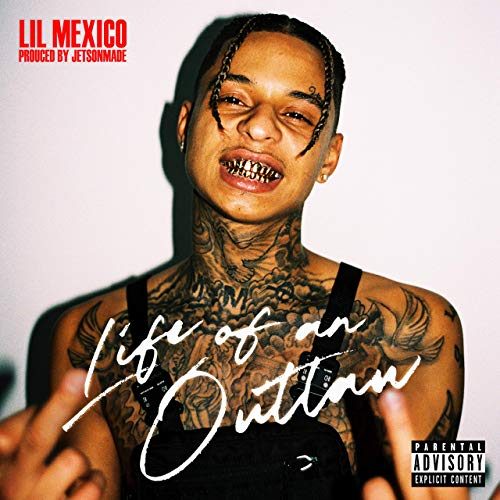 Life of an Outlaw

Lil Mexico :: Life of an Outlaw

Trying to find out information about this rapper isn’t easy. This isn’t Lil Mexico even though the Twitter nickname is his nom de plume in rap. This isn’t Lil Mexico either, though it’s a former neighborhood in Dallas he shares a name with. As best I can tell THIS is the actual Lil Mexico on Instagram. One page I found describes him as “an American rapper from South Carolina” and offers no other details besides a list of his mixtapes.

Let me tell you what I DO know about Mexico. His imprint for “Life of an Outlaw” is MMO, which was what ultimately led me to his presence on Instagram. He’s working with a popular producer named jetsonmade for this album — a short album clocking in under 30 minutes in length. He’s well connected among the current generation of rappers who are named “little” or “young”, drawing cameos from Yung Mal, Lil Gotit and Lil Keed among others. The latter’s album being titled “Long Live Mexico” may imply a familial connect given Keed is Gotit’s older brother, so I can see them all being cousins. Then again it could just as easily be one huge coincidence.

“Is you sellin or you buyin?/You trappin or you lyin?” Lil Mexico flashes his stacks of cash and whips pots on the stove top as scantily clad women make their cheeks clap. It shouldn’t take the average listener too long to figure out what Mexico is about, or at the least the image he’s portraying on his records. “Ain’t no competition, n*ggaz know I run the city”. The visuals and the message don’t even change that much from one song to the next. “Trap Jumpin” is practically a remix of the “Trap Boys Remix” above. “I can’t work no 9 to 5, I fell in love with sellin drugs”. We got it Mexico. We understand.

It’s musically and lyrically like Jesse Pinkman jumped into hip-hop minus the Hazmat suit and “Yo, Gatorade me bitch!” Mexico also has no remorse for his lifestyle, and over the course of Breaking Bad we at least got a sense of Pinkman’s increasing reluctance to endure the cost of his drug dealing. He had a soft spot for the children that meth users, dealers and makers put into harm’s way, perhaps recognizing his own lost innocence in them and trying to protect them any way he could. Lil Mexico is what would happen if Pinkman became Heisenberg — if he embraced the life and became a larger than life figure not to be crossed, proud of being damn good at his work. He literally tells us he has no remorse on “IDGAF.”

“I got them racks, don’t give a fuck what you thank … take a loss and get it back, don’t give a fuck what you thank”. At this point I have to go further down the rabbit hole and ponder what fuels Lil Mexico’s obsession with bragging about how good he is at selling drugs, making money, and giving no fucks about anything. It reminds me of an old track by the 5th Ward Boyz and Geto Boys where they pointedly asked “How the fuck you kill a n*gga on every motherfuckin song?” I feel Mexico might be crossing into a whole new category — not a “studio gangster” but a “studio trapper.” If he trapped as much as he does on this short album in real life, one can’t imagine he’d ever WANT to rap about it. That’d be like self-snitching. If he actually does trap this much though, a higher power needs to be looking out for him constantly, because it’s a short career with a high mortality rate. The song “Headshot” proves he’s well aware of that too.

The bottom line on Lil Mexico is that he is entirely convincing in telling us just how much money he earns making drugs and selling it to fiends. In that one narrowly defined area of criminal enterprise he would undoubtedly be a kingpin in South Carolina or anywhere else. The entire problem with being so narrowly defined by that enterprise is that it’s hard to broaden his appeal. If you like music about trapping or you’re in the trap yourself, as Lil Keed himself might say, “Long Live Mexico“. If you’re not then “Life of an Outlaw” becomes very repetitive very quickly despite its short length and the above average bump of jetsonmade’s beats.

It’s problematic when a rapper’s album might be more listenable as an instrumental, but our erstwhile outlaw seems to have forgotten to tell a story that could captivate the listeners and resorted to bragging about having “a jumper like Jordan”. How about telling us what you did with the money? All the fly honies? The trips you took, the fiends you hooked, the law on your tail, the trips to and from jail. Tell us ANYTHING other than just how good you are at cooking, selling, and collecting cash. If you’re going to tell drug tales at least make them cinematic, not monochromatic.