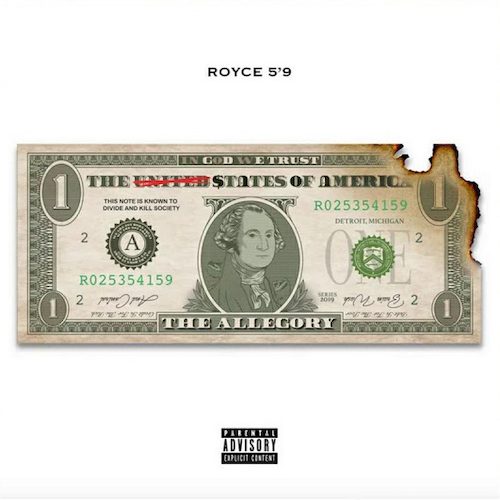 Keeping one’s skills on the mic sharpened is no foreign concept to Royce Da 5’9″. The Detroit emcee never misses an opportunity to exercise both his mic skills and his pen game. Much like actors who don’t turn down roles because they view each role as a learning experience, Royce appears to have a similar mindset. His 2018 solo album “Book of Ryan” was an unflinching autobiographical album in which themes of father and son played a heavy role. His latest album, “The Allegory“, is more extrospective with him mostly playing the role of a “woke” emcee. The title of the album implies that it’s a symbolic work with some kind of hidden message or meaning. The album’s cover features a $1 bill defaced with “this note is known to divide and kill society” written on it. While that image initially gives off connotations of what the listener is in for, “The Allegory” goes beyond that. On the “Mr. Grace (Intro)”, Royce confesses that his eighth solo album is inspired by the “Allegory of the Cave” theory by Plato. In fact, the album’s Achilles’ Heel is the proselytizing that goes further than the intro.

One aspect of the album that’s worth noting is that Royce produced the entirety of it himself, which gives the production as a whole a certain variance. On the song “Dope Man”, he lifts parts of Kool & The Gang’s “Summer Madness” to give a fast-paced funk groove over which he gives his interpretation of how the “war on drugs” has affected American communities. He continues with the drug theme on “I Don’t Age”, where he juxtaposes his own rap skills with what he’s seen in regards to drugs. The album’s theme of enlightenment is summed up on this song when Royce raps, “You niggas always sleepin’, I’d rather stay woke / They say you are what you eat, but I never ate goat”. On “Pendulum”, he speaks on class differences in the spectrum, but the production is too bland to retain full interest. Things change on “I Play Forever” when the first rap guest star, Grafh, provides an assist. The beat on the song picks up with heavier snares when the time comes for Royce’s verse, which is longer and outshines Graph with the wordplay and multis.

The album contains several skits and interludes that serve a two-fold purpose: To tie the album’s theme together and to act as something like informercials for the listener. The “Ice Cream” interlude falls into the latter purpose with a history lesson on the familiar melody which always signaled the arrival of the ice cream truck. The fact that the lesson is only partly correct is an example of that Achilles’ Heel that I mentioned early. The “Ms. Grace” interlude is a conversation between a Black father and daughter as he prepares her for what it means to be Black in America. Given the theme, its reminiscent of “Eve” by Rapsody. Royce decries the violence in his city on “On the Block”, and then gets right back into it on “Overcomer”, which features Westside Gunn. While the Flygod employs his customary street rhymes with his non-sequiturs and “less is more” approach, Royce goes all in with a longer verse filled with wordplay and historical references. Royce’s production on this track sounds inspired by Griselda’s in-house producer, Daringer, in that he utilized an unmodified sample by simply looping it.

The production on “Thou Shall” has a deep bass and a dark atmospheric vibe to it, which suits the lyrics as Royce boasts “I don’t care if you rap niggas is trendin’ topic, your shit is garbage / You couldn’t make a classic out of that trash if you had Brenda drop it”. Griselda are prominent on this album as Royce enlisted all three members of the Buffalo label’s starting line-up for guest features. “FUBU” features Conway the Machine and a braggadocio verse delivered in a flow much different than his usual menacing and slurry flow. However, it’s Benny the Butcher who delivers the hardest of the three. On “Upside Down”, both Royce and Benny employ a theme of turning concepts on their heads. Royce provides obscure references to make his point, especially with the surprising Sara Baartman line. But Benny, who’s reputed to never having a bad verse, is the one who stole the show, especially with the line where he says, “I need violence, Rasheed Wallace, I’m OK with a TEC”.

The “woke” aspect of the album works best when it’s factual and less preachy. It’s preeminent on the KXNG Crooked-assisted “Tricked”, in which both emcees rap about the veils over young people’s eyes. The skit “Black People in America” and “Black Savage” both serve as anthems for African Americans, the latter especially. With Royce sampling African songs for the beat, the production has a “call to arms” feel and is appropriately formatted as a posse cut featuring Sy Ari Da Kid, White Gold, Cyhi the Prynce, and T.I. who spits the best verse on the track.

The three tracks rounding out “The Allegory” are “Young World”, which criticizes hip-hop materialism and political inaction; “My People Free” which big-ups all who inspired him; and finally “Hero” which sounds like a track from “Book of Ryan” that didn’t make the cut. Overall, Royce can spit, that’s not in question. While handling all of the production himself is a valiant effort, it’s evident that Royce had a wobbly experience with it in that it isn’t fully consistent. Even so, “The Allegory” is another solid effort from the Detroit rhyme sayer.