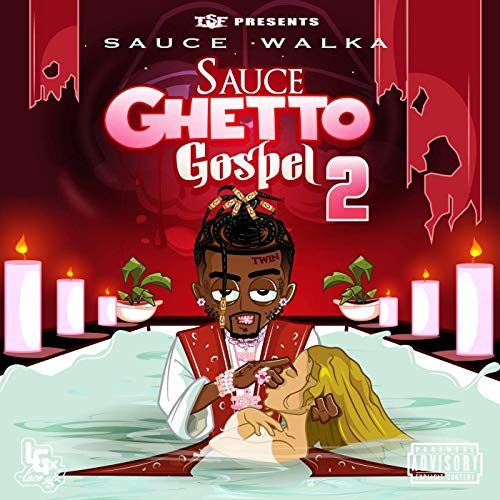 After seeing the support for RapReviews in December, I took it as a personal mission to review more new rap albums that dropped that month. One such rapper was Sauce Walka, who dropped “Ghetto Gospel 2” without me having even heard “Ghetto Gospel 1.” That’s not to say the Houston rapper is completely off my radar though. He appeared on the last posthumous album from XXXTentacion, and he’s been featured on songs by Philthy Rich and Slim Thug among others. Even though he’s proudly repping Texas for most of “Ghetto Gospel 2“, the title track features an artist I am less familiar with named El Train who I suspect is from New Orleans. If not he’s definitely channeling the vibes of Terius Gray with every line he says, ha.

Speaking of comparisons, I’ve seen references comparing Sauce Walka to Slim Thug while doing research for this review, but I don’t hear it. Thugga has a very distinctive deep resonant voice, while Walka is more animated and raspy by comparison. Walka has a penchant for painting cinematic visuals with his words as heard in “Sauce Creed”. After using his voice to apply pain(t) to the instrumental’s canvas he vows “I wish my car was a plane to fly away/codeine fountains in my hideaway” to make it clear relating this struggle takes a heavy toll.

I’m gonna be honest and say I don’t know how he got away with the chopped and screwed Queen sample on “Mama” featuring Mozzy, but I love it. Maybe the estate of Freddie Mercury got a big check. This is Walka at his most animated, and in the process he starts to sound like Kendrick Lamar. Even though the loop on the track becomes repetitive by the end, I could have listened to him holler on it for a few more minutes just because he was so energetic. I mean no disrespect to Mozzy but he actually brings down the track when he jumps on.

And then to flip my perspective on his style “Each 1 Teach 1” finds Walka sounding eerily like Rick Ross, complete with a flow that seems almost out of breath and dreams of balling large with a Tony Montana lifestyle. The mellow instrumental and high pitched background vocals only make it even more obvious his influence on the song. The only thing missing was a sample saying “M-M-M-Maybach Music.”

I’ve probably given you the impression that Walka is an imitator and not an originator. If that’s true then I’d take it as a positive because at least Walka imitates rappers that (1.) I enjoy listening to who (2.) ACTUALLY RAP. You’re probably used to new artists coming out who tune up their vocals, medicate themselves until they can’t feel feelings any more, then sing the same two bars over and over on an instrumental. It’s not as though Walka is strictly an imitator either. “Cold Outside” shows Walka spitting a slow flow that’s distinctively his own as the Houston rapper has an out of body experience, seeing the pain of a woman catching a beating through her own eyes.

It shouldn’t be this refreshing to hear someone not glorifying violence against women and referring to them as strippers and hoes, but Sauce Walka repeatedly defies my expectations on “Ghetto Gospel 2“, not the least of which is that I’m used to artists turning in albums of 30 minutes or less. This release more than doubles that. “We cut from a different cloth” are the words that open “Out the Mud” featuring Lil’ Keke, and I’m happy he doesn’t have the same fabric as everybody else. He wryly notes “Down in Texas, guns is legal from the time you drop yo’ baby bib/now shake the crib” and that “Not everybody can slam a dunk or run the field” when it comes to breaking out of that aforementioned mud.

Sauce Walka is definitely worthy of a sequel on “Ghetto Gospel 2” and might just want to do a “volume three” to follow it up. The only objection I see coming his way is right-wing evangelicals who think the cover of his album is sacrilegious, but the late Bushwick Bill once appeared on an album in a hospital gown after putting a bullet through his eye. This hardly even compares in terms of notoriety — it looks more like a scene from an episode of South Park. Walka’s no cartoon though, he’s for real.