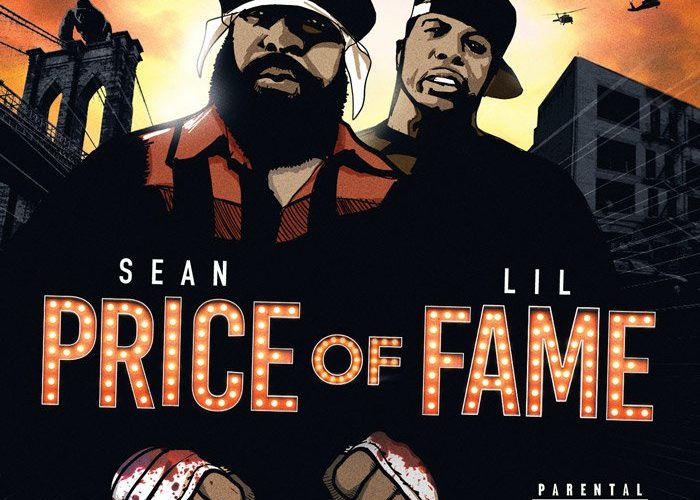 Sean Price and Lil Fame have a lot in common. They both emerged in the 1990s in the duos Heltah Skeltah and M.O.P., where they partnered with a gruffer vocalist and delivered grimy rap anthems for the world to punch enemies to. They represent Brooklyn, New York – more specifically the Brownsville neighborhood. They both have a brilliant sense of humor that never detracts from their aggressive content – if anything it only makes it MORE vicious. If I was to draw a Venn diagram representing Sean Price and Lil Fame’s careers, the crossover section (or Realeaux triangle) would be huge. I also know that both of them would punch me in the face for drawing a Venn diagram.

But that’s why we love them. Sean and Fizzy (Womack) were clearly good friends and you can tell that their personalities are similar, just by listening to past collaborations. 2010’s “Critically Acclaimed” saw the two joined by Saigon (come back Sai, we need new music!) for a record-stealing track from Statik Selektah third LP “100 Proof”. Whilst Fizzy is pissing off the engineer having to do a radio edit with the excessive curses, Sean declares he hates everybody, whether it be thugs, nerds or himself. There was “NY Barbarians” back in 2013 and also the Snowgoons posse cut “Get Off The Ground”, but they didn’t appear together in the video.

They did appear together in Termanology’s “I Rock Mics” from 2014 but whilst Sean and Fizzy were working on “Price of Fame” in 2015, Sean, unfortunately, passed away at the age of 43. There have been three posthumous Sean Price records released since (“The Keys of Price”, “Imperius Rex“, “86 Witness“) and all of them were well received – the quality of his content hasn’t dipped and that’s a testament to the quality work by Duck Down Records to ensure his legacy isn’t tainted.

A self-professed M.O.P. fan, I nonetheless questioned whether Sean Price had enough content in the vault to put out a fourth banger. Hearing M.O.P. kick off the record with “Big Gun vs. Lil Gun” certainly hits the spot – Sean could have been an honorary third member given he has his adlib game locked down (P!). It’s a typical no-nonsense head-nodder with attacks on vegans, skinny jeans and Sean taking a jab at Ebro. I mean, if you’re a skinny jean-wearing vegan getting your hip hop fix from Ebro in the Morning, this isn’t the record for you and that’s outlined immediately. “Center Stage” follows and highlights Fame’s ability on the production side – it sounds handcrafted for Sean. Beats with short riff melodies and hard drums became a signature for Sean later in his career and it’s why Small Professor smashed it on 2019’s “86 Witness”. Fame understands this and “Center Stage” is probably the best example, being a Sean Price song with Fame on the hook:

“I don’t take long walks in the park like Jill Scott
I whack young niggas in the park when pills pop
Shake young niggas ’til the bitch say “Chill, Stop!”
Make her sell her soul on Fade and Bill block
Chill ack, we know P got skills
But that [censored] talk gon fuck up your Reebok deal (true)
Disregard my second bar
Clutch your weapon hard that will fuck up your repertoire
Peep game, 3 train, Rockaway Ave nigga
Street thang, weakling not your gay ass nigga
I make ends with some of y’all
Handshakes is fake, I ain’t friends with none of y’all
I’m better than y’all
Punch in the jaw, your nickname is Cerebral Pals'”

Of course, P isn’t shy of being politically incorrect. I like to think there’s a videogame punchline on “Boston George” (“bullets racing at you, clap whoever can’t OutRun”) but even if it was, it’s because P was pounding on the nerds at the arcade. It’s another solid collaboration, this time with Tek from Smif-n-Wessun. Steele actually appears on the next track, “Pigs”, a rare moment where Sean praises the hard-working American police officers. Okay, that’s slightly inaccurate, given Steele wants to “turn these cops to bacon”. It’s actually Sean’s take on the nursery rhyme “This Little Piggy”, bolstered by another potent Fame production that weaves a Fame adlib (“Come on!”) into the beat. It’s dope, and infinitely better than the lead single “Peter Pop Off”, the album’s one weak moment. It’s great to hear Teflon again, but the hook is poor compared to what else is on offer here.

With Billy Danze on “Big Guns vs. Lil Guns”, it was only correct to get Rock involved and he does on “They Ain’t Fucking With Us”. It’s blunt and not winning any Pulitzer prizes for inventive use of the English language, although Rock does demonstrate he’s not lost any of his breath control. The more I hear of Illa Ghee, the more I feel he’s improved with age. The voice is instantly recognizable and his rhymes have become more memorable in recent years, with him “kicking daughters off swings” on “Remember the Time”, a scathing collaboration that sees Sean bringing a gun to a peace rally because he’s “non-non-violent“. Now if that’s not worth the price of admission, I don’t know what is. Maybe the hard as nails album closer “Enemy of the State” that sees Fame, Guilty Simpson and Conway the Machine join Sean for a perfect sendoff. That Guilty verse is filth!

Sean is never outshone on “Price of Fame” and his one-liners are as stupid as they’ve ever been. “Jokes on you, fam, set fire to your flesh, now the smokes on you, fam” will have you laughing even after your tenth listen, and it’s that unique brashness that ensures Sean Price will go down as one of the great emcees of the past two decades. With Lil Fame providing some of his best production, tailor-made for Sean’s style, and the fact many of these tracks were crafted whilst Sean was alive, this could very well be the best of his posthumous releases.