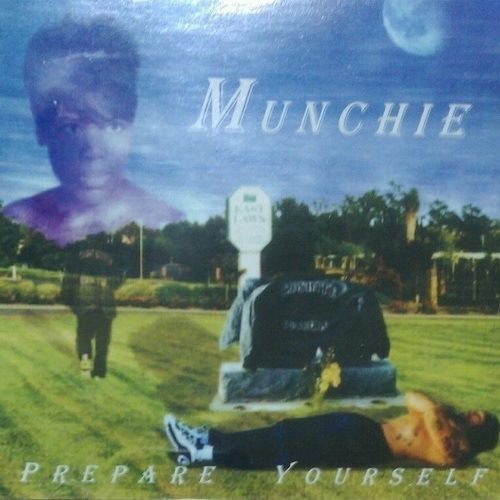 Every now and then a relatively unknown rap album ascends to the coveted obscure gem status among hip-hop heads. For the artists themselves this isn’t necessarily a great achievement. They signed a shitty deal, tried and failed to run their own record label, only distributed their music in a very small geographical area, only released one album, or got sent to jail right as their career was about to blow up. To truly transcend to the level where you get described as a must listen may take ALL of these things happening at once. It obviously means the artist was a commercial failure in every way but ironically may result in copies of their work going for ridiculous amounts of money on eBay, with bootleg “authentic” copies of it soon to follow.

The tale of Sacramento rap artist Munchie is one of heartbreak for everybody involved other than crate diggers. You won’t find “Prepare Yourself” available anywhere — even bootleggers seem to have missed the gold rush on this one (ironically this review could change that). Legend has it that only one hundred copies of this album were pressed and sold locally by Crushite Records before the aspiring emcee was sent to prison for 25 years to life. I’d like to assert that all of this is a true fact but dear reader I can’t in good conscience say that to you. There’s only one source that even attempts to confirm these details and it offers no references as proof. We don’t know the rapper’s real name, nor when he went to jail, nor how many units the album sold before he did. Even one newspaper clipping would be helpful but I have none to offer. Despite the fact this all happened only 20 years ago the details already seem to have been lost to time.

If this makes you in any way skeptical or suspicious of the album’s authenticity I wouldn’t blame you. “Fake news” became the rallying cry of right wing trolls in the late 2010’s but before they co-opted the term it simply meant anything that appeared to be authentic but was actually a well crafted fiction cleverly disguised as a true story. The Onion did it for satire long before it became a genuine concern that news sources were not bothering to authenticate the stories they published or broadcast. Some of them actually mistook articles FROM The Onion as real news, a thing I had genuinely believed nobody would be stupid enough to do, but it happened anyway. I won’t assert to you with 100% authority that “Prepare Yourself” isn’t someone’s attempt to create a compelling story out of whole cloth.

There’s an amateurish quality to “Prepare Yourself” that belies the idea the album is an elaborate hoax. From the poorly Photoshopped and designed cover art, to the shockingly thump-less instrumentals Munchie raps over (that’s almost inconceivable for a Sac Town rap artist), to the fact that this “album” only has six songs, it feels in every way like a rapper whose ambitions exceeded his own talents. Despite that the lyrical talent is clearly there even if the musical support is not. “Internal Pain” shows us a thoughtful young man trying to make sense of a troubled world.

“Heaven help me, I’m on my way to hell fast” states Munchie as he apologizes to his mother and contemplates suicide as a way to atone for his sins and mistakes. “I often sit and stare at my own gun/I should do it but I don’t want to die young … nobody cares, all I’m getting is cold stares”. At least now one or two people care thanks to the album’s rediscovery. There’s every reason to believe that with a little more polish that Munchie could have at least been a California favorite whether or not he went national. In a state of 40 million people (bigger than the entire population of Australia) you can build an entire rap career off getting nothing but California Love.

Even though whispers of this album made it seem like an unheard classic, it does feel “overrated” compared to the compelling stories told about it. It’s not as though Munchie lacks the talent as an emcee to deliver. His lyrical ability shines through not because but IN SPITE of the presentation on “Prepare Yourself”. If he had linked up with the right producer and label and avoided his alleged prison bid he might be a California rap legend today, but this one stayed obscure with good reason. Munchie’s lasting legacy is that of a candle that burned very bright for a very short time and quickly got snuffed out before he could start the fire.