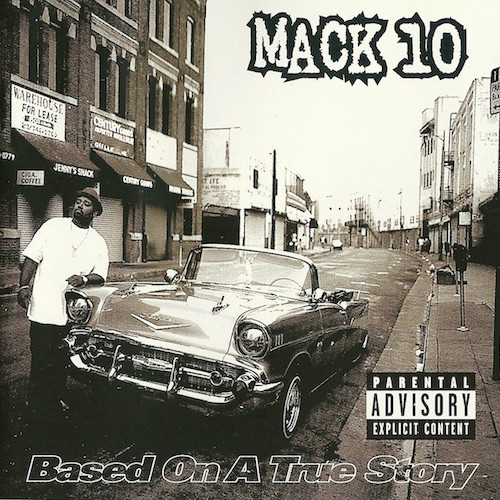 Based on a True Story

It has been over a decade since Mack 10 dropped a solo album, and damn near 20 since the last Westside Connection release (not counting a “greatest hits” disc). That’s definitely long enough for me to be nostalgic for Dedrick D’Mon Rolison. In fact when revisiting Mack 10’s sophomore album “Based on a True Story” I was struck by just how consistent his sound and delivery were throughout his career. Whether you loved or hated his Inglewood style and delivery, it seemed like he was minted exactly the way he’d remain from the the first time he appeared on a remix with Ice Cube.

I’m sure the haters will immediately bust on him for only being the one millionth rapper to do a Kool & the Gang “Hollywood Swinging” track with “Inglewood Swangin'” on this album. Much as I might be tempted to as well, I feel like Bobcat and Mack 10 changed up just enough to justify the fact it exists. Too $hort’s “Money in the Ghetto” is a more direct jack and I still love that song too, so I’m not knocking the hustle. At least Mack 10 is repping for his home turf with pride. He’s also repping his love of N.W.A and his homey Ice Cube with a remake of “Dopeman.” This one’s a little harder to give a pass to since it just doesn’t hold water compared to the original. It’s a heartfelt tribute but I still prefer to hear the real thing.

“Dopeman” is one of two which had life outside of “Based on a True Story,” the other being the Ant Banks produced “Can’t Stop” featuring E-40, which originally appeared on Banks’ “Big Thangs.” It’s a certified banger that also unintentionally highlights a flaw in Mack 10’s career — he’s so calm and unflappable that the charisma of others outshines him in duets and groups. In Westside Connection his verses were always third out of three. You couldn’t be bigger or badder than W.C. and Ice Cube even if you tried, but I never got the impression he wasn’t comfortable with his position until the group broke up. Still when you hear Cube rap on the Binky Mack produced “The Guppies” there’s no doubt who is the bigger rap star of the two.

Sharing the spotlight with both Cube and Snoop Dogg on the Soopafly laced “Only In California” only exacerbates Mack 10’s “second banana” problem. If Westside Connection hadn’t happened this would have been an equally fine supergroup, although Snoop had his own with Nate Dogg and Warren G so it worked out as it was supposed to.

Even though I am giving Mr. Rolison a bit of a hard time, my only real disappointment with his sophomore album is that they chose “Backyard Boogie” as the lead single. Much like his “Dopeman” remake it’s not so much that it’s a bad song, but it’s not one that suits 10’s style. It’s a summer anthem song from a man you’d expect to crack heads, not cold ones at the barbecue. He pulls off the transition but can’t help a few corny lines here and there. “Baby got back like Mix-A-Lot said.” Referencing someone else’s bigger hit doesn’t automatically make it rub off on yours.

All in all “Based on a True Story” is a solid album from a rapper who always straddled the fence to superstardom but often seemed better known for the company he kept. Maybe if reality TV had been a more dominant part of the entertainment landscape in the early 2000’s, his short-lived marriage to T-Boz would have developed into a “Marrying the Game” ratings success that propelled him to the mainstream. I don’t get the feeling Mack 10 is a bitter dude though. He did good enough for long enough that even now in semi-retirement I have no doubt he’s living quite comfortably. He could always come back for one more solo album or Westside Connection reunion though. Never say never.