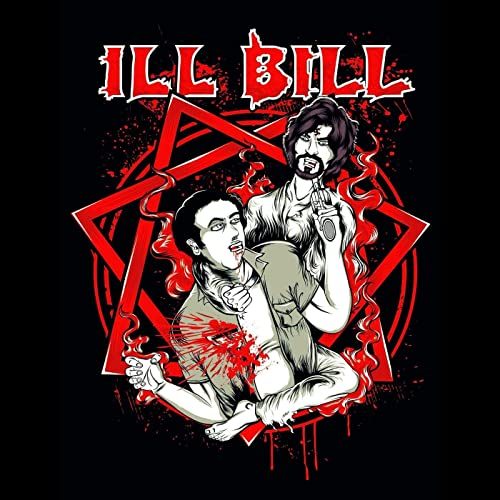 If I have a favorite conspiracy theorist rapper it’s Ill Bill. I’m not prone to believe those theories, because they tend to involve taking leaps of faith to connect completely unrelated things, or coming up with fantastical “magic bullet” explanations to explain historical events. I don’t believe there’s an Illuminati that secretly controls every aspect of our lives, or that 9/11 was an inside job, but that doesn’t mean I’m not entertained by these ideas. I enjoy them the same way I would a Hollywood movie or fictional novel — I imagine the scenario in my head and explore the landscape with my mind. For me William Braunstein is the author of the apocalypse, the method to the madness, and the herald of holy war. He paints the secret societies with a vivid brush and makes you see their machinations the way he does.

Most of us are familiar with the pentagram as a symbol of the magical or occult, but before Ill Bill’s “Septagram” I had never given much thought to a SEVEN sided star. It certainly has its own mysticism and lore in global culture, though it’s also the shape of a police officer’s badge in many precincts around the United States. For Game of Thrones fans it’s also a symbol of the Faith of the Seven. Any or all of these things may be what Ill Bill is alluding to with the album’s title, but I went looking for a more direct connection with the number of guest stars on Bill’s album. Goretex, Jise One, Q Unique, William Cooper, Trife Diesel, Slaine and Lawrence Arnell. Some appear on more than one track, but there’s your seven pointed star(s).

Of course this theory like most conspiracies can be torn apart like a ball of Play-Doh if you grab it and pull on the ends. Uncle Howie is listed as a guest star on the album for “Spumoni Gardens”. Since he’s not actually a rapper or singer, you could split hairs and say that there’s still only seven guests, but given what the late Howard Tenenbaum meant to Bill and his brother Necro, I’m going to respectfully insist he IS a guest star any time they bill him as such on an album.

If the album has a “single” as such it’s probably “Manson vs. Berkowitz” featuring Q-Unique. It’s the only track that has an official lyric video, and it has the trademark underground NYC hip-hop sound associated with Non Phixion and The Arsonists respectively. Given their long history of working with each other Q and Bill are an ideal tag team, holding the ropes patiently until the hot tag and storming into the ring to ferociously attack the beat with spitacular verses that will force studio engineers to spend hours disinfecting equipment. Q has “The mind of Heath Ledger with a handful of pills” while Bill is “a cross between a scorpion and Kevorkian”.

The one thing that seems to haunt me with Ill Bill albums over the last decade is how short they are. Given how much I enjoy his work I could easily spend a lot longer than 27 minutes and 40 seconds listening to his bars over these grimy beats, but it is what it is and you get what you get. Perhaps 2020 will be the year William gives us another magnum opus. We all have unexpectedly more free time than we used to thanks to a global pandemic that ironically feels like a conspiracy theory come to light. People are grasping at straws for any explanation — was it a bio-weapon created in a lab? Was “patient zero” in China an agent of the communist regime? Did a time traveler from the future bring back a novel coronavirus we had no immunity for? Believe whatever you like but enjoy “Septagram” as an escape from the problems of the world, at least for a little while.