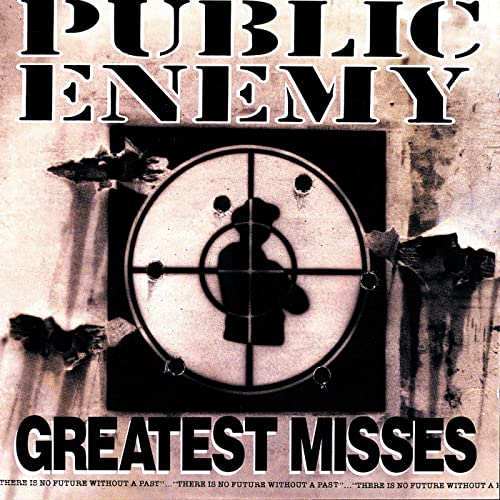 As a teenager I understood that Public Enemy was parodying the well worn concept of releasing a “Greatest Hits” album with the title of “Greatest Misses.” At the time those albums seemed to me like confessing to creative bankruptcy. “We have nothing left to say, so here’s what we used to do in our prime. Thanks for putting more money in our wallets.” For better or worse though a “Greatest Hits” album used to have a purpose. It was essentially a mixtape compiling together all of your favorite songs by one artist in one place. These days it seems like an incredibly antiquated concept given you can use Amazon Music, Spotify or YouTube to revisit those artists and instantly make your own playlist, but in a pre-streaming era “Greatest Hits” albums did all of the work for you… for a price.

“500 FBI agents/coming after us/with a license to kill/30 mill’/claiming it’s just a drug bust.” Those opening words from Chuck D on “Hazy Shade of Criminal” along with the sounds of weapons being cocked and loaded prepare you for war, and the Bomb Squad wastes no time accompanying it with their typically dense layers of sound and drums. The words “rebel base” are almost obscured under Chuck’s lyrics and the heavy beats, but it’s both a nod to the Ultramagnetic M.C.’s and a reminder that P.E. are the original rebels of rap. Chuck was “woke” before that term even existed. “Jeffrey Dahmer, enters the room without cuffs/how the hell do we get stuffed/in the back of a cell on the isle/ain’t it wild?/WHAT’S CRIMINAL?” These are questions we’re still asking today. “Police supposed to keep the peace/but I can’t trust ’em so I keep my piece.”

This powerfully provocative political piece of music shows that even as a parody of music industry tropes, “Greatest Misses” is a misleading title. “Hazy Shade of Criminal” is not a miss in any way, nor is “Gotta Do What I Gotta Do,” which first appeared on the “Trespass” soundtrack. Wait, what? Okay so this album is neither “hits” nor “misses” — it’s an entirely different animal altogether. The first half of the album is new material like “Air Hoodlum” and “Hit Da Road Jack,” while the second half features remixes and alternate takes on existing Public Enemy tracks. The name of the album may have unintentionally caused some consumers to think neither half was worth owning and they couldn’t have been more wrong.

One of my absolute favorites back in the 1990’s that still holds up today is the Jam Master Jay (R.I.P.) remix of P.E.’s classic “Louder Than a Bomb.” The group obviously thought it was a winner too as an official music video exists for this version, AND the song was re-released on Public Enemy spinoff PE 2.0’s “InsPirEd” a few years ago. JMJ took an already intense song and gave it a “Phone Tap” funk groove that was just as dark, but now had a new dank funk that wasn’t part of the original release. They’re both classics.

It’s also incredible to hear a live performance of “Shut Em Down” from the United Kingdom. The audio is a bit scratchy due to the speakers in the venue nearly being blown out by the bass, but somehow Flavor Flav and Chuck still come through loud and clear through the noise. Some versions of “Greatest Misses” didn’t include this song, and that’s an ACTUAL miss. I’d argue it’s incomplete without it. It’s a must hear, blown out speakers and all.

Now that I’ve handed out all this praise let me be clear that this is far from the most essential Public Enemy record in their catalogue. Many lists even omit it from their discography altogether. The fact that many of these songs appear on other albums, albeit with different mixes than the ones heard here, probably causes it to be disregarded as a “studio album.” Some of the remixes don’t help matters either. The Terminator X “Reanimated Getaway Version” of “You’re Gonna Get Yours” is inferior to the original, as is Chuck Chillout’s take on “How to Kill a Radio Consultant.” I enjoy the hard rock “Black Wax Metromixx” of “Party For Your Right to Fight” but it removes one of the coolest things about the original — Chuck and Flav’s lyrics being layered right on top of each other performing the verses together.

Even the new(er) material is a mixed bag here. If you’ve heard the Flavor Flav solo track “Gett Off My Back” once you probably don’t need to hear it again. The P-Funk samples and references are welcome, but it’s incredibly absurd to hear a rapper who has struggled with drug addiction rap “The monkey ain’t no joke/so you wanna mess with the coke?” and take him seriously — then he repeats those same bars over and over. The most amusing thing about this album was the fact that my copy came with a lyric sheet that transcribed Flavor Flav’s words as “as lamem likum” instead of “asalaam alaikum.” He probably should have been insulted by that being inside a P.E. album, but I’d guess he was too high to give a damn.

The simplest way to summarize “Greatest Misses” is that it’s worth owning if you’re a dedicated Public Enemy fan. There are some lesser known and quite frankly forgotten songs here that deserve their own day in the sun. If you’re a casual though you can “miss” this release and not feel bad about it. The irony here is that if they had sold this as two separate EP releases it might be more fondly remembered — one for the remixes, and one for the rest. They tried to serve two different purposes at the same time and in the end prevented the album from succeeding at the highest level.