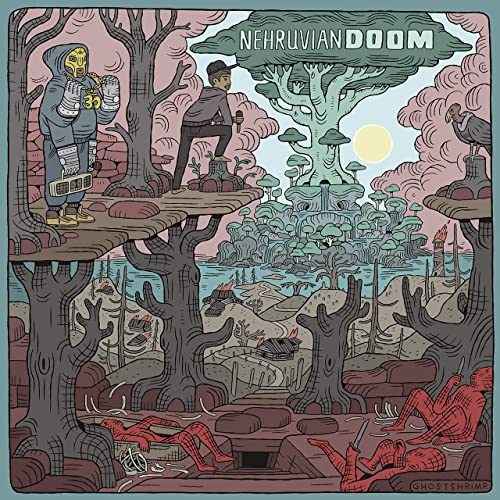 Originally released in 2014, “NehruvianDOOM” is the unexpected but wholly welcome collaboration of Nanuet, New York’s Markel Scott a/k/a Bishop Nehru and Long Island’s rap supervillain Daniel Dumile a/k/a MF DOOM. It’s a true generational gap skipping collab as Nehru is in his early 20’s while DOOM is nearing his 50’s. Nehru released his first mixtape seven years ago while DOOM has been rapping for almost my entire lifetime, although there was a long period of silence in the 1990’s when his brother Subroc died. That was the beginning of Dumile’s transformation from the politically-minded but largely upbeat Zev Love X to the beer swilling Metal Face Villain who has been a cult favorite among rap fans ever since.

Described before release as a supergroup that would feature production from DOOM and bars from both emcees, the truth behind the mask is that DOOM’s raps are infrequent and sporadic. His presence can still be felt in the jazzy soulful loops that are trademarks of DOOM’s self-produced tracks, but he isn’t the ne’er-do-well in front of the mic most of the time. “Pay no attention to the man behind the curtain” could be this album’s mantra, but when he reveals himself on songs like “Caskets” the trademark humor and self-deprecating raps are there. “Damn mask get stickier than crack sweat.”

Even when he’s less apparent on the mic tracks like “Om” still show Dumile providing the hook as well as the beat. The song is in capable hands with or without DOOM’s bars as Nehru has an exuberant delivery and a desire to hustle for his success. “I’m trying to live great so I guess I gotta give what it takes.” It reads simply in print but it actually requires a nimble tongue and precise breath control to spit the words in time with DOOM’s fast track.

The appearance of Lord Quas on the interlude after suggests that another associate of DOOM’s villainy isn’t far away, and Dumile lets Madlib take over behind the boards for the finale “Disastrous.” This once again frees him up to spend more time on the mic, where he vows “to keep it heated like Fukushima tai chi.”

If you were fortunate enough to cop the album on iTunes (and I wasn’t) the album came with a bonus track produced by Nehru called “They Say Bishy Bish,” but I can’t comment on what I don’t have let alone can’t find — even the normally reliable musical archives of YouTube are bereft of this cut. Still “NehruvianDOOM” offers hints at a pleasant partnership that if I’m being honest actually under-delivers given the musical and lyrical talent of both men. Don’t misunderstand me — this shit is good — but it feels like we’re getting just dessert(s) and not the full dinner course. It’s more like a 2020 album given it’s barely a half hour long, and even though you can tell it’s a true collaboration more interplay between both men on the mic would have gone a long way. For true-believers of either artist it’s still a welcome addition to your comic book laced catalogue.