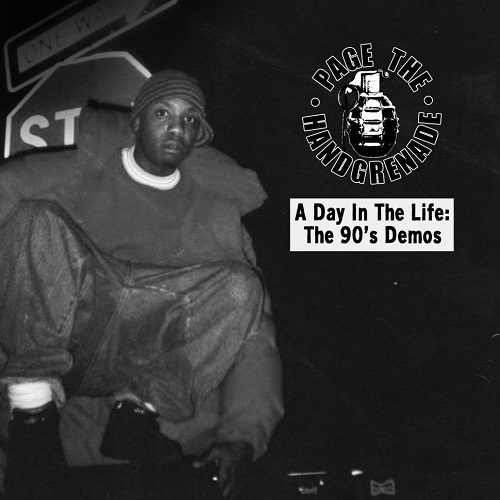 The rapper we are talking about today had the misfortune of recording tracks with some very in-demand people that didn’t make it to any pressing plant at the time. Linking up with the Diggin’ In The Crates collective in the mid-’90s, he rapped on the Buckwild-produced “Mass Hysteria”, shared the mic with O.C. on “Weak Ideas” and with Lord Finesse on “Check Me Out Baby Pah”. The latter was released four years later by Finesse himself, the other two more than ten years after the fact.

At one point – and who can blame him? – he decided to go for dolo, recording the demos exclusively released by the audio archeologists at Chopped Herring Records in 2019. The material, reportedly dating from 1995 and 1996 (the period probably extending to 1997, see the “Where I’m From” sample and the Big/Pac reference mentioned below), is largely self-produced and dispenses with notable support.

The Bronx MC, who for a time attended the same high school as Lord Finesse, originally went by Rampage, but with the appearance of Flipmode Squad member and Busta Rhymes cousin Rampage the Last Boyscout around 1994, was forced to modify his moniker. He didn’t seem to sweat it that much, in an interview with the Hip Hop – The Golden Era blog last year easily giving meaning to both Rampage and Page the Hand Grenade: “I am an Aries so the Ram is my zodiac and the Page is what I write on. My name was established in 1989 but was never officially trademarked. I changed my name to Page The Hand Grenade… Mind blowing scriptures on pages.”

The showcase at hand reflects the artist’s determination but also the uncertainty of his endeavors. His prospects in the face of “ass-kissing critics” and “the same old stuff on the radio station” are a recurring issue, but so is his ability to prevail the hip-hop way. But while he avows, “Hip-Hop is my religion”, he asserts, “Rap is not my main profession”.

Not shrinking from candid personal revelations, he relates how his two kids take priority and that although he wants stuff, he actually has what he needs. “I’m satisfied with my life”, he also says, and if that sounds unspectacular, remember that you will not typically encounter such a sentiment in rap lyrics, which makes it exceptional in its own way.

“I was chillin’ with my children
Just because I ain’t drop, that doesn’t mean I wasn’t winnin’
in life… timeout – I look at mines as a whole
What I’m gon’ be doin’ in the next ten years, what’s my goal?
Will I blow? Matter of fact, I don’t know…”

At the same time he has stunningly concrete ideas about his first three albums and no problem dreaming big, taunting competition, “You can dream about the Palladium / Watch, I’ma do a show at Yankee Stadium”.

On just these 8 tracks, Page comes across as a cool, calm and composed individual, especially under the impression of his tranquil flow. The Lambert Houses delegate cares about clear enunciation and is in no hurry to deliver his raps. Despite the “Bronx bomber” tag he gives himself, he sounds more like a dog-tired D-Nice. He did sound more animated on “Check it Out Baby Pah” and “Mass Hysteria”, where he was more on a Big L-type of vocal offense. This undermines not only the promise of the names Rampage and the Hand Grenade but also of his battle rhymes, which are simply not fired off with the necessary force. To his credit, he does land lines that resonate, such as: “MC’s offer me propositions: ‘Stop the dissin’!’ / See how bitch-ass niggas avoid competition?”

On “Ringin Bellz” he sets a date for a showdown at the Lyricist Lounge, looking ahead to the prospective battle with a pensive afterthought: “Will it be legendary like Capri versus Doo Wop? / Or will it be a disaster like Biggie versus Tupac?” The downside of young Page’s combative attitude is that he ever so often digresses into battle rhymes. “You’re comin’ down, I’m movin’ up, I think we’re headed on a collision course” would be a great conclusion to a battle rap, but on “Emcee Inspection” it’s just an unconnected piece among others.

Diggers could hit upon much less refined ’90s demos than those found on “A Day in the Life”. “I write and produce”, he says matter of factly on the title track, and that’s what he has done here with due diligence. Even the remake of the Marley Marl-curated Biz Markie/Heavy D duet “We Write the Songs” from 1988 is thoroughly executed. Overall Page’s original production is more Beatminerz than D.I.T.C., but with a lighter note.

True to his reasonable frame of mind, Stanley Grimes tested other career options and at some point joined the Air Force. He set about several recording projects and in the interim also hooked up with fellow Bronx underground guardians Freestyle Professors. Besides “The 90’s Demos”, platforms stream his “2002 Demos” and in 2014 “The Stanley Grimes Story” was announced. Throughout the years, it seems, the man stuck to the motto shared here: “Without a record deal I always do this all the time”. Yet for someone whose career began on Buckwild and Lord Finesse (both contributors to Biggie albums) beats and early Doo Wop mixtapes, Page never really put out something of substance until “A Day in the Life.”

Strictly in terms of emceeing, the Page heard on this EP is not a golden era relic. He lacks the chutzpah of his famous colleagues, which becomes particularly evident on “West Nile Virus”, whose hook faintly recalls Ras Kass (“My mission is to shut ’em down and serve ’em laringitis / I’m the invisible disease like the West Nile virus”), but whose best brags are still basic bordering on banal analogies like “My rhymes is like motion pictures, not View-Masters” and “Crush three rappers like L.L. till the break of dawn”. And “Illmatic” samples frankly have to be earned, which is not the case for “So Many Rhymes”. There’s not a shred of poetry in Page’s manner of expression.

At his core, Page the Hand Grenade is a philosophical rapper. He seems to make the conscious decision not to cultivate some kind of recklessness just to draw attention to himself. He chose veracity over ferocity, so to speak. Best illustrated by the matter-of-fact “My freestyle is a rhyme that nobody heard” or the simple formula “I bless mixtapes without all the technicalities / a turntable and a mixer with a little reality”.

Rap is a cult of winning and its disciples are quick to laugh at the losers. Tackling sucker MC’s and handing out competent bits of advice (“Sticks and stones ain’t breakin’ my bones”), Page the Hand Grenade was by no means a loser, but he wasn’t exactly a winner either, by rap’s own lofty standards. But we all know that sometimes the biggest winners are also the biggest losers, not to speak of the fact that ‘winning in life’ ultimately encompasses more than making it professionally or excelling at your passion.