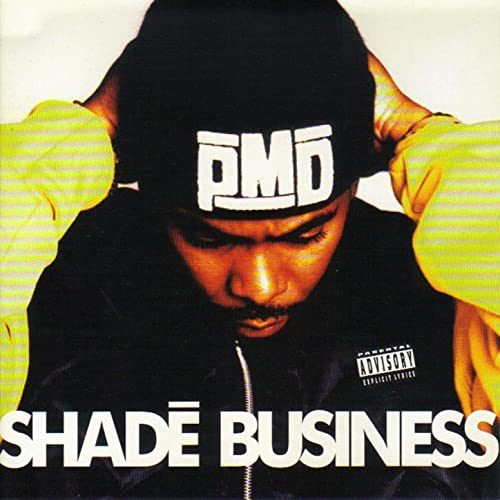 The 1990’s are now a strange chapter in the legacy of EPMD. For a five year period the group was officially dissolved due to personal beefs between founding members Erick Sermon and Parrish Smith, with ugly accusations flying back and forth between them in one interview after another. The once united Hit Squad that contained all of their affiliated friends and family was split asunder as a result, with various artists choosing whether to remain affiliated with Erick or Parrish to make dollars. Sermon scored big by keeping Redman and Keith Murray on his side, but a year later on “Shade Business” Smith fired back with Das EFX on “Here They Cum.”

The key difference is almost immediately obvious. While Erick Sermon was a charismatic rapper with a true gift for production, PMD’s self-produced tracks sound flimsy and uninspired by comparison. It’s not just that he failed Krazy Drayz and Skoob on what should have been a stellar cameo. The album’s first single “I Saw it Cummin'” has one of the WORST samples of Ohio Players “Funky Worm” EVER in hip-hop history. “Dopeman” this is not. “Jump” this is not. Good lord, MC Breed’s “Ain’t No Future in Yo’ Frontin'” takes a MASSIVE SHIT all over what Parrish Smith did here. He manages to make a dope loop obnoxious and annoying and that should be a crime, but his scattershot flow and pathetic attempt at revisionist history are just as illegal. Flexing his Lamborghini right at the beginning of the music video is an immediate “Whose dick is bigger?” move too.

The irony of it is lost on PMD when he raps “I’m blasting niggaz who showboat.” Really? Look in the mirror. It gets worse though. “That’s whack/ain’t trying to hear that/can’t get sidetracked/so bust the impact/then get the bozack/and mind your beeswax.” It’s like Smith forgot how to rap in less than a year, and suddenly got so pissed off that he had to record a diss track without learning how to flow again first. The Ice Cube sample from “No Vaseline” loses all relevance as does Snoop Dogg saying “went solo on that ass but it’s still the same.” No Parrish, no it’s not. His obsession with getting even isn’t limited to the lead single. Album tracks like “Fake Homeyz” betray his motivations before you can even press play.

Unfortunately for Smith matters get worse on the song given that it’s a posse track. While Das EFX are the A-list Hit Squad family members to appear on this album, PMD still gets outshined by seminal 1990’s rappers 3rd Eye and Top Quality on his own song. It’s also one of the few tracks that Smith seemed to have a clue about on the boards, keeping things simple with a strong bassline, pounding drums and some excellent turntablism from DJ Scratch leading nicely into the aptly titled “Phuck It Up Scratch.”

Have you noticed a theme yet? The best moments of “Shade Business” involve people other than Parrish Smith. I went into this review thinking that a quarter century would have mellowed my opinion on this album. Perhaps like various members of the Hit Squad I was “taking sides” and judging everything PMD did through a lens tinted by my affection for Erick Sermon. I can safely throw that rose-colored pair of glasses in the trash and say Parrish Smith’s solo album is STILL BAD. “Steppin’ Thru Hardcore” is an ideal example of what a mess PMD is left to his own devices. The unpolished bass distorts the track, Parrish runs out of lyrics 63 seconds into the song and the beat has to carry on without him, and he drops “gems” on the track like “If you’re down with the Hit Squad, say Hit Squad, damn my dick’s hard.” Yuck.

You have to work extra hard and be incredibly generous to find good moments where Parrish Smith doesn’t make an ass of himself in the booth or on production. Thanks almost entirely to Vaughn Mason’s “Bounce, Rock, Roll, Skate” he finally makes something listenable on “Swing Your Own Thing.” The lyrics are still no good, but having a loop that required almost no effort on his part allows him to invest the energy in his rap, spitting old EPMD lines and cliches in a manner that resembles an actual flow.

“Shade Business” is a forgettable album in almost every respect. Incredibly PMD didn’t learn his lesson from going “solo on that ass” and he released an even MORE forgettable solo CD a couple of years later. In retrospect it seems like he learned he really wasn’t shit without Erick Sermon and that was why they patched up their relationship and got back together. After all the name was “Erick and Parrish MAKING DOLLARS” and you can’t tell me he was making next to any from rap fans as a soloist. It didn’t have to be this way. He could have brought in top level producers, sat down to write some high caliber rhymes (or hired a ghostwriter to do it for him), and put together an album that proved he was just as vital to EPMD’s success as Sermon. Instead he unintentionally proved the exact opposite.