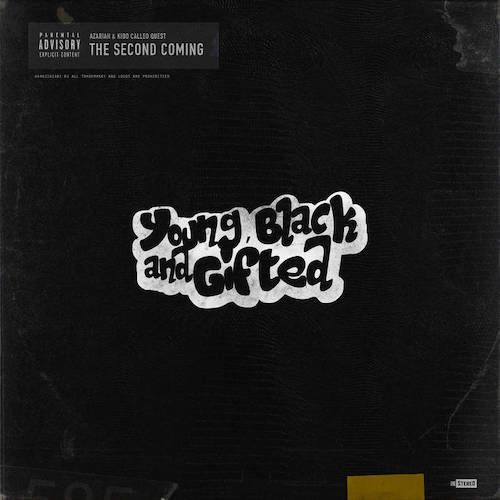 At first “Young Black And Gifted” was simply the title of an album from Azariah & Kidd Called Quest. Over the intervening years since it dropped the phrase has turned into the name of a group, and the group itself has turned into an ongoing concern. Before it became fashionable to think of Rochester as a forgotten hip-hop scene overshadowed by New York City, this tandem was “putting in hard work in getting known locally” with a debut album that was “their chance to shine beyond the boundaries of their area code.” Pandemic or no pandemic that hustle continues.

The Y.L.A.B. motto is evident from the first single on “The Second Coming” and it goes a little something like this: “You a phony fella, homey it’s Az, the one and only/No, company own me, I do it on my own B.” That rugged independence fuels the lyrical passion of songs like “Love and Hate.” Az speaks with the conviction of an emcee with over a decade of experience in the music industry — which at this point is exactly what he has.

“This shit is prophecy, foretold biblical
They gain energy from Satanic rituals
Life is a gift to you, and it’s unpredictable
We sit in school, and learn how to play by the rules”

It’s also telling that in the song’s fade out, which also serves as the lead in to “Respect Violence,” Az and Kidd sampled from a famous Killer Mike rebuttal of Bill O’Reilly claiming hip-hop music and culture creates Godless, mindless criminals. “I would say (to) people that say hip-hop is violent, let’s start where the real violence started. Let’s start with the three major Abrahamic religions, and let’s do away with their books. Let’s start with governments and geo ward politics, let’s do away with our leaders. So after we get down the violent scale, of all the things that create real violence to get to music, it’ll be easy to get to hip-hop.” The underlying politics of 2020 are never far from the forefront on “The Second Coming.” Despite all attempts to “Make America Great” this still ain’t the land of “Milk and Honey.”

“There’s prostitutes on the corner/syringes in the front yard/Cars speeding by with bass that thump hard.” Azariah frequently switches roles throughout the album. Sometimes he’s the observer on the front stoop, telling you what he sees with enough detail to visualize it yourself. Sometimes he’s the weary war veteran, tired of having to struggle every day but committed to making a better life for “Family First.” And sometimes he’s just straight up bragging about his skill. “They don’t do it like me/you is not me/I’m as real as they come, it’s only one me.”

There’s a quiet elegance to how Az postures up in a verse. “I’m gourmet/you niggaz cheap food/snakes and rats I don’t speak to.” While other rappers try to overwhelm you with the size of their vocabulary and how many obscure pop culture references they can tickle your brain with, Az has a matter of fact delivery that’s simple but NOT simplistic. The music Kidd Called Quest provides fits Az like a well-tailored suit. Symphonic layers and electronic lasers pulse through tracks like “Warfare” to get you amped up for the bars.

I came into “The Second Coming” with minimal expectations, having not reviewed their 2013 album or (if we’re being honest here) followed their career since then. There’s clearly something in the waters of Lake Ontario though, because artists like 38 Spesh keep proving it time and again on production and the mic, so if you already knew to stop sleeping on Buffalo perhaps it’s time you do the same for America’s original “boom town.”