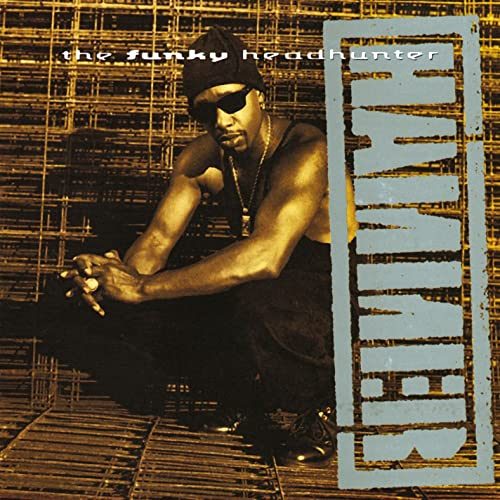 When Stanley Kirk Burrell made this statement in 1994 he was not taken seriously. Despite having dropped the “M.C.” from his name and adopting a harder G-funk based sound for “The Funky Headhunter,” few people found it believable that the man behind “U Can’t Touch This” and “Pray” had suddenly gone from radio friendly pop music to being an underground hard rock with street credentials. The now infamous “Pumps and a Bump” video only made matters worse. Considering he’s better known for his Christian ministry than his rap career these days, even he must be embarrassed by what appears to be a RAGING boner he sports throughout the clip in the presence of the beautiful women the song references.

The video proved to be SO controversial that Hammer actually had to reshoot it, releasing it as “part two” in the series, but he was still supporting a suspicious bulge in his Hammer Pants as he did his Hammer Dance. It’s hard to say whether him wearing more clothes makes it better or worse.

Critics still took aim at the fact he seemed to be swagger jacking straight from Death Row in the new video. It’s hard to deny that in the new clips he looks like he could be rolling through Compton with Dre and Snoop. It’s not a coincidence either — he wound up signing with the label a year later. Ultimately he left after Tupac Shakur’s untimely passing without releasing an album, but it’s clear on “The Funky Headhunter” that he was pursuing a new G’d up from the feet up musical direction. Singles like “Don’t Stop” pulsed with what the choral singers described as “O.G. funk” thanks to samples from George Clinton and Tom Browne.

“I keep on tryin to tell y’all/You keep dissin and dissin and dissin but I don’t fall/Yo, tell me who gots da props? (I got da props!)/Tell me whose got the loot? (Hammer got lots!)” Clearly that was before he went bankrupt in ’96. Even those the excessive posturing from the man behind pop songs like “2 Legit 2 Quit” and “Addams Family” seems comical, there’s an untold truth behind the album you might find surprising — “O.G.” Hammer was closer to the truth than “M.C.” Hammer. He actually WAS connected in Oakland, and if you dared to cross him or insult him, there could be dire consequences. If you’ve never heard MC Serch talk about Hammer flexing his muscle to put a contract out on 3rd Bass, it’s quite an eye opener. Even with his brand new sound, Hammer still tried to put out dance friendly songs like “Break ‘Em Off Somethin’ Proper” and “One Mo’ Time.”

“I’m goin for mine, one mo’ time/I’m gettin my goals accomplished while the others sit back and whine/None of y’all can fade me, so don’t even try/Cause I’m the best at what I do and I’ma tell you why/You see I’m 2 Legit, 2 ever Quit.” These bars illustrate Hammer’s problem in a nutshell. Problem number one — he’s trying to flex as a lyricist but puts so many syllables in one bar he almost misses the beat. Problem number two — even though he’s now portraying a harder image he never cusses or swears on his records. Like the late Eazy-E once said, “I never met an O.G. who never did shit wrong.” Problem number three — despite trying to shed his pop music image, he can’t HELP but be proud of his previous successes and millions of record sold. Hammer can’t escape his past while he’s still referencing it.

Oddly though “The Funky Headhunter” isn’t really a BAD album. This was the source of several contentious debates I had in my college days, because like many others I found the new “hardcore” Hammer to be a silly concept with an absurdly pornographic video that only made matters worse. His defenders had a point I adamantly refused to accept — even if going from pop rap to G-funk was a swerve so bad he could only crash, the music was actually good. I concede. “It’s All That” is a highly listenable song as are so many others on this CD. It sounds like a 1990’s collision between Teddy Riley and Warren G and it works perfectly.

In retrospect there’s no way Mr. Burrell can deny the derision that would come from such a drastic makeover. It smacked of a desperate attempt to stay relevant in the face of a changing musical scene, and it wreaked of being inauthentic because he wouldn’t go ALL IN on it. The gangsters of rap were smoking weed, drinking 40’s and fucking bitches all over their songs. Hammer looked tougher and sounded rougher but underneath the surface he was still as clean cut as ever. Enough of his old fans stuck around for the album to go platinum, but when you’ve gone EIGHT TIMES platinum in the past, that actually seems like a failure by comparison. I can’t deny the transformation is comical, but it’s also not as terrible as first I thought.