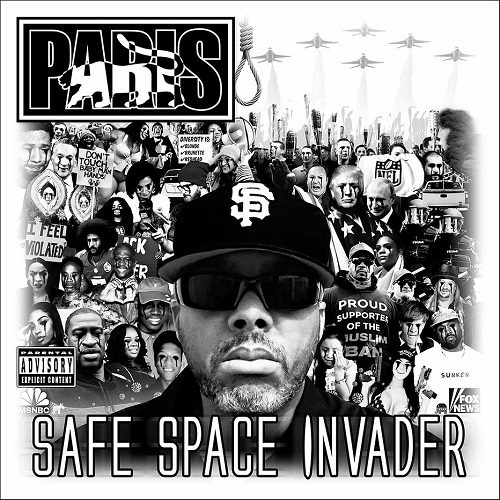 Hip-Hop listeners of a certain age can easily get the feeling that rap wrote the soundtrack to current events decades ago. There may even be some of us who maybe didn’t quite get the message the first time around but more recently realized that the rappers they listened to in their youth weren’t bullshitting. Officer. From overseer. Remember that one? Then it won’t be the only one.

For those who experience such deja-vus, sometimes it seems like the only obsolete song from yesteryear is Ice Cube’s “Who Got the Camera?” from 1992 because everybody got a freaking camera now to record abuse of power on the part of authorities. And if you heard these songs before but it took the omnipresence of cell phone cameras (and dashcams, CCTV, body cams, etc.) and social media platforms to make you comprehend how deeply-rooted systemic racism really is in the United States, well, there you have it, your white privilege.

Having said their piece, most of the MC’s who wrote these evocative songs eventually stepped away from the mic, often continuing their career in other media. There were times when it seemed that their voices were needed on the rap front, but in reality each era has its rap artists who talk sense. A few of the old guard stuck around, though. Paris did put his mission on pause at times, but establishing Guerrilla Funk Recordings in 2003 (and obtaining all rights to his music) ensured that his trademark political commentary and militant message would continue to be broadcast.

Now, just weeks before the 2020 presidential election, Paris drops “Safe Space Invader”, a timing and a title that promise the tackling of current issues. What plays into Paris’ hands is the fact that some of these issues are wounds that have been festering since forever. Just don’t expect him to suddenly develop healing powers. The conciliatory tone is not in his range. The government and law enforcement at least are institutions that are beyond remedy in his worldview.

While from Paris’ perspective it may seem like not much has changed in the 30 years since “Break the Grip of Shame”, new generations have come to grips with the situation in their own way. The album title leaves a clue as to Paris’ relationship with more contemporary causes young people fight for. Invading someone’s safe space verbally or physically would be a willful violation of such a safe space and its very purpose. (Bursting filter bubbles would perhaps be just as material, but it wouldn’t provide as much action.) At the same time the colonization of the American continent itself is the story of Europeans on the pursuit of a safe space (inevitably invading someone else’s territory in the process, on such a scale ultimately a genocidal act), and if white privilege is its own kind of safe space, political scaremongers try to fan suburban and rural fears that it is about to end. Paris in turn seems to long for safe spaces for the underprivileged, contemplating “nation-building with my comrades” on “Somethin’ ‘Bout the West Coast”.

Despite submitting to somber observations, Paris maintains his idealism about black and brown communities who are able to operate self-contained, finding inspiration right at home in the Bay Area in that regard, looking to spark a militant community spirit in “Chain Reaction” and lamenting the dispersal of such communities in “Turned the Key”, which looks at the ongoing gentrification in Northern California in detail.

Assuming that veteran political rappers have a new generation to call to arms at each turn, an album like “Safe Space Invader” can make sense. Recording new material prevents Paris from being the kind of relic whose explosive songs you stream on YouTube just to ponder how different rap used to be in the days of old. An MC who once made a song about POTUS 41 now has one for 45, that only makes sense. “Ask yo predecessors how I gets down”, he warns on “Nobody Move”. The album’s official Trump song, “Baby Man Hands”, reveals a satyrical streak but is no less scathing. Paris, that’s 30 years of militant, pro-black, business-minded, tough-as-nails rap rhetoric. This artist embodies continuity and currency at the same time, so it seems.

What thwarts the effectiveness of Paris’ message are his one-dimensional approach and uncompromising stance. In American politics, both the left and the right have seen a notable diversification in recent times. That means more allies and more enemies for Paris, yet the codes he uses make it seem like he is still stuck at the junction betweeen the Black Panthers and the Nation of Islam. Are terms like “this cracker” and “these devils” really pinpoint characterizations of what minorities are dealing with in 2020?

You couldn’t fault Paris for replying that it’s all essentially business as usual. Some of the crucial points that “Safe Space Invader” makes are not at all out of the ordinary for rap from Paris’ generation – the advocation of self-defense, the rejection of ‘peace’ as a casually promoted political mean or end, the emphasis of street credibility, the idealiziation of the Bay’s hustling ethic, etc. Paris holds these values high, while he sees little sense in peaceful protests:

“Cause protests only placate the people
Protests only mitigate response to evil
Go test if his vest work, tell me if his chest burst
And see if these devils really want upheaval
Bald eagles get barbequed, nigga feel me?
Make these pigs squeal ‘fore you steal and burn the city
Apply pressure in the only language that they traffic
And let’s see how many of ’em really want that static”

Still on a whole “Safe Space Invader” sounds like an opportunity missed. In one instance, he reminds the younger generation that he too felt the “hell [of] being black and young” just to follow up with a claim of “OG status”. Which he doesn’t use to offer words of support or encouragement. Instead he takes jabs at “Black Twitter” and “woke and enlightened muthafuckas [who] got all the answers but ain’t got no reputation in these streets”. And all this while trying to rally supporters himself on practically every song. Undeniably out of sheer necessity: “So I steady make the sound till the people come around / Don’t just film and stand around next time they got us on the ground”. Paris takes the term ‘freedom fighter’ very literally and mistrusts “warm embraces of toxic love”.

“Safe Space Invader” is an old school Paris album. Same stern delivery of sometimes surprisingly sophisticated rhymes, same brute funk with equally surprising melodic touches. From the ground-level reporting of “Bang Bang” to the celebratory “Chain Reaction”, as a producer and rapper Paris knows his stuff. He sics the ancestral spirits on Kanye West on the hyptonic, percussion-heavy “Return of the Vanguard” and works the old panther power on “Walk Like a Panther” with its message that it’s the attitude, not the accessories that make the man.

Die-hard fans will applaud Paris for taking a necessary stand, and he certainly gives them what they want, “comin’ hard with hard looks and hard facts”, “hard proof and hard raps”. Such as: “I’m fresh out of tears, fresh out of fucks I can give / fresh out of love long as police shootin’ at kids”. Newcomers with an interest in political rap are advised to look past the politically incorrect facade but also to ultimately make up their own mind about the message relayed. Maybe both parties can develop the “reciprocal respect” Paris talks about in “Chain Reaction”. “I try to represent the struggle”, he reflects in “Turned the Key”, and he lives up to that legacy perhaps not in the most representative but in his own characteristic way.