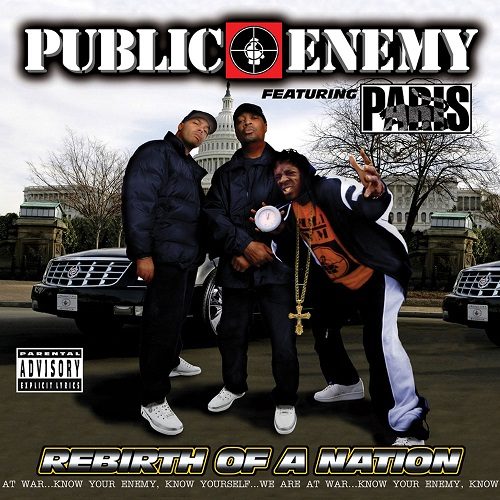 If you were born and raised on intelligent, rebellious, angry and articulate hip-hop with hard beats and fiery rhetorhic, the merger of Paris and Public Enemy is like a dream come true. The latter is famed worldwide for the tag team duo of the thought provoking lyricism of Chuck D and the clearly half-out-his-mind antics of Flavor Flav. While many other groups formed in the late 1980’s have long since flamed out, P.E. dropped “New Whirl Odor” in 2005 and sounded just as relevant as ever. In the era of right-wing conservative ideology and loudmouth twats like Bill O’Reilly P.E. represents the true “Fair & Balanced” news, as Chuck himself decries both racism from the outside and ignorant behavior from the inside. Paris is a hard rhymer of the same stripe who achieved fame in 1990 with “The Devil Made Me Do It” but had the unfortunate luck of coming along a few years after P.E. Caught up in the reactionary corporate response to Bodycount’s “Cop Killer,” Paris lost his deal with Tommy Boy Records and had to distribute his sophomore record for delf. Promoting knowledge and wisdom as the rising tide of gangster rap and “bling bling” was hard enough, but poor distribution ultimately made the whole thing futile. Paris hung up the mic in disgust in 1998, until events in a post 9/11 America inspired him to return in 2003 with the powerful “Sonic Jihad.”

Now Paris and Public Enemy have decided to pool their resources, and the 2006 release “Rebirth of a Nation” is the result. Most of the audience for this album will probably get the reference in the title, but for those who have never followed either’s music or studied film it’s a play on the title of D.W. Griffith’s movie “Birth of a Nation.” Griffith is a source of continuing controversy in cinema as he is both highly regarded for innovating new filmmaking techniques and highly scorned for using those techniques to make a movie which essentially glorified the Ku Klux Klan. So widespread was the uproar over this film that it alternately either sold out packed houses or ignited searing race riots in every American city where it was shown, and Griffith certainly profitted from the controversy. Ironically he spent grand sums to redeem his public image and prove he was not a racist filming “Intolerance,” which was a colossal box office failure and bankrupted his film company. 90 years after that film’s release, Public Enemy is reshaping the title of Griffith’s original vision with a whole new vision. After all did you expect Chuck D and Paris to rap about white power? HELL NO. The “Rebirth” they envision here is a return to when rap was simultaneously relevant as social commentary and dope headnodding jams, and the “Nation” is clearly those who have been systematically disenfranchised dating all the way back to Ronald Reagan’s “trickle down economics.”

Produced entirely by Paris, “Rebirth of a Nation” is a ticking musical timebomb with the raw anger that informed songs like his opus “The Hate That Hate Made” seething just under the surface. What’s more surprising is that Paris is actually the ghostwriter behind many of these rhymes, meaning that for the first time in his career the words Chuck D is speaking are not his own. This would be a criminal act if Paris weren’t as politically militant and powerfully pissed off as Chuck himself, and as a result of Paris cleverly inserting certain P.E. trademarks into the songs including Flavor Flav’s legendarily zany antics, it’s hard to tell the difference if you’re not informed in advance. Chuck’s rap in opening “Raw Shit” sounds exactly like what he would write left to his own devices:

“GOD DAMN I state with my fist uplifted
In a state where our freedom is severely twisted and
abused, I’m used to rhythm of rebel
I’ve been fightin this shit with the volume level up to
ten and spendin my time on the rhyme battlefield
Watchin as my brothers are killed with no justice
or peace, in the middle of hell
And I was out on the Isle when the two Towers fell
So now you’re gonna tell that the war is won
and what’s done is done, an all-good _Son of a Bush_
I’ve been there before, “got a letter from government”
Slid underneath, my front door
The poor get fucked while the rich is still amused
And what’s left of the Bill of Rights is pimped and abused
While the patriots actin like kings
But the black is back, I’m all in with the noise I bring!”

In other tracks it’s a little more evident that Paris is the author, as it’s impossible for him to avoid the kind of phrasing that has been his trademark since the early 90’s. Listening to “Rise” you hear the bursts of sonic noise beneath Chuck D’s vocals that were a Bomb Squad trademark, but when you examine the actual raps delivered closely you can easily interchange the angry growl of Paris’ flow in your head for Chuck’s own:

“I got my eyes on the lies from Washington
I’m a survivor, I know how the West was won
See a show and tell, the way the CoIntel
undermind the REAL hip-hop so the cops can trail
But know bad boys move in silence
Save us all from the pain of a life of violence
They tappin my phone, full grown and knowin
And still prone to refute the lies, won’t stop until we rise”

Hearing Chuck D and a variety of handpicked guests MC Ren, Kam, Dead Prez and Paris himself rap over these beats is a sweet treat. Energetic posse tracks like “Can’t Hold Us Back,” the trunk rattling “Hard Truth Soldiers” and the straight from 1990 funk of the “Field Nigga Boogie (Remix)” featuring Immortal Technique are ideal examples of this phenomenon. Still the most powerful and provocative of the songs are the ones performed solo by either Public Enemy or Paris, such as the simple bass and drum pound of “Make it Hardcore” or the heavy-handed “Hannibal Lecture.” The latter opens with a speech excerpt from Malcolm X discussing the “American nightmare” before the Paris tears the beat up:

“We bumpin hardcore, heavyweight, b-boy blast
On the street they hear my beat, my 69 is fast
Smash down Lennox, head up to the ‘View
Some reporter wanna holla and I said it was cool
Wanna know about the album and the Enemy’s new
How P.E. and Guerilla Funk is keepin it movin
Breakin bread talkin politics, you know how it go
‘Bout the war and how it’s shitty that we murder for dough”

Don’t think Flavor Flav doesn’t get his chance to shine in the spotlight though. What would a Public Enemy album be without at least one screwball zolo track from the clown prince of hip-hop? You’ll find that refreshing chance of pace on the aptly titled comedic jam “They Call Me Flavor”:

“Now they call me Flavor
I’m in the shot that you shoot when you swishin
I’m in your dip and your dive when you dippin
I’m the aroma in your motherfuckin kitchen (Now that shit’s hot!)
Now they call me Flavor
I’m in your mouth when you wake up in the mornin (DAMN!)
I’m the stink on your breath when you yawnin (WHAT!)
I’m in the milk in the cows of the corn an’
Flavor Flav is the Flav, a mack
Flavor Flav will never stick you in your back”

There are a lot of hard-hitting topics on this album, which is exactly what you’d expect from a Public Enemy/Paris collaboration. “Plastic Nation” is a strong condemnation of cosmetic surgery, encouraging sisters to embrace their natural beauty instead of trying to “be Janet if she took the knife.” The team draw inspiration on the track “Invisible Man” from the Ralph Ellison novel of the same name, as Chuck questions why “home gotta be where the negative roam.” At times though you can just sit back and enjoy the sonic blast as they “Pump the Music, Pump the Sound” on these 16 choice cuts. Some will say being militant and belligerent is irrelevant in 2006, but with American men and women dying overseas while a gung-ho Republican President tries to pull the wool over our eyes and make us believe it’s all to protect us from terrorism, the words Paris spits in the opening of “Make it Hardcore” are more relevant than ever.

“Ain’t that a bitch, I heard somebody think
Rap is dead cause people runnin out of shit to say
So ridiculous and so absurd
I was almost at a loss for words, then I started to serve
Off the line of the Enemy’s mind
Back in 2005 droppin hammers without the time
Bring the ruckus from the booth to the hood
Motherfucker cause it ain’t all good, now I wish they would
Get yo’ vest on, we rain on Babylon
The anti-Fox News, anti-pop, original group
P and the Enemy policin the beast
Until we rise it’ll never be peace, I put that on Jesus”