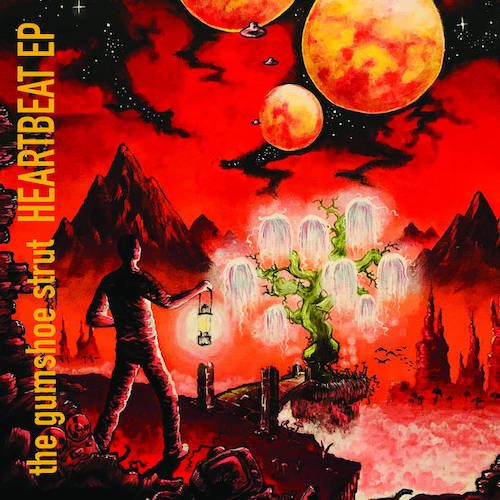 I had to go all the way back to 2003 to find a reference to Gumshoe Strut in our archives. I’m sure it’s the same guy given that the previous review was for a Canadian indie rap artist, one who let Gumshoe pull double duty on production and guest vocals, and he clearly liked Mr. Strut enough to give him verbal shoutouts on the tracks. If nothing else that proves that Gumshoe has an incredible amount of longevity as an artist. Careers often last a few years or less in hip-hop as artists become despondent about the million-to-one shot of making a living from their music. If you’re the kind of sincere person who takes things to heart, it has to be even worse seeing new artists shamelessly rip off whatever is currently pop and trendy, succeeding through a complete lack of talent and creativity while you’re still struggling.

Some of that bitterness comes through on “Drip” featuring Rob Crooks from the “Heartbeat EP,” but I’m the kind of guy who likes drinking IPA so I don’t mind a little bitterness. “We bite much bigger than bark/When the going gets tough, we retreat in the dark.” That’s an almost uncomfortably raw level of honesty, but it has nothing on Gumshoe barking “They say the world’s going to shit/but you know that it’s been going that way way before the 45th/Before they protected capitalism with fascism/Before the KKK was active in Saskatchewan.” The rapper even proclaims that “Canada has no right to exist,” which means he’s making no friends on EITHER side of the border.

At this point you might ask yourself “Is this a half hour of whiny self-indulgent rap music, pissing and moaning about Gumshoe’s bad lot in life? Tough luck EH?” Well as Rob Crooks says on the song, “You’ve got two choices — you can join in or you can sit at home.” As much as it sounds like Mr. Strut and the quixotically named Saskatoon Folk Rap Records might be tilting at windmills just for the selfies, there’s a sincerity to self-produced raps like “Love 40” that’s hard not to be charmed by. Don’t confuse “charm” for meaning “aww isn’t that cute, at least he tried.” No. “Charming” in this case indicates that Gumshoe’s struggles are relatable to the listener.

“I put in work every day with a smirk on my face
with a shit eating grin, ‘What’s the worst it can taste?’
First in the place, last out the door
Contrast, first rap made back in ’94”

Unless you were born with a silver spoon in your mouth, Gumshoe Strut is talking about the same things we all go through collectively. Life is hard, it’s very often unfair, but we suck it up and keep on pushing through somehow and some way. If the tracks weren’t well constructed and easy to listen to the words might ring hollow, but “No Wonder” shows the beauty that comes from fresh production styles. There’s no Tay Keith or Murda Beatz here — just the kind of quirky freshness that will remind you of independent rappers from Minneapolis without blatantly biting their style or sound.

People send emails to RapReviews all the time soliciting our coverage. That’s not meant as a brag. If you run any kind of magazine, blog, newsletter or rap website, you’re going to be hit up constantly around the clock. The more polite among the inquiries will say something like “What’s your submission process?” To be honest it’s not a question that should be answered. That implies you can somehow get the inside track to being written about or featured if you’re willing to follow a fixed set of rules. The only rule that matters to me is “be interesting.”

The Gumshoe Strut and his “Heartbeat EP” are certainly that. He’s not exactly a rapper that’s easy to recommend — he’s very soft spoken, very thoughtful in his verbiage, and very clearly cares about his craft. You might think that ticks all the boxes, but only if that box includes a glass of Scotch, a pair of fuzzy slippers, and a warm toasty fireplace. If there’s such a thing as an “average rap listener” that wouldn’t be a completely unpalatable collection of cliches, Gumshoe is most certainly not for him/her/them. If you like INTERESTING rap music though that’s as good to listen to as think about though, he’s worth a try.