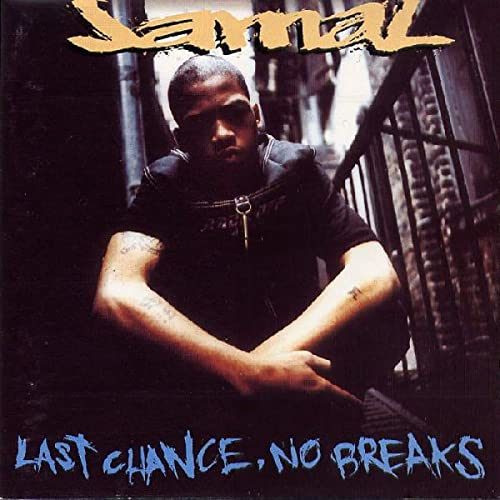 The early 1990’s featured an explosion of pre-teen and teenage rappers in a blatant attempt to market rap music to a younger audience. Success breeds imitation and the massive success of Kris Kross led to even more youth rap groups. Producer Jermaine Dupri was responsible for taking his backward jeans wearing proteges to mainstream fame, so producer Dallas Austin tried to follow the exact same formula with Illegal. Jamal and Malik were even positioned as the “anti-Kris Kross,” dissing them on records and presenting themselves as more streetwise and rowdy than their youthful rivals. I’m not sure how well it worked but “We Getz Busy” caught my attention thanks to a fat track (and cameo) from Erick Sermon. “Ah, makes me wanna holla!”

It only took a couple of years for Jamal to want to shed his “hip-hop kiddies” image, even though Illegal had been positioned as the more mature rap group of the crowded field. “Mature” is definitely the apt word though because he hit 16 before dropping his solo album “Last Chance, No Breaks” and it shows in how testosterone flooded his system. His voice changed so much I could have believably think he had jumped from pre-teen all the way to his 20’s. Thanks to his friendship with Erick Sermon he was officially considered a protege of the Def Squad. That relationship is evident on almost every one of the album’s 11 tracks including the Redman and Rockwilder produced lead single “Fades Em All.”

“I represent the East, when niggaz ill, fuck peace!/All that shit you talkin nigga, that will get yo’ ass deceased.” This is about as far from crossover kiddie act rap as you can get. Jamal raps about drinking 40’s, smoking blunts, getting laid, and proudly proclaims “Now who the fuck wanna see Jamal? I fades em all” on the chorus before Notorious B.I.G. samples from “Ready to Die” inform us that Jamal can “drop lyrics on and off like a light switch” and that his Glock is “making motherfuckers duck.” I’m not sure you can find a more cocksure, boisterous, self-confident transformation than the one Jamal made from duo to solo act. It’s not as though he didn’t have swagger in Illegal, but on songs like “Keep It Real” he turns it up to 11.

“Look who just jumped up on the scene, pocket full of green
Butter leather and all, I beez that nigga named Jamal
Mackin hoes in the tight clothes with pretty toes
Kickin flows for all the rowdy bros and it goes, look
1, 2, to the break of 1-9-9-5
Jamal represent and keep it live”

With lesser production or a voice that cracked from puberty, the whole thing could have wound up seeming like a “try hard” effort that was comical in its exaggeration. You can’t front on the smooth Erick Sermon piano instrumental for “Keep It Live” though, and Jamal rightly pays tribute to “the Funk Lord track” that makes him sound so phat. The Def Squad doesn’t just work with him behind the boards though, as Redman steps up to the mic on the Easy Mo Bee produced “Insane Creation” for a duet.

The George Washington Jr. “Hydra” sample immediately makes me think of Black Moon, and although I prefer “How Many MC’s” to this song, I’m not mad at Mo Bee for using it too. We can’t mention Def Squad cameos though without addressing the massive and ominous posse track “Genetic for Terror” featuring Keith Murray, L.O.D. and Redman too. Murray rips the track so hard on his opening verse that he makes it nearly impossible for anyone to follow him. “Those who doubt it, can kiss my ass and make a love song about it!”

From what I can see no major mistakes were made on “Last Chance, No Breaks.” Some tracks like “Don’t Trust No” are just ehh okay but there’s nothing straight up BAD here. It doesn’t seem like this album had any commercial traction though, perhaps because Illegal was already the “harder” kid rap group, so it didn’t necessarily excite people for Jamal to get even HARDER than that. He was left in the uncomfortable “Situation” of being too old to be marketed to juveniles, but too young to be be taken seriously as a hardcore rapper despite having practically the best possible team behind him to ensure a successful debut. Mike Dean, Erick Sermon, Rockwilder, Redman, Easy Mo Bee — I mean come on. That’s just ridiculous.

Being caught between worlds meant a fledgling label like Rowdy Records (it shouldn’t surprise you that this was a Dallas Austin imprint) had a hard time marketing Jamal, and this album got no higher than #198 on the Billboard Top 200. As a result the print run of this CD was very short and some copies sell for $25 or more (though the average is closer to $20). Many albums lose value over time, so the fact that this one is worth more now than when it dropped is a testament to everybody involved, even if only peaked in price because it was a commercial flop the first time around.